Poor old blended whisky. In this brave new world of boozing, where ballsy ryes proclaim their 95% rye mash bill, of high proof spirits and super-hopped IPA’s, spirits like blended whisky can get a little lost in the noise. It’s not that the spirits aren’t well made — on the contrary, really, because the art of blending and creating a consistent product year in and year out is one of the toughest gigs in the business. They are perhaps a victim of their success. They are designed for easy drinking, to be rounded and smooth and accessible; the same qualities that bartenders tend to grow weary of after a while, as we’re always on the hunt for something new, something novel. But our panel was greeted with a mixed bag in this tasting, ranging from two stars to five stars. And there were some surprises; the lads from Shady Pines, its safe to say, didn’t expect to like the Chivas Regal 18 Year Old when things were revealed at the end of the tasting: but the Chivas was the standout of the group, complex, unctuous, powerful and seriously satisfying drop. Also scoring well for the panel was the Black Bottle, a blended whisky with a high proportion of malts from Islay, which accounts for the strong whiff of smoke that leapt from their glasses when tasting it. Surprisingly, none of the bartenders were aware of this blend. The other standout performer was the Ballantines 17 Year Old, the driest whisky of the tasting.

Click on the image below to see a larger version: 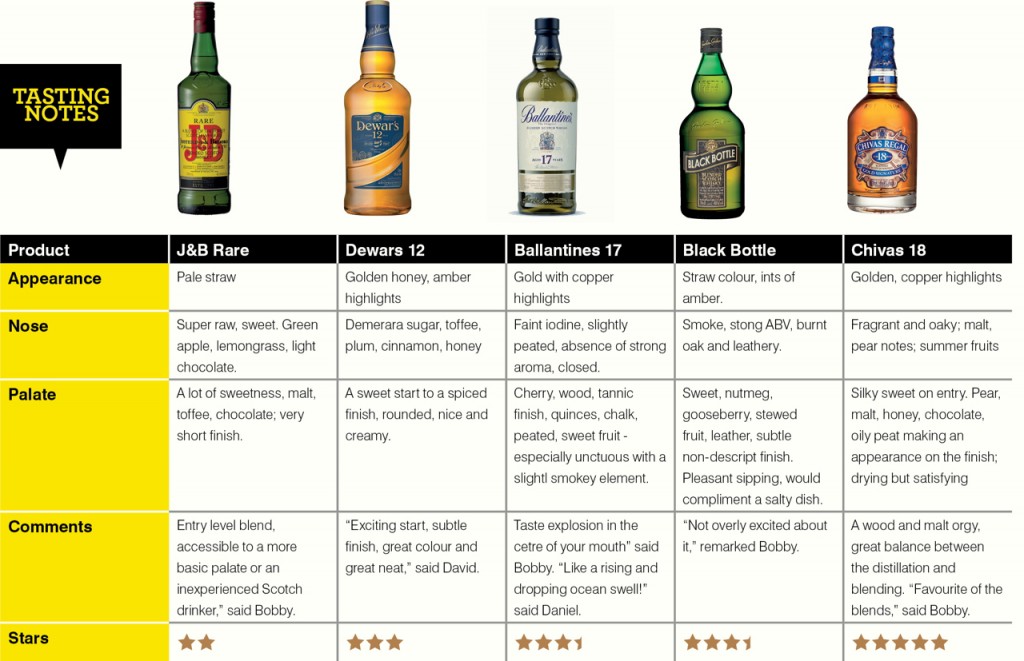