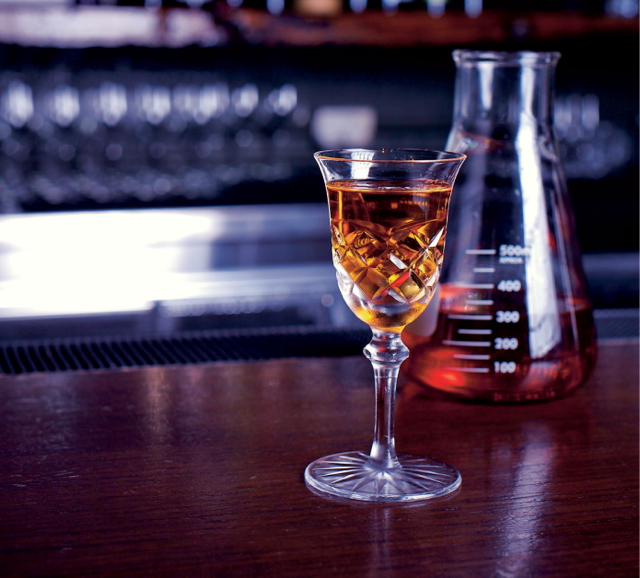 At its simplest, Rock and Rye was little more than rye whiskey, its edges rounded out by a little rock candy syrup. Indeed, that was how Harry Johnson prescribed it in his 1882 Bartender’s Manual. It was a simple preparation: the barkeep only needed to place a whiskey glass in front of the customer, pour in some rock candy syrup, place a spoon in the glass, and “hand the bottle of Rye whiskey to the customer, to help himself.”

It’s not dissimilar in nature to Drambuie (itself a spiced, full strength whisky liqueur), but in the US many old producers flavoured it with horehound and lemon. Horehound was often used in candies and in throat lozenges, and has a musky, bitter flavour. A cousin of the Toddy, the Rock and Rye uses a little less water than does your garden variety Toddy. Part of that is because rock candy — otherwise known as rock sugar — comes about by way supersaturating sugar in water. Regular simple syrup sees sugar oversaturated in water — rock candy syrup goes way beyond that, and as a result, dilutes less for the same amount of sweetness.

It was as a cure for the common cold that it spread in popularity, and came in candy as well as liquid form.

In 1886, The New York Times recorded that candy-sellers Jacob and Max Hess were fined for selling adulterated Rock and Rye candies, that were responsible for making children feel sick (it wasn’t the rye that did them in, mind; they were found to include fusel oils). In 1893, the Times noted the reviving powers of Rock and Rye: they recounted the case of one man who was called before an inquiry but was so frightened he “nearly fainted. He stumbled toward the door and sank into a chair, deathly pale. Fortunately Mr. Dunn had a bottle of rock and rye at hand, and the nervous Mr. Henry was led into another room and revived.”

One supposes that’s not the only time rye whiskey has had a role in quelling a man’s nerves.

Rye whiskey was the base for a number of proprietary medicines, but also home remedies, like those outlined in Mother’s Remedies by Dr. T. J. Ritter in 1910, among them a recipe for cough syrup, a “reliable mixture in severe cases”. It included oil of anise, syrup of balsam of tolu, licorice, and a good pint of “best rye whiskey”. Whether or not it cured a cold, that mix will likely put you to sleep. But the book’s effectiveness as whole might be a little tainted by the ingredients it lists in other recipes  — lead, kerosene, turpentine among them.

So perhaps Harry Craddock had it right when he included a recipe for rock and rye in the Savoy Cocktail Book. He kept things simple: pour out some whiskey, add a touch of sugar, and if you want, some lemon juice. Though you could argue that it ain’t Rock & Rye if there is no rock candy in the mix, we though we’d update the recipe a little based on a taste of Shady Pines’ recipe which derived all its sweetness from the spices it employed. We used dates here for flavour and more pronounced sweetness to mellow out the rye.

We’ve used wormwood instead of the traditional horehound, for no other reason than we had some wormwood on hand. Both ingredients have been used medicinally for centuries, and both will make drinks unbearably bitter if left in the infusion for too long or applied in too great a quantity. You’re just looking for a pleasant bitterness here, nothing else.•

We’ve added Peaches to our Rock & Rye, but you could use any fresh, seasonal fruit that has a complimentary flavour profile.

Check out our Rye Blind Tasting for more tasting notes about the Woodford Reserve New Cask Rye. It’s bottled at 42.6 per cent ABV so it took some taming from the other ingredients; the flavours imparted from the new, charred American oak really anchors this preparation.

0
Australian Bartender June 3, 2013
No Comments Yet