We celebrate a massive milestone and look to the years ahead 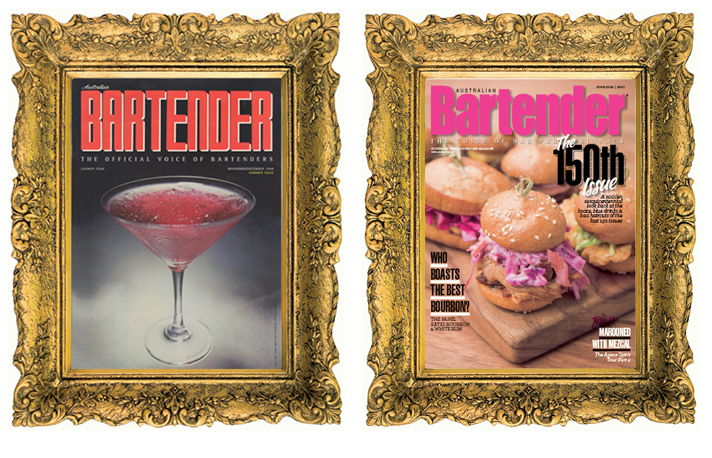 It sounds big and, well, I guess it is a bloody big number! And even though it’s just a number it represents close to 15 years of non-stop hard work publishing what is the leading bar trade magazine. So much has changed over the years and for the most part for the better. People are drinking better and bartenders are better trained and more educated than ever before. Let’s not forget, the standard of bars around the country is amazing if you compare cities like Brisbane or Sydney in 1998 to today.

Even though it was many years ago I remember launching Bartender like it was yesterday. I was 23 years old and had been a bartender for five years since I left school. Such venues like The Greenwood in North Sydney, Mr. Goodbar on Oxford Street, The Beachwood Bar & Grill in Bondi but mostly at the popular Fringe Bar on Oxford st. It was at the Fringe that I hatched my plan to be the first to create a magazine for bars and bartenders in Australia. I must admit I got great inspiration from seeing CLASS magazine launch in the UK in 1997. Most people wouldn’t be aware that Bartender wasn’t my first magazine – I actually started it off by calling it Bite magazine and catering to restaurants as well as bars. Bite was a struggle to be honest and after a year of doing it I decided to rebrand Bite to Bartender and focus on bartenders and drinks rather than including crap stories about deep fryers and frozen food! As soon as I did this it clicked immediately with booze suppliers and within six months went from bi-monthly to monthly. Let me point out that none of the Bite magazine issues are included in the 150 issues.

When we started I was lucky enough to have Naren Young involved and the magazine went full tilt promoting the trends at the time like …oh, wait for it – flair bartending, flavoured vodkas and anything muddled (aka stick drinks). People like Jason Jelicich were leading the way with flair and the team at Longrain in Sydney can probably lay claim for kick starting the stick drink craze. Bars like The Gin Palace and The Melbourne Supper Club were setting the benchmark for great drinks and service. The arrival of the 2000 Olympics provided a huge opportunity for the Sydney industry and my good mates and very young operators at the time Mr. Fraser Short and John Duncan launched Cargo Bar, which even as a pub felt more like a bar and laid the foundation for many more pubs to follow. (It wasn’t until Clover Moore introduced the small bar licence a couple of years back and small bars started to boom). Justin Hemmes and the Merivale group changed everything with the launch of Establishment in 2000, and in my opinion has been the most influential person the hospitality industry has ever seen in this country. Justin Hemmes is a pioneer and our national industry has been much the better thanks to his innovation. Also up north people like the Bickle family in Queensland took the nightclub scene to new heights with The Press Club and Family nightclub a multi-level wonderland that still goes strong today. Also great people like Ellie Moubarak opening the Lychee Lounge, a cool small bar and of course the opening of The Bowery, which became known for its kickass cocktails, with the likes of Matt Hewitt and Barry Chalmers showing the rest of the country how a classic is done. Let’s not forget our friends out west as Luxe Bar hit the scene like a lighting bolt and was the best bar in town for many years as well as being a training ground for many of the best WA bartenders both past and present.

When you look at the bar landscape of today we see many of the influential bars of a decade or so ago still doing well. I hope this will give drinkers of tomorrow many true classic bars that can lay claim to some respectable heritage. Let’s be honest we have lost way too many historic bars over the years like The Bayz, The Bourbon & Beefsteak (no, the recent shiny re-incarnations don’t count) and most recently Der Raum in Melbourne and the bartender’s favourite in Sydney Café Pacifico.

Fast forward to today and it’s obvious to see that the industry nationwide is in love with all things Americana, speakeasy, Prohibition, punches, Tex-Mex and the mandatory hipster look with its all important beard for any self-respecting cocktail bartender. Also today bartenders have access to a huge selection of quality spirits. 15 years ago I think the only 100% agave Tequila on the market was Herradura and the other three were mixtos. In the past decade we have also started to see a real boom in exceptional craft beers that we now have access to from local and international brewers. Small bars are also flourishing around the country giving operators the opportunity to open weird and wonderful venues at a fraction of the cost of a hotel license and with real workability (not like the old restaurant rules of drink/dine).

All the way Bartender magazine has been right there to cover these trends and showcase as many great bars and bar professionals as possible. I’m proud that the magazine has been so loved and respected over 150 issues and hope we can publish many more into the future. I think the biggest achievement the magazine has made is giving bartenders a stronger voice and connecting them both nationwide and internationally with passionate and like-minded people. By reading the magazine people actually learn things and get ideas and what comes from such education is confidence. Give people confidence and they will enjoy what they do more and stay involved with the job they are doing. Keeping young bartenders in the industry and having real respect for the profession is something that was a major problem before Bartender magazine started beating the drum.

The success of Bartender magazine has also given us the opportunity to be the first in Australia to reward and recognise bars and bartenders with the launch of the Australian Bar Awards back in 2001. Also since 2002 and only stopping this year was the BarShow that with the help of Bartender magazine was the first trade show to bring people international heavy weights like Dale DeGroff, Gary Regan, Angus Winchester, Ian Burrell, Tony C, Julio Bermejo, Tomas Estes and Dave Wondrich, to name just a few. Then in 2009 our website was born and today the Bartender brand is growing even stronger online. And recently we became the first bartending trade magazine to be available in the Apple iPad newsstand.

I must point out that without the strong support of many great suppliers over the years Bartender magazine wouldn’t be possible. As a magazine that depends on advertising support it’s important that a huge thank you to our many advertisers both now and then be given. To the bartenders reading this magazine each month I simply ask that you all consider who advertises and who does not, and if this can factor into your decision on who you support behind the bar then that is a small way of supporting both Bartender magazine and those valued advertisers.  A huge thank you to the trade for supporting Bartender over the years and allowing a few of us here at Bartender HQ to make a living writing about things we love. Without question the biggest thank you is to my better half that runs this business with me and without her support the magazine wouldn’t be possible. Amy started out as a staff writer in 2003 and a good old-fashioned office affair soon started (she was engaged at the time!) and when she asked for a pay rise I thought it cheaper to marry her instead. Best decision I have ever made and any credit or recognition for the success of Bartender magazine belongs equally with this amazing lady, so thank you.

Finally I sign off this special edition by handing over the editor’s chair to Mr Sam Bygrave who has been doing a cracking job as deputy editor for the past year. Sam knows his stuff and looks forward to getting more involved. If you have enjoyed any of my features over the years then don’t worry I plan to keep very involved editorially – I’m just sharing the workload with the very capable Mr Bygrave.

Thank you everyone for all your valued support of the past 150 issues.