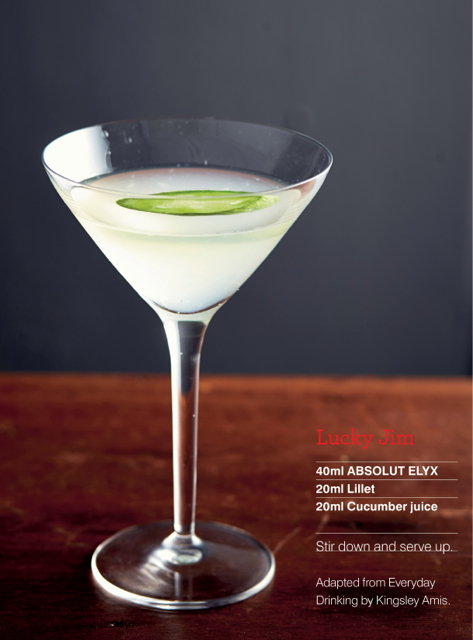 Vodka arrived on the scene later than other cocktailing spirits, only really hitting its stride after the second world war had wrought its destruction. So on the topic of vodka, the pages of the old cocktail books we often turn to are, for the most part, silent. Lucky, then, that there’s a rich vein of vodka coursing through the pages of some of the 20th century’s greatest writers, many of whom have turned to cocktails to outfit their characters with a certain quality (see Ian Fleming’s creation of the Vesper for James Bond).

The great English novelist Sir Kingsley Amis was fond of a vodka or four. He came to literary fame with his 1954 novel, Lucky Jim. The story concerns a young history lecturer, Jim Dixon, who finds a snobbish world on campus and a pompous know-it-all boss who is too much to bear. It’s a love story too, and Jim, being the lucky guy that he is, ends up with the girl and a plum job at the end of it. But Lucky Jim also contains one of the world’s great literary hangovers:

‘Dixon was alive again.  Consciousness was upon him before he could get out of the way; not for him the slow, gracious wandering from the halls of sleep, but a summary, forcible ejection. He lay sprawled, too wicked to move, spewed up like a broken spider-crab on the tarry shingle of the morning.  The light did him harm, but not as much as looking at things did; he resolved, having done it once, never to move his eye-balls again.  A dusty thudding in his head made the scene before him beat like a pulse.  His mouth had been used as a latrine by some small creature of the night, and then as its mausoleum.  During the night, too, he’d somehow been on a cross-country run and then been expertly beaten up by secret police.  He felt bad.’

Clearly Amis was no stranger to a hangover, and quite fond of a drink. And for good reason as his friend, Christopher Hitchens — himself a noteworthy boozer — would write in his introduction to Amis’ Everyday Drinking:

“It has been said that alcohol is a good servant and a bad master. Nice try. The plain fact is that it makes other people, and indeed life itself, a good deal less boring. Kingsley grasped this essential fact very early in life, and (so to speak) never let go of the insight.”

Our man Amis, writes Hitchens, was a slight cocktail bore — “or, at least, he had to affect to be such in order to bang out a regular column on drinks”. We can certainly sympathise with that. But he was also a pragmatic man. He recommended British vodka for this drink, “the cheapest you can find”. He didn’t think quality spirits belonged in a drink that was “mixed with fruit juices, vegetable juices, etc.,”. Instead one ought to “go for the cheapest reliable article.”

Well, that’s one thing we disagree about. The best advice is to use the best vodka you have to hand — particularly if its your first drink after the night before.

And if you were to go for the hair of the dog, perhaps his Lucky Jim – the drink — could do the trick. Amis describes it as a Gibson variation, and includes only the briefest pours of vermouth — which, as they say, was the style of the time. We’ve switched in Lillet — not of the Kina kind, mind — because the florals accompany cucumber a little better, and bumped up the proportions. 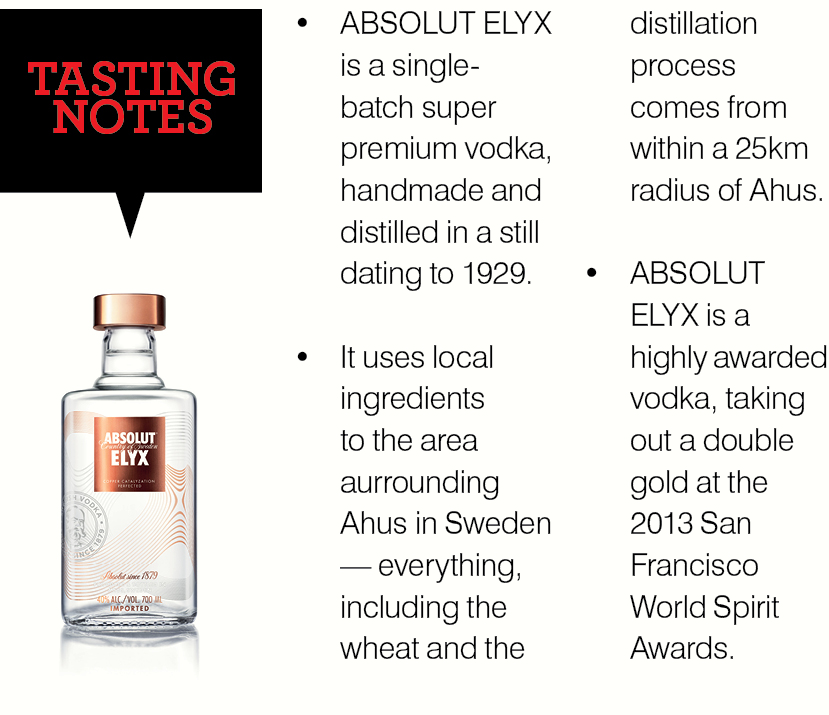