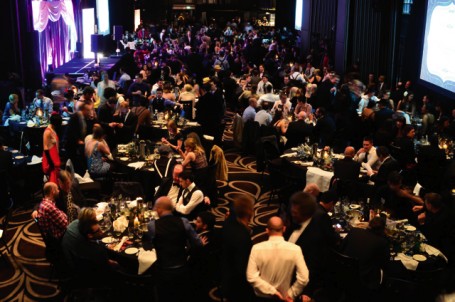 Since the end of voting in May, Bartender HQ has been buzzing – working tirelessly to thin down what was a jam-packed selection of venues, owners and bartenders. It’s finally done and the results are presented below. From what we can see they are the best and brightest of the Australian bar industry, drawn from a seriously talented pool who work tirelessly to keep their cities and towns at the forefront of fun – cause let’s face it, that’s what we’re all about. We would like to take the opportunity to thank everyone who is involved in the Australian bar industry, nominated or not, because without your hard work and dedication the professional bar scene would not be in the sensational shape it is.

Click here to book your tickets to the Bar Awards and Bar Week!

Each of the categories has been whittled down to the top eight nominations and from there a winner is awarded and announced at the Australian Bartender Bar Awards in September. The 2013 nominated finalists represent the best we have to offer – the bee’s knees of the bar biz. They reflect the state of excellence that is our current industry and Australian Bartender magazine would like to give a huge congratulations to each and every person involved in the finals.

Again we will be looking forward to a sensational night at the Australian Bartender Bar Awards. Expect excellent cocktailing at the pre-drinks and of course, the big twist for this year – the final round of the Bartender of the Year competition running throughout the night. Talk about ramping things up! There will no doubt be some shaky hands behind the bar. So be sure to book your spot if eligible, as this year’s finale will be a fitting way to cap off the Bar Week celebrations. We’re also heading back to Doltone House in Pyrmont for the Awards night and from the positive feedback we received last year, it is sure to be another night to remember.

*Please note that Bar Awards tickets are only available to finalists, fellow bar professionals and sponsors. Remember that this is a sell-out event so be sure to visit barweek.com.au right now to avoid disappointment.

And the finalists are… 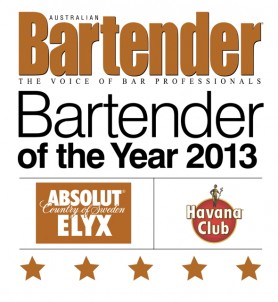 To check out all the competitors for this year’s Bartender of the Year sponsored by ABSOLUT ELYX and Havana Club, click through here.

Bar of the Year National

This category is for those venues that offer a complete experience. Finalists in this category tick all the boxes that a good bar should – fab fit-out, friendly staff and a bunch of menus overflowing with cocktails, beers, wine and nibblies. They are the one-stop-shop for a rocking night out.

Bar of the Year State Awards

You’ve been banging on about it for years. So here it is; a chance to honour some of the awesome bars in our cities and towns that have less of a populace to bolster their votes. Same criteria still applies – awesome venues with passionate peeps and delicious food and drinks.

Rookie of the Year

This award aims to recognise up and coming talent in the Australian bar industry. To be eligible for entry you must work in a bar and not have had more than two years experience come 31 May 2013.

As a real passion for quality imported and locally brewed beer grows, so too have the venues specialising in the service of fine brews. This award recognises those bars and pubs that have a great beer selection, informative service and beer knowledge that sets them apart from the pack.

New Bar of the Year

Many great bars opened around the country between June 2012 and May 2013. This award is designed to honour venues that continue to raise the standards by creating new spaces that keep everyone else on their toes.

There are venues that are instant hits with the punters and then there are those that have great street cred with the bartending fraternity. A true bartenders’ bar however must be a viable business as well as a late night bartender hang. With dedicated industry events and strong trade support the winner of this award is littered with off duty bartenders every night of the week.

Cocktail Bar of the Year National

Passionate bartenders nationwide have been mixing, straining, hard-shaking and experimenting with soda siphons for years, but sometimes you’d think that hot trends were only the domain of the hipster ‘tenders in Sydney and Melbourne. We’re here to tell you that isn’t the case. Read on…

New Pub of the Year

This award recognises the efforts made by hoteliers and publicans to open new pubs or renovate and reinvigorate tired venues. All of the following finalists have opened their doors in the last year, with new and inspiring concepts.

Nightclub of the Year

The award is for those venues that come alive in the wee hours, with a dedicated area for dancing and a music policy to match.

Pub of the Year National

No doubt one of the most prestigious awards. The finalists in this category offer a complete pub experience in style.

Pub of the Year State Awards

We live in a wide brown land that is famed for its pubs. And it’s about time that some of the lesser known watering holes were brought to the fore in front of their national peers. Plus, when you’re travelling, it pays to know where you can get a decent beer and a steak.

Bar Operator of the Year

This category will undoubtedly include some of the bar industry’s most passionate professionals. All of them are dedicated to the venues that they own or run.

We know, we know, you’ve been telling us for years about the bars outside the big smoke. And apparently some of them are pretty damn good. Well, we’ve listened and here the top picks for this brand new category.

This category is for venues that take real pride in their food offerings – while having food available is certainly part of being a responsible host, these bars take it to the next level, with food becoming a real draw card for the venue. This award is not about the food served in an adjoining restaurant, but the menu offered.

Wine Bar of the Year

All finalists in this category must have a strong focus on their wine selection and the staff that serve it. The venue must have an atmosphere conducive to enjoying all things vinous and sport a stellar list featuring a well thought out and interesting selection of both local and international wines.

Pub Operator of the Year

This award pays tribute to those individuals and companies that juggle the operations of several venues, including a hotel.

Bar Manager of the Year

This award pays tribute to all the hard working bar managers who usually stay behind the scenes and who are seldom recognised for their dedication to the bar industry.

Bar Team of the Year

It’s become a cult classic over the years and one of the most popular awards on the night. A cohesive bar team can make the difference between a good venue and a great venue. They all deserve a pat on back.

Some bars pour their heart and soul into their cocktail lists, constantly researching and revising their lists to produce the best possible selection. But the biggest isn’t always the best – the list must be easy to follow, take into consideration seasonal changes, drink trends, give credit where credit is due and always pay tribute to the classics.

Small Bar of the Year

Where would our industry be without diversity; without the little guy? This award aims to reward small venues (under 100 capacity) that are making big waves. Within years to come we hope to see this category grow as legislation right around the country has opened the door for a new wave of bars.

Training Program of the Year

This award rewards companies that make an effort to offer valuable training and education for the bar industry. The winning program must offer creative and innovative training that promotes professionalism amongst the next generation bartenders.

Brand Ambassador of the Year

The role of the brand ambassador continues to grow; not only do these guys and girls champion their own brands, but they play a valuable part in the education and development of Australian bar culture.

This prestigious award pays tribute to someone who has made a marked difference to the bar industry through their passion and dedication. As this is award is not a considered a competition no finalists will be listed. This year’s winner is respected Sydney bar and hotel operator, Fraser Short.

Beefeater 24 invites bartenders to compete in their Global Bartender Competition