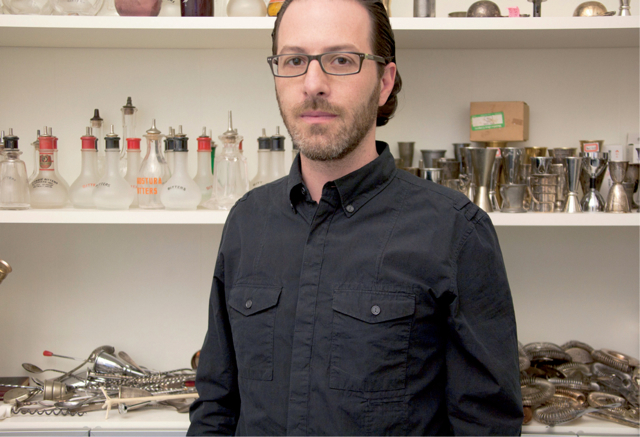 Lucky are those bartenders that start behind the bar these days. Not only do they have a cornucopia of cocktailing ingredients, they’re also coming up in a world in which fine glassware, elegant bar tools and a wealth of affordable cocktail book reprints are a given. That’s in no small part to guys like Greg Boehm, who’s New York-based company, Cocktail Kingdom, has been synonymous with cracking cocktailing gear. We talk to Greg Boehm about how Cocktail Kingdom came about, and his plans to build the business in Australia — which began at the start of this month (you can visit them at cocktailkingdomaustralia.com).

How did Cocktail Kingdom come into being?

My old family business published books by Salvatore Calabrese and when I opened my new company, Mud Puddle Books, we followed the same path. One of our first books was by Robert Hess. I also had a collection of more than 1,000 old cocktail books. Quite a few bartenders that visited to see the books mentioned that Japan had high quality barware. So, I sourced some Japanese barware and added that to our next shipment coming from Asia. That first shipment sold immediately and Cocktail Kingdom was born.

Why do you want to bring Cocktail Kingdom to Australia?

How did you become interested in old cocktail books and what sparked the drive to collect so many?

I purchased my first old cocktail book at a bookstore in London. The night before, Salvatore Calabrese had served me a few amazing cocktails at the Library Bar. It was inspiring. I knew that at the time (1998), when I returned home to New York City a proper cocktail would be near impossible to find, so I searched for books to further inspire me. My collection just passed 3,000 unique titles. Since the collection is a true working library, I try to collect every known cocktail book before 1970, so anybody using the library has a fairly complete experience.

Why do you think that the bar industry has so embraced the old pre-prohibition ways of doing things so wholeheartedly?

Bartending was a very respected profession in the mid-to-late 1800s. Unfortunately, it became something that people just did to make a little extra cash for the most part in the late 1900s. Today, bartending is returning to its former glory. Thus, bartenders are looking for better equipment, cocktail recipes and others things from the past that were almost forgotten.

What do you think of the high prices many of these old editions command on secondhand markets — have we gone a little crazy with the old books?

Old books can be overpriced, but more recently prices have moderated. There are still a few specific old books that will sell for a small fortune if they surface. Some people start battling it out on Ebay for mediocre books. It is sort of funny to watch. I do get many emails asking about the actual quality of certain books from collectors before making a purchase. It makes sense to do your research. There are many expensive books out there that are actually quite boring, and there are underpriced books that contain a world of valuable information.

What advice would you give to bartenders looking to start their own businesses?

Cocktail Kingdom is my seventh or eighth startup business. My best advice is to make sure that you can test your new business before diving in. You may be surprised that your business has bigger potential than you thought (and you have to be ready for that) or it may not be the award-winning idea you had thought.

What would you like to see more of in the booze world?

The booze world has been fun for me over the past few years. The focus on quality ingredients is amazing. Also, the people in the booze world are good at sharing knowledge. Honestly, there is not much I would change.

What are some of the stranger bar tools you’ve seen?

Just after WWII the factories needed something to do and they produced some of the most useless barware ever. One of my favorites is a mixing spoon where you press the top and the legs swirl to mix the drink. The only problem is that it does not work with ice cubes. They stop the legs from spinning.

What’s one piece of kit that every bartender ought to have?

Every bartender should have one set for stirring including a favourite mixing glass, barspoon and strainer. If I was forced to choose just one piece it would be the Hoffman barspoon since it is perfectly balanced. My favourite setup for stirring is the Extra Large Stemmed Mixing Glass with a Hoffman barspoon and one of our premium julep strainers. It is elegant without being too delicate.

What makes Japanese barware so special?

Japanese barware is often very high quality with great attention to detail. Cocktails have been very popular there for a long time and thus a solid barware industry has thrived. At Cocktail Kingdom, we take much of our inspiration from antique American barware. Much of the Japanese barware is actually based on old US Patents, often with a Japanese twist. So, we recreate the best barware from the past that until now had been forgotten.

Imagine it’s last call at the bar at the End of the World. What’s your last meal, and importantly, your last drink?

My last meal would definitely just be liquid based. More specifically, I would end with straight blanco tequila.
And done.

The NYT on the secret language of bartenders