Lift open the lid on most mainstream beers and what you’ll find is pretty good; but it is also pretty tame. You’ll get some combination of various proportions of malted barley, hops and water. And most will taste very much the same. But some brewers are doing things a little bit differently.

Crack open the tap to the Doctors Orders Cephalopod, and you’ll find a different mix of ingredients. The Sydney-based brewer Darren Robinson makes a wheat beer in the style of a Berliner Weisse beer, but to do so he also employs lactobacillus and brettanomyces yeast in the ferment, lending it a sour, refreshing edge.
The reason why the spectrum of mainstream beer flavour is pretty homogenous is in large part thanks to the limited palette of yeast that brewers use — and that’s no bad thing. Wild yeasts are unpredictable, and Saccharomyces cerevisiae (the traditional mainstream yeast) is less so — particularly when used in a sterile environment.

Brettanomyces is a funny thing. Most Australian winemakers in particular don’t like it all — the barnyard, blue cheese and Band Aid aromas it can contribute to a wine is often considered a wine fault, colloquially known as Brett taint. But taste is a subjective thing, and one man’s wine fault is another’s terroir. You’ll find a little Brett in some Bordeaux and Chateauneuf du Pape reds, and it’s also what makes Belgian style lambic beers so good. So what is it? It is a yeast, and strains such as Brettanomyces bruxellensis are native to the Senne valley in Belgium, the home of the world’s great sour beers.

At the Brewery Cantillon in Belgium, one of the world’s most renowned producers of sour beers, their beer can’t be made without the distinctive wild yeasts and bacteria native to the area. How does it happen? They take malted barley and wheat, add dry hops, and start the brewing process, cooking the ingredients to around 70 degrees Celsius with water (rather than boiling them) to produce the hot wort. This wort is then is put into a wide, shallow open tank called a coolship, beneath a vented ceiling. As the wort cools it is exposed to wild yeasts and lactobacillus present in the air. The microorganisms are said to be unique to the Senne and due to the historically large proportion of cherry trees in the area; it is thought that these yeasts now live in the walls and nooks of the brewery itself, in the heart of Brussels. The beer is then transferred to barrels to complete the fermentation, which can take years. 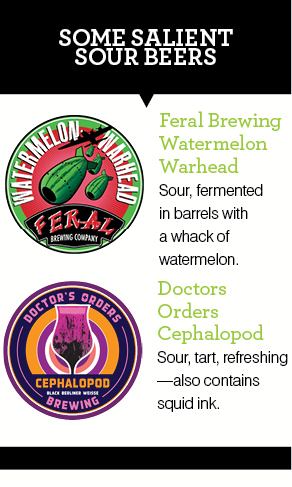 0
Australian Bartender August 16, 2013
No Comments Yet

Here’s 5 common wine faults and how to pick ’em

The return of real American beer