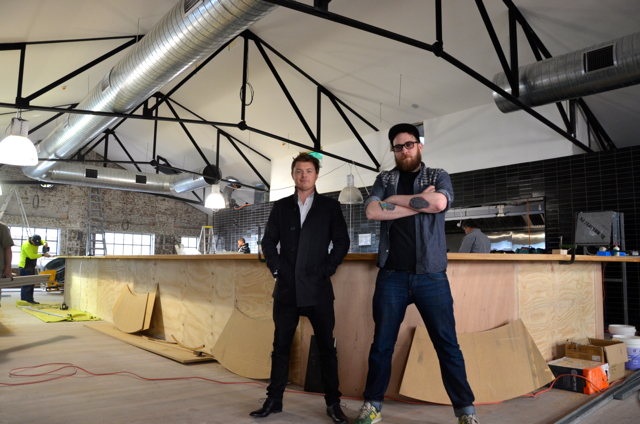 Late last year we brought you the news that the Parlour Group (whose venues  include The Stuffed Beaver and the Flying Squirrel) had bought a site in Woolloomooloo’s Riley Street that used to house Westfield boss Frank Lowy’s garage. The beautiful art deco building at 55 Riley Street will play home to the Parlour Group’s latest venture, Riley St Garage. We popped by to see how progress on the site was going, and to chat with group general manager Bay Kilpatrick and Riley Street Garage bar manager Bobby Carey (ex-Shady Pines Saloon).

Riley St Garage is first and foremost about eating, given it is a restaurant with a restaurant licence. Head chef Regan Porteous (ex-Toko) is “going for a modern Australian menu,” said Kilpatrick, with dishes like ceviche, oysters and share plates being canvassed. But the feel of the place will revolve around the majestic bar that is both the focal point, and a key part of the service the guys want to offer — think of the grand old bars of New York and the North American tradition of great restaurant bars where eating and drinking go together.

“Something that really intrigued me when I had a chat with the guys,” said Carey, “was their motto is I’d rather eat in a bar than drink in a restaurant.”

That being said, Carey is planning on a massive back stocked with whiskey and tequila, and a seasonally designed cocktail list made up of classics and classics with a twist.

“I’m going to try and focus a bit on Canadian and Irish [whiskey],” said Carey. “I’ve got some really good old 1940s bottles I’m looking at getting.”

“And I’m looking at getting some really tasty tequila on the back bar,” he said. “I’ve been doing a lot of research into Canadian whiskey, and there’s some good stuff out there,” said Carey.

There will be beer, of course, and some Guinness to go with the oysters being shucked at one end of the bar. “It’s going to be the best pint of Guinness,” said Carey, “outside of Durty Nellies!” (Durty Nellies being the Paddington Irish pub recently bought by Petersen’s brother and well known Sydney bar identity Leeroy Petersen). 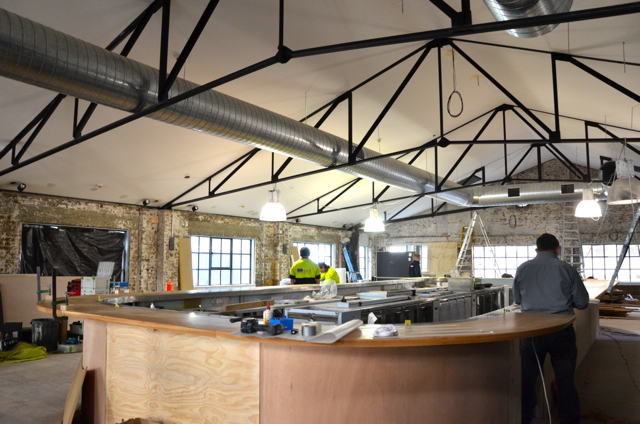 Carey came on board as bar manager for the lure of a new project and it being time for a change, he said, having been at Shady Pines for the alst four years.

“I’d left Shady’s,” said Carey, “and had a chat with the guys and they really enticed me to it,” he said. Carey liked the idea of getting in on the ground floor, “to be able to come in at the beginning, and to really sink my teeth in to something that I could be really proud of”.

“We were really looking for someone who could come in and we could hand ownership over to,” said Kilpatrick. “To make their mark on it, to have the same vision, to have the same passion for it that we do. But we wanted to give someone the freedom to do it. A lot of people are willing to stick their hand up, and say ‘yeah I want to have a bit of responsibility, yeah I want to have money and this and that’, but they don’t have the skill to do it. So we were just lucky to bump into Bobby when we did, and he had the whole package and we’re like, this is great, this all yours — go for it. Don’t fuck it up!”

The place is coming together, with the team expecting an October 1 opening date. You’ll be able to find them at 55 Riley Street, Woolloomooloo and they expect to trade Tuesday through Saturday. If you’re keen on the idea of this venue and want to get involved, get in touch with lads at jobs@parlourgroup.com.au.

0
Australian Bartender August 22, 2013
No Comments Yet

Aasha Sinha on the boys’ club and Ada Coleman

How to make your own grenadine

Ryes Rated! You might be surprised by the results…

Parlour group to park their new bar in Lowy’s spot