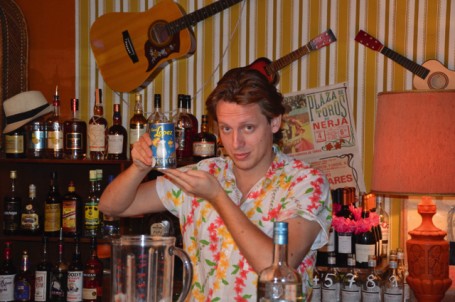 We wanted to lear more about spiced rum, so we asked the expert: Tom Bulmer of the Sydney Rum Club and all round rum nut.

I’ve heard that you can buy homemade spiced rum on the streets of Caribbean nations — is that right? Can you paint a picture of it for us?

The Caribbean while an exotic getaway for many travellers is still quite impoverished as nations. Much of the islands’ wealth is transported offshore to corporations such as that of oil and even rum profits. As such the local economy revolves around very few select things such as local foods, sugar refining, and tourism. The one thing that has a active contribution to all of these is rum! Set up in rum shacks around many of the islands are these local sellers of rums that are either mainly from small sugarcane farmers using up their molasses, excess un-aged rum stock from larger distilleries or even just stolen sugarcane that has been distilled.

Often these rums can be sold straight but are also spiced or flavoured partly because of the low quality rum distillate but to be honest its mostly because the spices and flavours on the Caribbean are delicious! If you ask anyone around the world if they would rather have their rum with coconut or without coconut I guarantee they will say with coconut. Such is the nature of rum and the tropical cocktails we all enjoy. In the Caribbean, cocktails are less likely due to the relative challenge and cost for the locals but spiced and flavoured rums are easy to buy from the shacks and easy to drink in the heat of the island sun.

Is this an age-old practice or something newer?

While spiced rum is a relatively new trend in the world it has gone on since the early days in the Caribbean. In much the same way as gin began its production it was quickly realised that alcohol was a preservative for spices, fruits, even humans such is the tale of the most famous ‘spiced’ rum of Nelson’s blood. Even rhum agricole has an age-old tradition of the family drinking grandma’s homemade flavoured rum before bed. I guess the only question is what is new? It’s just a little sad that many natural and age old practices in how to spice rum are not used in modern production. Many large commercial brands using artificial spicing instead and covering it up with the extensive addition of sugar. It’s often forgotten that a spiced rum should be a ‘cocktail’ of flavours and much like a old –fashioned it can be spoiled with too much sugar.

Would you say spiced rums are like a gateway for people getting into other kinds of rum?

I feel that we are seeing the same attributes to that of the Mojito and the noble Pina Colada where people are craving the taste of the drink without really considering the base spirit (even as done by in the marketing campaign of Bacardi in the 80s). In Australia this is great to see because of the tough robust stigma that rum has often had as opposed to the rest of the world that more often thinks of the Caribbean association and lighter flavours. This new trend will definitely engage a new generation of younger drinkers who want more approachable flavour throughout their rums. This is being seen in all spirits, such is the case with Hendricks. The only problem is when flavours begin to mask poor quality distillates. Rum already carries the flavour of tropical aging from the barrel, spices should be used to complement that base not take away from it. I think this is a trend that will continue in the category and bring more people into the sugar spirit of the tropics. But I think like with any spirit there will be good examples and poor examples. I hope venues continue to focus on the high quality of the category and don’t just stock the most obvious or cheapest options to put on the back bar. Choose the type of flavour you want on your bar because when a customer orders a spiced rum that is flavour that they have chosen not just a spirit.

0
Australian Bartender December 11, 2013
No Comments Yet