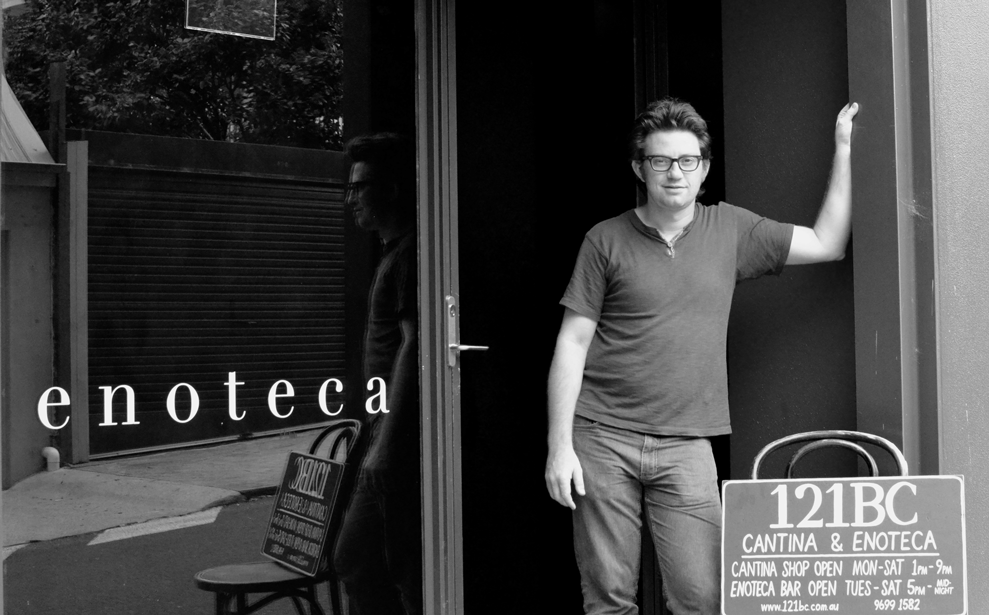 So you like your small-scale craft spirits and bespoke micro-brews, right? Well there’s a similar movement going on the wine world. On February 8 and 9 there will be a celebration of all things sustainable, bioydynamic and natural called Rootstock Sydney. Last year’s event was a great success (you can get your tickets to the wine festival, and all the food, wine and beer masterclasses here) so in the lead up to the second instalment of Rootstock Sydney we caught up with Giorgio de Maria,  owner of Sydney’s 121BC and one of people behind the event (along with Mike Bennie, James Hird, Linda Wiss and Matt Young), to talk natural wine, sustainability and Rootstock Sydney.

For a few reasons: because its an event that’s from Sydney because of the amazing people that are in Sydney. I don’t think it would be possible to do anywhere else, because the inspiration for this event is coming from Fratelli Paradiso, people like us, like [wine writer] Mike Bennie, James Hird from The Wine Library, Richard from Momofuku.

It’s because there’s this incredible community and the idea behind it is this cooperation between all these people — that’s the only reason why its possible to put together an event that is based exclusively on volunteering. Nobody gets paid.

What’s the idea behind Rootstock Sydney?

The idea behind everything was the fact the we believe it’s important to make a choice on what you eat and what you drink, and that means it’s really important to know where things are coming from and to be able to make you’re own choice whether you consume it or not. Because by choosing to consume one product you’re actually going to drive the market. If many, many people decide they want to drink that wine which is not really wine — because it’s basically grape fruit that’s been harvested, passed around, innoculated with all sorts of yeasts and manipulated —  I think people should be able to make a choice. If they still want to buy it and drink it, that’s no problem, but they need to know what’s behind it.

Obviously the whole event is about sustainability. I travel a lot, and I continuously see a lot of vineyards that, in a fragile landscape, are driving the soil to desertification. When you cultivate something very intensely, when you give it fertiliser, water, and herbicide, and systemic treatments against illness, first of all you’re killing all the life that is in the vineyard. What happens is there’s no more life in the soil, so it doesn’t regenerate. The consequence is that the soil is addicted: if you don’t give it water, if you don’t give it fertiliser, it’s not gonna be able to live on the natural cycles and give something spontaneously.

The second reason is, and a consequence of this is, I think that when a wine or produce is well-made and well-grown, it tastes more distinctive and it tastes, in my opinion, it tastes better. There’s a lot bad natural wine, and I’m not saying that natural wine is always good, but what I’m saying is all about the beauty of difference. So if you treat, if you give additives to the vineyard (which is quite common in big winemaking), you won’t be able to get that out of the wine. I don’t want to drink something that is not good for me. I want to taste something that tells me a story, that tells me something about where it’s coming from and the people who are behind it. For me that is extremely important.

What’s the deal with natural wine?

When I’m talking about natural wine I’m talking about minimal additions, as minimal manipulation as possible. Obviously that starts in the vineyard because a natural wine in my opinion can only be made in the vineyard, with extremely healthy fruit, because without these conditions you won’t be able to have a good fermentation going on.The winemaking won’t be as easy as possible if the grapes are not healthy, because everything you find in a wine comes from the grape, so the quality of the grape comes first.

Secondly, in the cellar, it’s about trying to leave it going and trying to intervene as little as possible. It’s difficult in terms of getting clean wines — I can show you a lot of natural wines that are extremely clean and distinctive, but as I said before there is a lot of natural wine that have quite a lot of faults. That comes from the fact that natural fermentation is always risky, because the fermentation is conducted by wild yeasts, so the main thing for me is if you do innoculate a selected yeast, like in conventional winemaking, it’s like your’e killing everything that’s in there and you give to the wine only one dimension — and the wine can be be fantastic — but to me it’s like a great solo. Once you leave the yeasts to work  by themselves, you have at least thirty families of yeasts, thousands of yeasts that are working together especially in the first day or two. And after one family, which is always different depending on what’s coming from the vineyard, what’s coming from the cellar, it is taking over and after when the wine reaches about six or seven per cent alcohol most of them they die, because they’re not alcohol tolerant. And saccharomyces, which is a particular type of family which generally you don’t find very much at the beginning, takes over the fermentation. But by doing that you allow all this difference to come through, so it’s not a solo any more — it’s an orchestra. The risky part of it is that if something goes wrong you can have bacteria, like acetic bacteria which makes high volatile acidity, you can incur this sort of risk.

What’s fascinating about natural winemakers is they have to interpret the vintage. So a good vintage or a bad vintage is not true anymore. It’s more about understanding what’s happening and reacting to what’s going on. Making quick decisions and adapting yourself to the natural cycle, not the other way round. So if the season is not particularly good you have to adapt yourself to what is going on, not the other way round. Again, the vineyard is essential. So from the moment in which you start to irrigate you’re not just touching that balance regarding the water supply, you’re actually touching a much more complex cycle. For example, if you start to irrigate, the roots of the vines will stop going down and come back to the surface, because that’s where the water is. And that means that these roots are not going to be able to absorb all these minerals in the soil which are generally at a deeper level.

Obviously there are areas in Australia where you need to irrigate, or they die, but the reason maybe is because a) the wrong variety is being planted there, and b) maybe some regions or areas you just cannot grow grapes.

Why should bartenders get to Rootstock Sydney?

I reckon it’s about the philosophy. Its about sustaining this sort of philosophy; for spirits its the same. You have some amazing small produced spirits — some whiskies, or some cognac that are distilled in a certain way rather than a commercial way. Another good example there is a lot of amazing gins or rhum agricole, or vermouth for example. There will be a producer at Rootstock Sydney with a vermouth, Gilles Lapalu who’s making Maidenii. So obviously this is more a way of thinking than just wine. For me the way we do it is, because we’re involved in wine, is through wine. but we already do a lot about food as well there’s a big  food part of it. Beer-wise we’re working with the guys at Young Henrys and Birra del Borgo from Italy are coming over. We’re looking towards this kind of product: we’re looking for elements of distinction and character, rather just playing safe and having a plain flavour.

It’s about following the quality and that sustainable cycle. People who looking after and thinking of the future — a vineyard needs to grow it’s fertility rather than lose it. [It’s about] making things with the consciousness of respecting where they’re from: adapting yourself to that location and to that tradition — and I’m not saying you have to make things the way they did 100 years ago. It’s always important to innovate, but you need to keep in mind very clearly the respect for place, and play around with what the tradition is.

0
Australian Bartender January 24, 2014
No Comments Yet

What is natural wine — anarchic, rule-breaking juice or wine the way it should be?

Here’s 5 common wine faults and how to pick ’em

What is terroir? Here’s what you need to know

Spätburgunder? Pinot nero? This is pinot 101