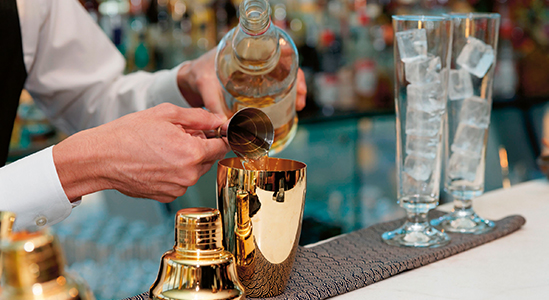 Stuart is a Sydney-based bartender; you’ll find him behind the stick at The Baxter Inn.

When I think back to my early days of bartending, I remember shifts spent collecting glasses or barbacking for the already established drink slingers. It was up to me to earn my stripes and show that I was worthy of a spot on the bar. This period was generally spent revising spec sheets for cocktails and sitting, watching in awe as the bartenders moved and shook the drinks, analysing every single movement that they made.

And it was the job of the established bartenders to mentor me. Whenever it was quiet they would bring me in and show me how to work the bar. They would talk about multiple orders and how to be efficient as a bartender. Things such as always working using both hands and acknowledging customers were drilled into me from this point and are the foundations for the way that I work today.

Most days I would carry a spec sheet around with me wherever I went, revising and trying to memorise the 20-something cocktails on the list. Once a week I would have to sit and complete a test, where the only thing listed on the piece of paper was the name of the drink. I then had to fill in the garnish, glass and ingredients, remembering quantities and method to boot. I still remember back to my first test, feeling almost as nervous as sitting my school exams, fearful of the thought of not making the grade. As much as this was a tough period of my bartending career, it was also a thoroughly enjoyable one, as every day I was learning something new, completely immersing myself in the hospitality scene.

I think that humans are most satisfied in their work when they are learning something. The desire to learn certainly took me as an 18 year old and made me fall in love with hospitality, sculpting me into a half decent bartender along the way.

During my time in Sydney, I have noticed a distinct lack of on the job training. I believe that the main reasons for this are the massive explosion of new venues of a good standard, caused by the small bar license, and the reluctance of decent bars to train their staff, instead opting for well established ‘celebrity bartenders’. Certainly, as a manager for the past few years, I noticed a distinct lack of good staff to man the bar. It seems that due to the increased number of establishments, there is now a dilution of good quality staff to man them. I’ve seen people going straight into roles in good venues, sticking their nose into a cocktail book for a few months and calling themselves good bartenders. What’s lacking however are the fundamentals of hospitality.

Good service, efficiency and speed are all traits of a good bartender that cannot be taught or read about in some book. They must be shown repeatedly, having someone pick you up each time its not done in order for these things to truly become automatic. Establishments and managers need to invest time in their bartenders, bringing them up through the ranks and really teaching them the tools needed to be a great bartender. Bartenders or barbacks need to sit it out in these establishments, resisting the temptation of jumping ship as soon as the next shiny new bar opens that is struggling to find staff. Ask any established and truly good bartender, not just in this city, but any city in the world, and they will tell you that they did their time as a barback. How some bartender, who they probably look up to even today, showed them the first steps of being a good bartender. Great structures must be built from the ground up.

Stuart Morrow wants to bring the team together