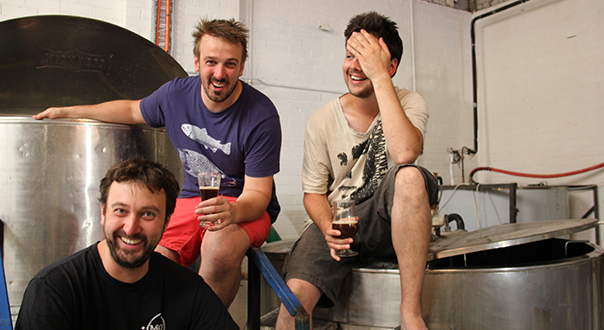 If everybody looked the same, we may very well get tired of looking at one another, as the song suggests. (We’d need to wear name tags all the time, too.) We’d find ways to differentiate ourselves, surely — it’s human nature.

And it follows that if every beer tasted the same — and you can argue that, for a while there before the craft beer boom, that was the way things were headed — you can be sure there’d be someone wanting to put something a little different  out in the market. But if that someone was the guys at Moon Dog Brewing, they might go a little overboard with their points of difference.

“We think that there’s no limit on what can go into a beer, as long as it tastes great,” said Moon Dog’s Josh Uljans.

“The way that you can combine the various malts, hops and yeasts to make beer is pretty much limitless in terms of the flavours that can be produced. Adding fruits, spices, barrels, wild yeasts and bacteria into the mix just makes it even more fun and exciting.”

Moon Dog is one of the brewers pushing the boundaries of beer, though they’re not the first ones to do it: in our chat with Samuel Adams founder and brewer Jim Koch last year, he talked about the Triple Bock he produced back in 1994 that took the record for the alcoholic strength in beer with a whopping 17.5 per cent ABV (that’s since been smashed apart by guys like the Scottish-based Brewmeister, who’s Snake Venom weighs in at 67.5 per cent ABV).

More often than not though, experimental beers are about interesting and unusual flavours.

“From the very beginning of Moon Dog, we set out to make beers that are unique and exciting. We’re always trying to come up with new ideas for beers, and it’s great to try different foods, or cocktails, to get new ideas for what we can brew.”

As with all experiments though, things can get a little out of hand (case in point: who needs a 67.5 per cent beer?).

“We’ve had a few batches that unfortunately just didn’t quite cut it, and so we decided not to release them,” said Uljans.

“Sometimes the flavours just don’t work together the way we hoped. Most of the time we do a trial batch first to make sure the idea hangs together, but a few times when it scaled up it just wasn’t right. Pretty heart-breaking to lose a batch of beer, but I guess it’s just a reality of trying to push the boundaries of beer.”

And who are these out-there beers aimed at? “There are heaps of people out there that love trying new beers,” said Uljans, “and we work really hard to make beers for them that they get a buzz out of drinking.” 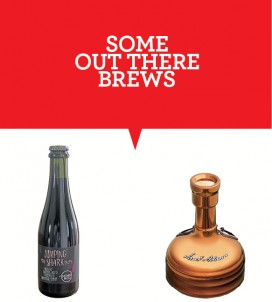 “Last year we made a 15.4% imperial stout, which was aged in Cognac barrels and then infused with 4.5kg of Tasmanian black truffles. That was pretty out there, and tasted sensational. The earthy flavours of the truffles worked really well with the chocolate from the stout, and the dark stewed fruits and oaky booze from the barrels. Very delicious stuff,” said Uljans.

The beers in Samuel Adams’ Utopias range — which is coming up to its 12th year — are annual release of beers that hit upwards of 20% ABV. A combination of munich, caramel and 2-row malts are brewed then aged in a variety of barrels, like ex-rum, sherry or bourbon barrels until they reach a point the brewers are happy with, some after 20 years if ageing in a barrel. They’re then blended and labelled with the year they’re released. CCA might be releasing some experimental brews from winter this year.