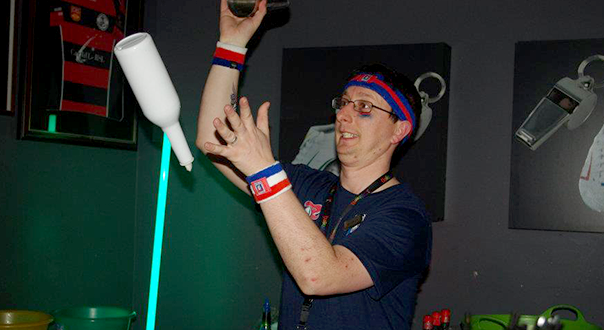 Stuart Morrow is a Sydney-based bartender and bar manager. You can catch him behind the bar at The Baxter Inn — if you’re really nice he may throw a bottle or two.

I have a secret to tell. It’s something that I’ve kept on the down-low ever since coming to Australia. I used to be a ‘flair bartender’! In fact, before gracing these fine shores, my primary source of income came from throwing bottles around for a living. You could even say that it paid for me to get here.

So why will you not find me tossing and flipping bottles behind the bar these days? Well, there are a few reasons.

Firstly, upon my arrival, it was evident that there was a distinct lack of venues where flair was done by anybody. It was obvious that knowledge was the thing that the bartender armed themselves with to impress the guest and looking fancy whilst making the drink was not important.

Secondly, both here and back in London, the perception within the industry seemed to be that if the bartender put their efforts into flair, then they surely couldn’t be well adept at making a good drink. With the clear seriousness and pride in making a great drink that Australia has, I certainly didn’t want to pigeon-hole myself as someone that didn’t know how to. So I put the bottle and shaker down, picked up a book and knuckled down and studied hard. Since then my knowledge and skills with drinks has improved times over.

But is there a place for flair behind the bar?

The definition of flair is ‘a special or aptitude ability for doing something well’ or ‘stylishness and originality’. Ok, so we all know that just because somebody does something with flair, it doesn’t necessarily make them good at making drinks, or even necessarily good at any aspect of bartending. However, if somebody does know how to make a cracking drink, knows the product, is quick and efficient, a great host and can do all that whilst looking good. Does doing that with flair not increase the theatre in making that drink and increase the perception to the guest of that bartenders ability?

We as bartenders are generally confident and enjoy showing off from time to time anyway. If we can impress a guest with our drinks and knowledge and the way that we do it, that will ultimately make us look better behind the bar and potentially bring in more tips. I personally like to sit at a bar where something is going on and the bartender is entertaining.

This being said, you will never find me behind a bar these days throwing a shaker and bottle around the place. I think the flair must be suitable for the place and situation. I hate walking into a quiet bar and seeing a bartender stood behind it and throwing things around. I’m sure that there are far more productive things that they could be doing. Nor do I like sitting and enjoying a drink with the sound of clattering shakers and bottles as the hit surfaces and floors. It doesn’t really set a nice, relaxing ambience.

Seeing a bartender doing a three minute routine whilst the bar is packed is equally as annoying. This kind of flair I think has a place in shows and event and shouldn’t really be used in the bar. Flair can be anything though, from the way you pick up a glass to the way you pour your drink or spirit. A little flick of the shaker or a nice long pour can look equally impressive when done well and takes no extra time to do.

At Hugo’s everything was passed along the bar to prevent crossing over as the bar was very narrow. We soon realised that a bottle thrown to the far end as opposed to being passed through three sets of hands was far more efficient. The call “fifty” was made and the bar team knew that the bottle would be thrown, not dissimilar to workers at the Pike Place Fish Markets in Seattle throwing their fish. Despite this relatively simple exhibition of flair, people were always impressed and would stop what they were doing whenever it was done. There would always be a comment about what happens if he drops it or that we had done it before. It obviously added in some way to the guest experience.

For some inspiration, check out the Nightjar training videos on YouTube.

Stuart Morrow wants to bring the team together

Editor’s note: this week it’s all about women

Hey, startender! Do your time as a barback