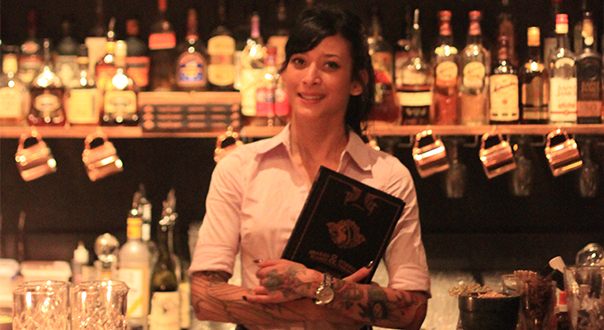 Welcome to our series of interviews with women in the bar industry. The condensed versions of these interviews can be found in the April issue of Australian Bartender. First up, meet Tasha Lu, Eau de Vie Melbourne’s head bartender.

The boys’ club will always be a boys’ club. The only way to stop being excluded, I find, is to just include yourself, prove yourself and study up. It hasn’t really affected me since I feel like one of the lads anyway.

Yes, women are represented well in Melbourne. I believe it is up to the individual’s motivation and ambition. I think if you want to be well represented, then take every opportunity to make it happen. Do everything you can to be noticed. For example: enter every competition you can, go to events, get involved in the hospitality scene, network and always be professional and ladylike.

I’ve been bar tending since I was 18. For two years in Perth and seven years in Melbourne, mostly nightclubs and cocktail bars. I’m so glad that I left my boring, well paid though unfulfilling office job to become a bartender. I was really shy when I was younger and working in this industry has made me more outgoing, confident and has let me be who I am. Not having to cover up tattoos and being able to express my personality, I don’t feel suppressed and stale like I did when I worked in an office. I am currently the Head Bartender at Eau De Vie Melbourne and I fucking love working there.

I think we’re at a stage now where its not necessary or relevant to separate the guys from the gals. We both have strengths and weaknesses that balance out when you work together as a team… with me in charge.

Not particularly. If anything women have the upper hand… boobs.

I think the industry has it covered.

That’s Splice from James Holtby & an ode to The Simpsons: Our final 2 videos in the 60 Second Cocktail Challenge!