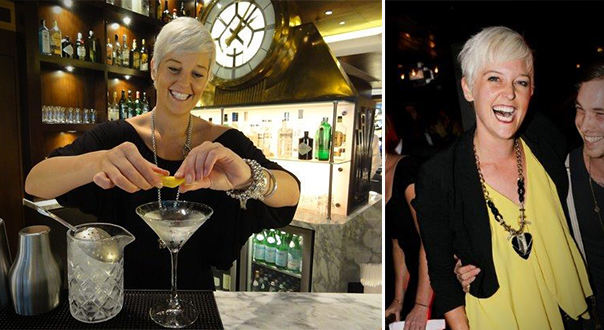 We’re continuing our series of interviews with women in the bar industry. Today, we speak to Suntory’s Hayley Morison about how she came to land her role and what to do about barriers in the industry.

Who are some of the women you’ve looked up to in the industry?

Luke Redington! For sure, and did you see that dress he had on during mardi gras? No seriously… There is one woman who stands out to me and that is Jess Arnott, her ability to deliver flawless presentations, her wealth of knowledge and her incredible talent in cocktail competitions, every time I watch her perform it gives me chills, all with no arrogance at all. I definitely envy her extreme aptitude that she provides to this industry.

But I’m inspired by all women who can hold their own among a team of men, who take charge, know their classics, are willing to take the added time to develop their skills, and really want to involve themselves in the magical world of bartending. Watching women behind a bar in action with impeccable skills not only moves me, but excites me, which influences me to keep building and growing further.

How did you get to be in the position you’re in?

Without doing the math, I’ve been in the industry over 11 years now.  I began bartending in a hotel bar in Sydney’s CBD learning the ropes as quickly as I could — finding a mentor and absorbing all the information I could from him. A couple of months later I was on a jet plane to the other side of the world, London. I started off in pub in Hammersmith pulling pints. Needing more mental stimulation I left and found a job as a waitress (as there was bar hierarchy) at a vodka bar in Soho  and was quickly promoted to assistant manager where I stayed for nearly two and a half years! With the visa clock expired I returned to Sydney then headed snow bound, then back to Sydney to manage 360 Bar and Dining, then Bavarian Bier Café, Café Sydney, a short stint at TheLoft then on to venue manager at Hugo’s Bar Pizza. I was lucky to conduct a few overseas consultancy gigs in Jakarta and Hong Kong and one landed me a full time role as the group bars manager responsible for 43 venues for Café Deco Group. So without delay I packed up and moved over to HK! Time went by, and after enough of the dumplings I returned to Sydney and landed the job with Suntory as Club Suntory manager and I’m loving it, wouldn’t change it for the world! We have a fraternity of bartenders with over 10,000 members that we connect with; lots of training, events, cocktail competitions and  Barfly magazine…. dream job?

I think we get lost a bit in focusing on the gents within the industry, only because it is a male dominate industry, and because to be honest we know the ratio is unbalanced it’s easy to report on all the activity as males are winning this, competing in that, opening this bar, being employed as that brand ambassador etc.  (and kudos to them! ) Understandably it’s the path that follows when there’s about nine males to one female, but having a best female bartenders list is fantastic in raising the profile of women in the industry as it’s focusing on that smaller ratio, as it gives them a chance to shine and places the focus on them for a moment.  I don’t think its patronising at all.

If you think there are barriers in place, you are only putting those barriers there yourself. It’s a male dominant industry — we know this, but we live in a country with equal rights. Women have a voice, we receive equal pay, it’s the 21st century, I believe the only barriers are not having belief in yourself,  or making excuses.

On the supplier side of things, do you think women are well represented?

Suntory (Club Suntory ) recognises and rewards and supports women through our communication channels whether that be Barfly profiles, interviews, cocktail shoots, or within our cocktail competitions. We had a large representation of women within our competitions last year. In the Suntory Cup we had four states out of the five with a female representing as finalists, one state even had two! Gin Mare, Chartreuse, [those comps] all had  female bartenders as finalists which is great to see, I’d love to see a lady take the title of Suntory Cup this year!  Other suppliers you ask?… When I was in the trade I felt personally I was at no disadvantage being a female. It’s all about yourself and how much you commit yourself to the industry  or support the supplier which will result in representation. If it’s evident you don’t love a brand, don’t expect them to show you any love. Study, commit, and get to know people within the industry, make the effort and hard work pays off!

Has being a woman ever got in the way of advancement in your career, or has it been an asset?

A bit of column A, and a bit of column B. I actually went for an interview once and was informed that it wasn’t really a woman’s role, and they hadn’t previously had a woman in that role either — I sat there thinking why are you wasting my time? Also, it was a challenge at times working in Asia training the bartenders as they looked at a woman, who was white , and gaining that respect was difficult, but on the other hand, I’d say it’s been a benefit more than an asset especially when travelling, getting a job as a female was much easier than for males.