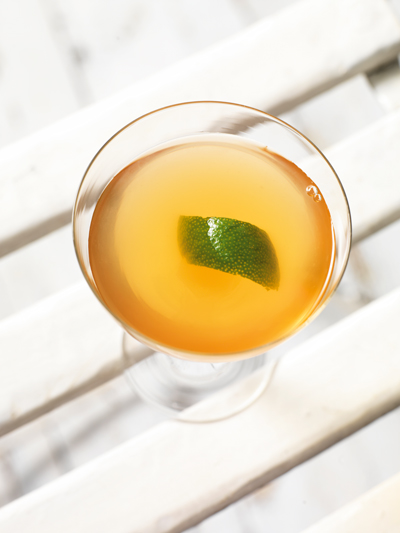 Stir all ingredients, double strain into a coupe.

The Gimlet has quite a literary history: appearing in Raymond Chandler’s novel, The Long Goodbye, the central character Phillip Marlowe is quite fond of them:

“He went away.  The woman in black gave me a quick glance, then looked down into her glass.  “So few people drink them around here,” she said so quietly that I didn’t realize at first that she was speaking to me.  Then she looked my way again.  She had very large dark eyes.  She had the reddest fingernails I have ever seen.  But she didn’t look like a pickup and there was no trace of come-on in her voice.  “Gimlets I mean.”

“A fellow taught me to like them,”
I said.

“He must be English.”

“The lime juice.  It’s as English as boiled fish with that awful anchovy sauce that looks as if the cook had bled into it.  That’s how they got called limeys.  The English – not the fish.”

“I thought it was more a tropical drink, hot weather stuff.  Malaya or some place like that.”

“You may be right.”  She turned away again.

The bartender set the drink in front of me.  With the lime juice it has sort of a pale greenish yellowish misty look.  I tasted it.  It was both sweet and sharp at the same time.  The woman in black watched me.  Then she lifted her own glass towards me.  We both drank.  Then I knew hers was the same drink.”

You don’t get any more simple than this drink. Though Chandler’s description suggests half and half of gin and lime cordial — Rose’s Sweetened Lime Juice, no less — today we’d recommend you cut down on that sweetness a bit.

A gimlet is a kind of piercing drill,according to the intergoogles — so you should expect that your Gimlet be piercing in its flavour as well.

There’s evidence that cordials in general go back to the time, like so much in bibulous history, to that great bastion of booze: The Royal Navy. Apparently, cordials were made with a rum base as a way to get the sailors their daily does of limen as a means of warding off scurvy.

We hear from Cameron Parish, Gimlet Bar Manager on perfecting the Gimlet, opening in a pandemic and why young bartenders should enjoy their time behind the stick