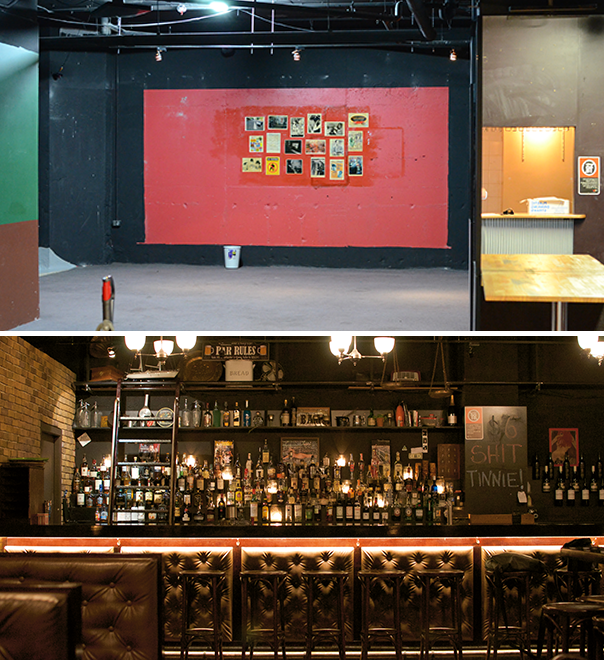 It’s a funny thing to see a bar come to life. You walk in, and whatever life the space had lived before — be it a bar, a garage, an office — is well and truly gone. The previous occupants have moved on, shut down, and cleared out. Then the new team comes in, with all their hopes for the place, and they see it differently. They tear down the old and make something new for themselves.

The guys behind Sydney’s Ramblin’ Rascal Tavern — Dardan Shervashidze, Charlie Lehmann and Sebastian Soto — invited Australian Bartender to watch how their new space evolved early this year, so that other would-be bar owners might get an idea of what lays ahead. 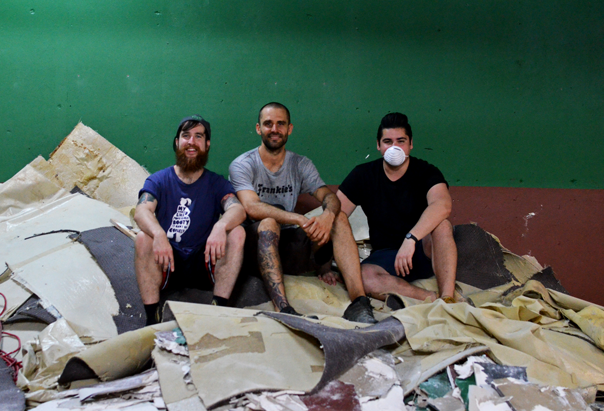 In late January we stopped by the space, on the corner of Park and Elizabeth Streets in Sydney’s CBD to find a lot of work to be done on a space that hadn’t quite worked for the previous owners.

That history of the site — their liquor licence is more than a hundred years old —  informed part of the name the boys adopted for their bar.

“Rascal is kind of like an inside joke at Swillhouse,” said Soto. “We wanted to use a little alliteration and we’re drunk all the time, so that’s how you get Ramblin’, and Tavern because we want to throw back to what it used to be called, and also that working class theme.

“It’s a drinking den, a no frills kind of thing. A place you can unwind after a hard day and unwind, that’s the inspiration.”

The lads first had a walk through the site in July 2013; it wasn’t until October and November that they got a call back to sign the lease. Not that finalising the lease proved easy.

“There were a few clauses in the contract we weren’t really happy with,” Soto said.

“So we got lawyers, we needed a good lawyer,” he said. “It’s funny because the lawyer said to us that it’s good that we came to him and got this out of the way because we won’t have to talk to him for another ten years or until our lease is finished.”

Now that the lease was finalised, they could get to work on the demolition of the old venue.

“We’re getting rid of the bar, turning it into a wall,” said Soto. They wanted to move the bar to the other end of the venue put in a wall to straighten up the symmetry of the room, a tip they got from Swillhouse owner, Jason Scott. 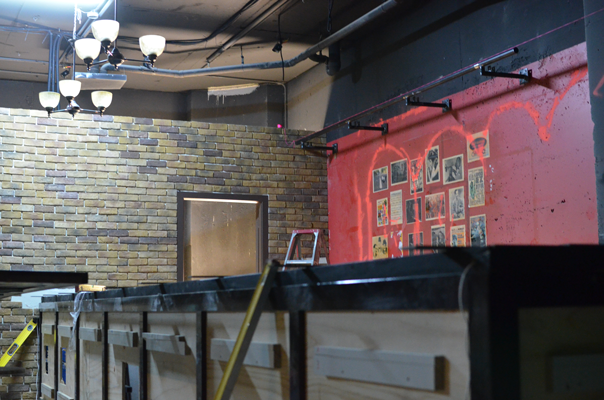 When we descend the stairs again a couple of weeks later, a lot of the demo work had been done, with the result being a large pile of crap in one corner of the room. “That big heap of rubbish, we’re paying someone to take that out,” said Soto.

They’d spent a couple of days knocking down walls and ripping up carpet, and were getting ready to dig a trench in the concrete so they could lay the plumbing work for the new bar. Soto said he expected that to take a few days.

At this point, Soto seems pretty calm about the impending opening.

“It’s still early stages,” he said, “the money thing is kind of stressful, we’ve just got to work some of that out, but it’s gotta be done.”

There’d been no surprises yet though — perhaps because things were moving so fast, as Shervashidze suggested.

“This particular situation, because it was thrown at us, we’ve been scraping in, just getting things in on time, because it happened so quick. Usually for this kind of thing you have a year, you plan ahead, then you go out. We found the site and then did everything afterwards. It’s been hard, it’s pretty stressfull managing 60 hours at Frankie’s and then organising other shit.”

Most of Shervashidze’s time so far had been spent on the phone to lawyers, accountants and real estate agents, he said. They had some early help from their bosses at Swillhouse, though, to point them in the right direction.

“Anton and Jason put us onto the lawyer,” said Lehmann. “He read the contracts all for us, explained it to us and was like ‘you’re going to get fucked on this, this and this.’”

Lehmann for his part was looking into the aesthetics of the bar.

“I think we’re products of our environment, so working at Swillhouse, that’s like home for us,” he said. He was busy acquiring “picture frames, we’re going to cover the walls with heaps of stuff. The panelling’s going to be really dark, the bar’s going to be dark, we’re going to have studded leather on the outside of the bar — that’s the sort of the feel we’re going for with the bar.

“My garage is filling up with heaps of shit. At this stage it’s just about sourcing all the photos that you want, frames that you want, the lighting that you need — everything like that.

“Getting products in will come later on. We know what we like.

“Music-wise it’s going to be funk, soul, rock ‘n’ roll. What Swillhouse has done for themselves is just something that they like, something fun, something that people can just come to and have a good time.” 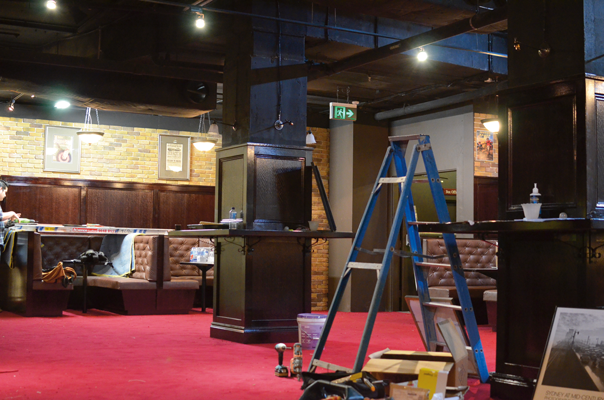 Around the three week mark — in mid-March — Soto is expecting the bar to be ready by the end of the month, and they’re beginning to finalise the booze they’re selling.

“Next step is getting the carpet in. A lot of the back of house stuff as well — getting some stock and that sort of stuff. We’ve been so focused on getting it built, now we need to focus on getting everything in.

“Our back bar is going to have a heavy, darker spirits focus. More of a focus on rums, whiskies and even some cognacs as well — we want to try and get brandy back in. We enjoy brandy. We’re going to have a totally Australian wine and beer list,” he said.

The trio is going strong at this point — and that’s going to be crucial as they’ll be pulling a lot of hours themselves when the doors open.

“So far we haven’t had any issues,” Soto said. “I think it’s going to be ok. We’ve all got the same vision and mentality and are just hoping to get this done as soon as we can.

“We owe quite a bit of money for stuff so we’re going to try and keep it a bit of a skeleton crew to begin with and see how we go.”

We meet again in late March, and Soto is hopeful they’ll be open in a week.

“We’re waiting for red tape that should have been done weeks ago,” he said. “Things like getting the insurance done, you have to wait for the certifier to tick off certain things which he just hasn’t got around to so, [we’re] harassing the certifier so we can get the insurance so we can open. [The point of sale system] is taking a while as well. Usually they need a bit of time in advance and we didn’t give them much time.

“We’ve got to fix the back bar, but it doesn’t need too much, just little things here and there. Make sure everything works and is up and running and getting some booze in here. Tables are coming today.” 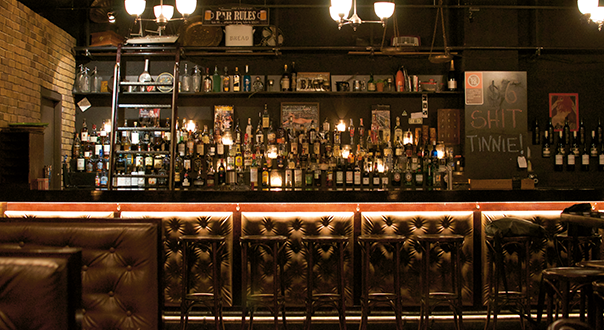 The punters roll in

The Ramblin’ Rascal Tavern threw open its doors to the boozy, drink loving embrace of the public at the start of April, more or less on schedule. And they had a shiny new logo to show off too. We caught up with them after the first three weeks.

They’ve nailed down the drink offering, though they didn’t have a concrete plan to begin with.

“There was a lot of winging it,” said Soto. “It’s worked out though, we’ve got enough experience to do it.”

“The cocktail list pokes a lot of fun at the whole mixology thing,” said Lehmann, “but it’s just an approachable kind of list. We also have some really good premium beers — we just wanted to cover all bases. People ask us what kind of bar we are. Well, we’re an everyman’s bar, we do everything. We do good cocktails, we do good wine, we do good beer — we do shit beer. And lots of shots of cognac.”

“We just like cognac and no one’s doing shots of cognac,” said Soto. “It’s got a stigma that it’s only for rich people and old white guys.”

The boys are happy with where things are at right now.

“For our first three weeks we’ve been doing pretty well,” said Soto. “As long as we do our day to day thing, and keep delivering on that, the rest of the city will find out about us. For now it’s just those in the know, those that love blogs, and bartenders and hospo.”

And it helps if you’re prepared to do the hard yards yourself.

“It helps that all three of us are behind the bar and working,” said Lehmann, “so that our staff overheads are really nothing. With other bars it might be harder to do that.”

Top tips for opening a bar

1. Before you go looking for a venue, know you want to do this “You’ve got to work out if this is what you want to do for the rest of your life, because we have a ten year lease. So find people you can stand — if you’re going to be stuck in a bar with other people for ten years make sure that if the world was ending, you could drink with these dudes. If you’re going it alone, I wouldn’t know what advice to give because that would be tough job to do,” said Lehmann.

2. Then, you need to find a venue
“The first thing we were told when went to Swillhouse was the first thing to do is find a venue, before anything else,” said Soto. Find the venue first, then work on your concept.