Whisky can be a tricky business to wrap your head around. With so much going on in each dram, we went straight to the folks that know the most: distillers, master blenders, malt masters, global ambassadors. They spoke to us about phenols, their stills, and the trend towards non-age statement whisky. Check out the Q&A below. 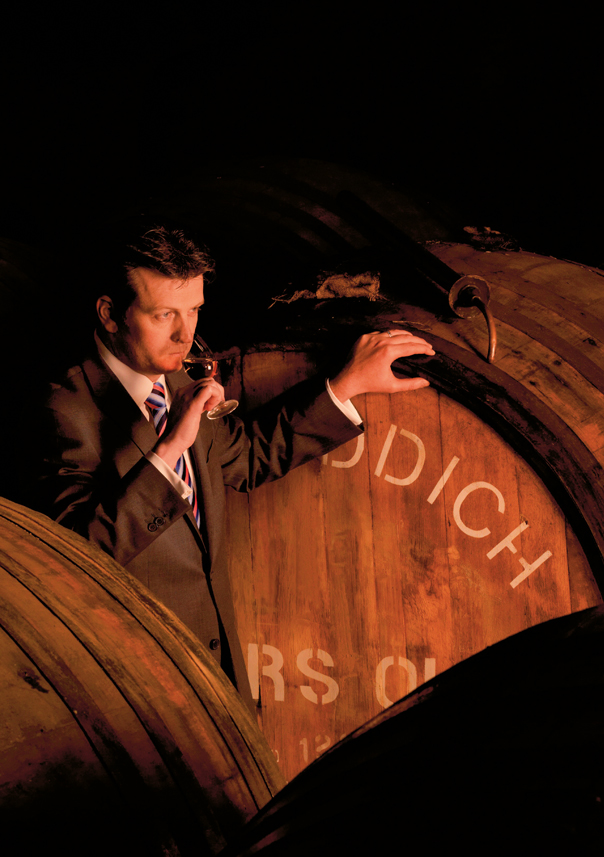 Length of time in role: 5 years

How did you come to be in this role?

I started in the laboratory based at William Grant & Sons grain distillery in Girvan working as a chemist.  My main role was analysis of new spirit from the distilleries as well as maturation studies.  As part of this I worked with the previous master blender, David Stewart, and eventually became his assistant and trainee for around eight years before taking over as the company master blender and malt master for Glenfiddich.

Can you briefly describe the production process and distillery setup?

Glenfiddich is a single malt scotch whisky so the process is very traditional with only three raw materials – malted barley, water and yeast.  We double distill at Glenfiddich using traditional copper pot stills to exactly the same shape and size as the originals
installed by the founder, William Grant, back in 1887.

What base materials do you use for your whisky, and how do they each contribute to the
final flavour?

As I said we only use three raw materials and the process is very traditional.  Much of the flavour is developed during the fermentation stage where we develop the characteristic Glenfiddich fruity, fresh pear notes.  We then run our stills very slowly and take a relatively small spirit cut to ensure a fruity spirit character.

The next step is maturation and we are very focussed on filling Glenfiddich into a specific mix of American and European oak to ensure the correct flavour profile in years to come.  We have our own team of coopers at the distillery tending the casks as we recognise the importance of maintaining the wood quality.

Can you tell us what you think about the trend towards whiskies that carry no age statement?

I think so long as the whisky tastes good then the age is not important.  In many ways products without age statements allow for real innovation and experimentation with flavour.  By vatting together some old whisky and young whisky it is possible to create an interesting balance of vibrancy
and depth.

What do you think are the hallmarks of great whisky?

It needs to taste great. 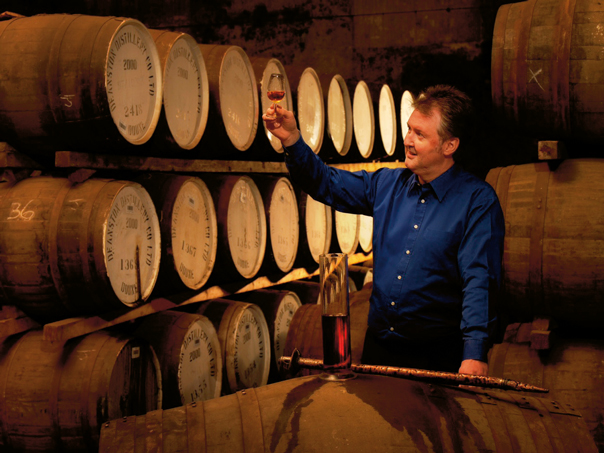 How did you come to be in this role?

After many years in the industry, I was encouraged to develop my skills further in the blending side of the business. My mentor, having acknowledged my acute organoleptic abilities, introduced me to the world of whisky blending.

I believe in producing single malt whisky manually at each of our three distilleries. We use only the finest quality Malted Barley where the natural starch is converted into a fermentable sugar in the mashing process, which is converted into alcohol with the addition of specially cultured yeasts during the fermentation process. After fermentation, we have a liquid known as wash. This is then distilled twice in pot stills to produce a final product. We only select a small proportion of the second distillation as acceptable quality for the new whisky.

What base materials do you use for your whisky, and how do they each contribute to the final flavour?

We have very strict laws that govern the production of Scotch Whisky in that we are only permitted to use three ingredients: malted barley, water and yeast. The use of any artificial enzymes is totally forbidden. The natural enzymes in the malted barley, the unique water source, the location of each distillery, the mash size and the shape of the pot stills all contribute to ensure a unique product at every distillery. The most important element in the development of the final whisky quality is the careful selection of top quality casks for the maturation process. We use a selection of ex American Bourbon barrels, various styles of ex Spanish Sherry casks and other casks that have previously been used to mature Scotch Whisky.

Can you tell us what you think about the trend towards whiskies that carry no age statement?

The release of single malts without an age statement allows the skills of the Master Blender to really shine through. A non age statement Single Malt allows us to blend the wonderful qualities of an older aged single malt plus the contribution that we know younger whiskies can add to the final product.

What do you think are the hallmarks of great whisky?

Every Single Malt and Blended Whisky is a unique product. However a truly great whisky will always be the choice of the consumer. 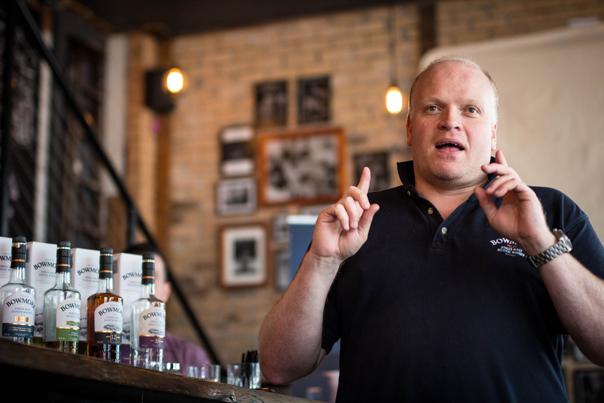 Length of time in role: 3 years

Could you briefly describe the production process?

The first key aspect is turning the barley into malt. There are commercial people that do that for you, called maltsters, and you get a delivery of malt and you grind it down, then start the process. We still do this ourselves at Bowmore — not 100%, we still need to get a delivery of malt — but we make our Bowmore malt. It’s the same spec, but we steep that barley in local water, which raises the moisture level up very high, which tricks it into growing. We lay it out on the malt floors, which are the size of four squash courts, and it’s about 15 to 20 centimeters deep on that floor. And it starts to grow over a five to seven day process and you can see the germination happening – it depends on the temperature outside but its generally pretty cold. We turn it very regularly, because if we left it, it would get very hot on the floor and germinate and germinate quicker because it generates heat, but be colder on the top, so you’d get a sort of matting together on the floor and not on the top — you need to ensure even germination. We do that every four hours. The maltmen will be inspecting the malt, and know when we need to move it into the kiln. Then we pour into these buckets, take it up to the kiln, and smoke it with peat that we cut on Islay for about 15 hours.

That’s what gives Bowmore its smoke that you then pick up in the whisky, which is about 25—30 parts per million of phenol. We then have to dry it for 45 hours to get the moisture level right back down, so we can then grind it down.

We then grind it down and create a grist, which is the broken down husks and the internals, and the next stage of the process is mashing.

We add the hot water to it, starting at 63.5 degrees centigrade, into the mix, the porridge-like mix, and that’s what we then collect, called a wort. It’s salty, smoky, sweet. Then in fermentation we add yeast to that, we create a beer after 48 hours then distill it twice in our uniquely shape stills. A lot of the flavours are created in the unique shape of the stills and in the condensers and all the little idiosyncrasies of the individual distilleries make these a little bit different.

Can you describe the stills?

We’ve got four — two sets of two. Two wash stills which are 30,900L. So we produce 40,000 litres of wort and split it between the two at that point, then the charge into the second still, including the foreshots and feints is about 23 per cent into that second still, which means the cut for the new make is between 74 and 61. Anything above 74% comes back and gets redistilled, anything below 61% comes back and gets redistilled with the low wines. 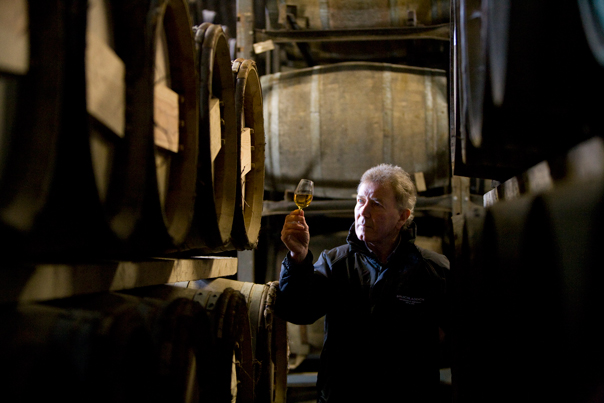 Length of time in role: Over 50 years in the industry

How did you get the job?

When you are born on a whisky island, it’s every kid’s dream to work in a distillery and I was no different, so 52 years ago I started work at Bowmore distillery as a apprentice cooper and worked my way through all aspects of the production process. I’m still getting the buzz every day I walk into the distillery.

Can you briefly describe the production process?

Making single malt whisky is a fairly simple process. You grow barley, then germinate it over a seven day period; next you dry it over peat fires or with warm air, and after drying it’s now called malt. The malt is now stored for 12-16 weeks it’s milled into what looks like a breakfast cereal: this is called grist. It is mixed with hot water in a large vessel known as a mash tun. The hot water dissolves the natural sugars in the grist; this is drained from the mash tun, cooled down and transferred into fermentation tanks where yeast is added and we make a sweet beer called wash which is seven percent ABV. Next the wash is transferred into large copper pot stills where it is boiled twice. At the end of that you have a clear liquid at 68 percent alcohol. This is then filled into the oak casks and left to mature for a minimum of three years, at which time it is officially whisky.

What you think about no age statement whiskies?

No age statements means younger whisky -— between five and seven years old. The reason there is more non-age single malts becoming available is simple: the stocks of older malts have decreased substantially due to demand over the last three decades, plus the volume of blended whisky being sold has also increased dramatically. As most blended whiskies are about five years old, the stocks being held for older single malts are under pressure.

The industry has responded in a positive manner with production being increased over the last decade, so it will take some years before you find 25 and 30 years old whisky in your local store. If you can find it, buy it.

0
Australian Bartender August 25, 2014
No Comments Yet