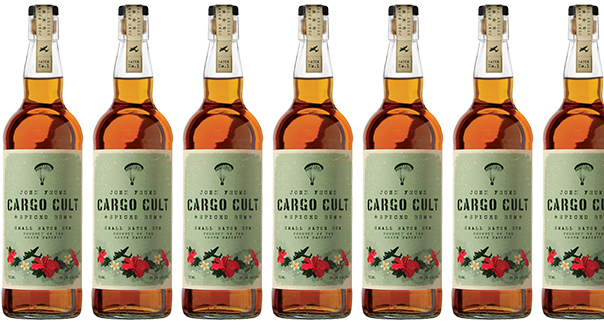 There’s a new spiced rum hitting the Australian market, and it hails from the South Pacific.

Cargo Cult Spiced Rum is made from the “rich volcanic soils, unpolluted rainwater and sun-drenched sugarcane from the Ramu River Valley [in Papua New Guinea] and Fiji.”

The rum is the brainchild of Jonny Croft, who left his role as the Asia Pacific regional marketing director for Brown Forman last year. Croft said he got the idea for the brand following a conversation with his dad, who had been a doctor at a naval base in Papua New Guinea during the 1960’s.

“He told me that when the US arrived during the second world war, they brought endless amounts of supplies, a lot of which they gave away to the islanders. After the US departed, the islanders formed a quasi-religion called Cargo Cults, worshipping a man they called John Frum [as in, “John from America”] hoping he would come back with more free supplies.”

Croft then embarked on a journey to Papua New Guinea to find his rum.

“I wanted something different,” he said. “I had never heard of PNG rum before so it sounded interesting. A few days on Google, many emails and phone calls later I had an invite. Several planes, armed security pick ups, 4WD river crossings after that, I was at the distillery… and the rum was amazing.”

John Frum’s Cargo Cult Spiced Rum is available in limited quantities with a focus on small bars and independent retailers, and is distributed by Neat Spirits Australia (dan@neatspirits.com.au or 0410 231 534). For more information contact Jonny Croft on 0409 144 446 or at jonny@smallbatchspirits.com.au or head to www.cargocultrum.com

0
Australian Bartender November 21, 2014
No Comments Yet

Never Never Distilling Co jumps on board with Proof & Company