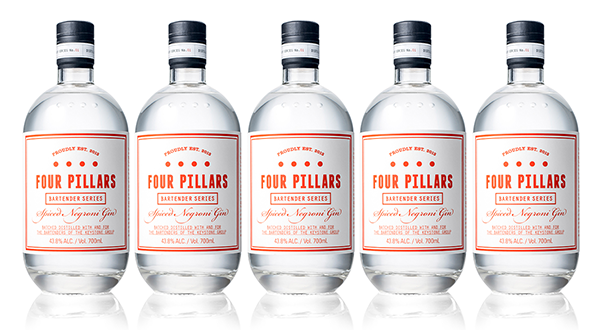 The bartenders of The Keystone Group have it pretty good: they work in some of Sydney’s — if not Australia’s — more innovative venues, and now they can say they’ve made their own gin.

We spoke to Keystone’s group bars manager, Jason Williams, about their collaboration with the guys behind Four Pillars Gin, and how they went about crafting a gin that is tailor-made for Negronis.

Bartender Magazine: What makes it different to the other Four Pillars gins?

Jason Williams: This gin was created specifically with the Negroni in mind — although that was more the inspiration as opposed to its only use. We love the Four Pillars range and what they are doing in general, so it wasn’t just about making another gin. There had to be a reason and a story of sorts.

The Negroni is a hugely popular cocktail with bartenders and it’s a drink we are going to start championing more with our guests, so it made sense to take its flavour profile and build upon it. Four Pillars Rare Dry Gin does have a lot of spice going on, plus orange, so it was about Cam (Cameron MacKenzie, Four Pillars’ distiller) and us thinking about intensifying those characteristics, so you could really smell and taste the gin through the big flavours of the Negroni.

Botanical-wise we have upped the ante on the spices. We doubled the amount of cinnamon, increased the lavender and star anise and added grains of paradise, ginger, dried bush tomato and also local (NSW) fresh blood orange. Most of the botanicals are added to the neutral grain spirit while the fresh fruit and ginger are added to a basket that the distillate vapour passes through.

How long did it take to come up with the right recipe?

We are the first to admit we didn’t put in the leg work in when it comes to the recipe! Cameron MacKenzie has created a cracking product after years of trialls and experimenting. We simply thought about what we wanted and worked from their existing flavour profile. We exchanged ideas with Stuart Gregor and Cameron and then Cam put it in to practice. We wanted a spicy, lifted gin, and he suggested the grains of paradise which are awesome. We exchanged emails and ideas for probabaly four months and we went down to the distillery twice. The second time Cristiano Beretta and I actually made calls on the spices.

How is it being used throughout the group?

This is now our standard Negroni gin but it’s also great in a gin and soda, gin and tonic with a slice of orange and the teams are already playing around with some house cocktails. The Winery have a spiced apricot white lady number coming on, Manly Wine are doing a bespoke tonic syrup to match in a G&T and The Rook of course has it in a watercooler of negroni — basically a glass dispenser full of Negroni. There will be plenty of other great creations to come out of this project.

The month of January sees The Rook, The Winery, Gazebo and Manly Wine serving up a Spiced Negroni and a snack for aperitivo for $18 from 4pm-7pm.

0
Australian Bartender December 2, 2014
No Comments Yet