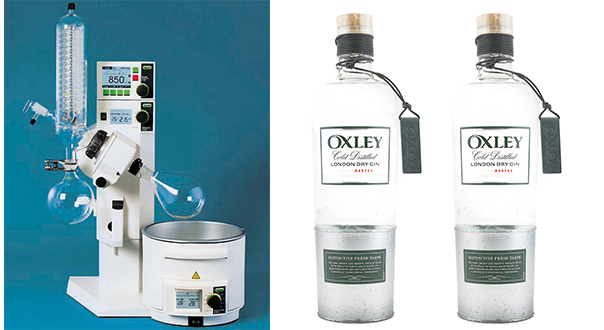 Hang on, huh? Rotary evaporators may not have been something that Jerry Thomas used in his day, and costing upwards of $10,000 they represent the pointy end of expensive bartending kit. It is fair to say that you don’t really need one behind your bar.

But if you had one laying about, the possibilities the tech opens up in terms of flavour are huge.

Akiba’s Lee Potter Cavanagh has been mucking around with one of late, and has used it to get the delicate flavours and aromatics of botanicals like shiso leaf into alcohol. We asked him a few questions to wrap our heads around what a rotary evaporator — commonly referred to as a rotovap, a shortening of the Buchi brand’s name for their evaporator, called the Rotovapor — can do, an overview of how it works (we won’t get into the details — that’s for the truly geeky), and what he’s done with it.

What is it used for?
“The kitchen use it to concentrate flavours,” said Potter Cavanagh. “For instance, they’ve got pickled strawberries on the tart, but the pickle brine that they would normally throw away in a restaurant, they keep it and concentrate it. The vinegar carries over, as does the water, so you’re left with a much more concentrated, sweet, strawberry flavour, which is super syrupy and concentrated, but it’s not cooked so it’s a fresh strawberry flavour, because it’s all happening at 30 degrees.”

Simply put, a rotary evaporator extracts delicate aroma compounds without the higher heat of traditional distillation. You can use it with alcohol as the liquid, or just with water.

“It works best with alcohol,” he said. “When you’re taking flavours over with water, water only carries the aroma and it dissipates quite quickly, whereas alcohol is a great vessel for flavour. It sucks it up really quickly.

“A great analogy for that is alcohol versus hot water for brewing tea: alcohol still sucks the flavour out of a tea leaf, at the same speed at room temperature as boiling water does. It’s that much better at sucking up flavour.”

So how does it work?
“We [tend to] think that evaporation is that water boils at 100 degrees Celsius, right,” said Potter Cavanagh. “It’s not that simple. It boils at 100 degrees at sea level. As you go up, that goes down. The lower the pressure you’re at, the easier things evaporate.Because this is distilling under vacuum — that is, at a lower pressure — you can extract aromas and flavours at a lower temperature.

“Because it’s only at 30 degrees Celsius it’s not cooking what’s inside that. It’s essentially like sous vide, but you can evaporate stuff as well. It’s a great way to distill.”

There’s three components to the rotovap: one, you have the temperature controlled water bath. Two, there is the rotating flask that sits in the water bath. This flask contatins the mixture you’re distilling — in the case of Akiba’s shiso distillate, it’s the alcohol and the shiso leaf. Third is the vacuum pump, which allows you to reduce the pressure inside the system so that the boiling point of the liquid in the flask is reduced. This allows the gases to escape the liquid. Fourth you have the condenser — this chills the gases, recondensing the them into a liquid. Fifth, you’ve got the receiving flask, which is where the recondensed liquid is collected.

The reduced boiling point means you can capture more delicate aromas.
“It really lends itself to fresh flavours,” said Potter Cavanagh. “All the flavours you generally associate with pefume, or essential oils, it works really well for that kind of stuff, anything that’s really aromatic.

“We did some lemon ice; we distilled lemon juice, and the water that came over still had the aromatic compounds of the lemon, the oils — but it was completely water. The oils stayed back, and the aroma of the oils came over but it’s just water that smelt like lemon peel. Then we froze it, and the aroma still comes off the ice really easily. It just looks like normal ice, but it’s really lemon scented.

The point of it is to enhance flavour though, not as a sales gimmick. “It’s all about getting awesome flavour for the glass,” said Potter Cavanagh, “we don’t want it to be selling the drink as this is the rotovap drink. You can go all sorts of crazy with it.

“There’s a couple of bars in the UK that do it really well. The Talented Mr Fox and Peg & Patriot, they’re fucking awesome. It’s a bit geeky, but they do it in a really fun way. The drink I talk about is based on these crisps in the UK called Monster Munch, which are pickled onion flavoured. They distilled that, made a distillate, and made a Gibson out of it. It’s served with a shrunk packet on the side of the glass and I just thought that was so fucking cool. It’s something that everybody can relate to because you may not know what a Gibson is, but you sure as hell know what pickled onion Monster Munch chips are. It’s a way of selling that drink and teaching people about a Gibson in a way that’s awesome and so much fun.

“If we get too historical on people everyone’s going to switch off, that’s not what drinks are about. We’re not here for a history lesson — Jerry Thomas was out to have a good time. He knew about setting shit on fire to sell drinks! And I can tell you one thing, I’m sure the Blue Blazer wasn’t cheap.”

There is a steep learning curve to master.
“I hadn’t used it much in the UK,” he said, “but went to a couple of mates bars where they were using it. I stood around and watched, basically, and they let me touch it every now and then. It’s one of those things which has been a steep learning curve but it’s fun and interesting and if you set your mind to out you’ll work it out.

There’s a couple of cold distilled gins on the market in the UK — that is, they are distilled under vacuum at cold temperatures. It’s mind-boggling stuff, sure.

Oxley Cold Distilled London Dry Gin is one of them. They macerate 14 botanicals in spirit , then add it to the kettle which is under vacuum and at minus five degrees Celsius. This causes it to “boil” and evaporate. The liquid is then passed along at cold finger condenser which is at -100 degrees Celsius, and the vapour changes back into a liquid for bottling — with all the freshness of the botanicals intact.