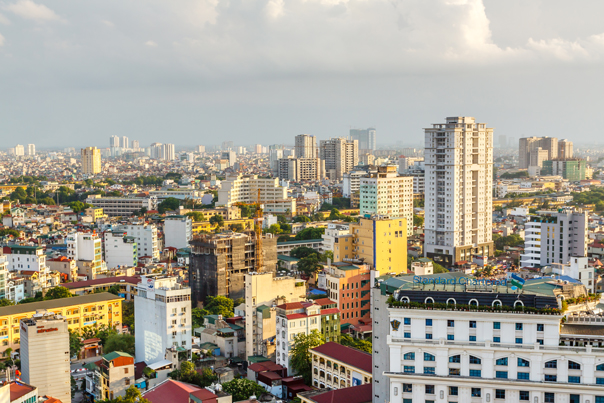 “What is the purpose of your visit to Vietnam?” The customs guard asked me, looking at my dishevelled clothes suspiciously. What the hell was I doing here?

I’d spent the last night in Singapore propping up the bar in 28HKS, and it had definitely taken it’s toll on my mental capacity, and the flight to Hanoi had been so full of energetic children I had been forced to administer a few strong gins, for medicinal purposes of course. Unofficially I was there to attend an unlicensed dice tournament, but due to the highly illegal nature of gambling in Vietnam I was forced into a quick lie.

“Backpacking. I am a backpacker.” This clever ruse seemed to fool the guard, who stamped my visa and let me into Hanoi. I had vastly underestimated the seasons and arrived in January, which was the middle of the Northern Vietnamese winter. Nothing is more depressing than a socialist-inspired city in the middle of winter: grimy, gritty and almost greyscale through the haze of rapid industrialisation, Hanoi in winter is about a strong an argument for drinking as you could find.

I met my travelling companions at Beer Corner, a crowded spot whose name means it requires little explanation: dozens of local bars crowd the street with tiny plastic stools and locals and travellers in equal measure fight for space to sit and drink cheap beer in copious amounts. Bia Hoi is the local drop, a lager that tastes exactly like what you’d expect from a beer made by Communists, somewhat insipid and lifeless. It was only 25 cents a glass though, so we reconstituted ourselves until the local police came and shut the whole thing down. 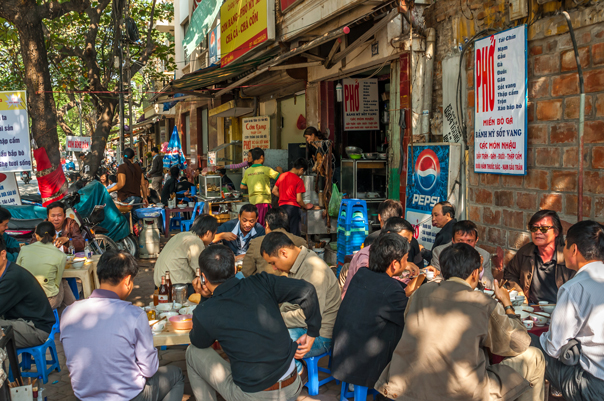 Apparently the whole city has its streets cleared at midnight (and you thought the 1:30 lockout was bad?) but luckily we had thought ahead and bought some local spirits in advance. The first bottle was imaginatively named Vodka Hanoi and was much the same as the Bia Hoi in that it went down like water and was largely flavourless. The second bottle was “Wall Street Whiskey”, and was surprisingly not all that bad. A bit on the sweet side I will admit, but it wasn’t apparent until I was halfway through the bottle as to why: in very small writing beneath “Whiskey” were the words “flavoured spirit”. This rather ominous sign indicated that the ‘flavourings’ used were potentially (at best) esters, aldehydes, chemicals and colorants that had been added to neutral spirit to make it resemble a whisky style flavour.

My suspicions were confirmed by our murderous hangovers the next day, and we decided to flee the city for a more remote location, fearing the heavy handed local police might spell trouble for us in the future. A five hour bus ride through industrialized rural Vietnam was as inspiring to a hungover man as one might expect, and all that was for sale on the bus was warm beer, sweet beef jerky and crab-flavoured snacks, none of which cured my ills. Much later, after climbing over a half-sunken ferry to board another ferry and then yet another bus ride, we arrived dishevelled and thirsty at our remote destination, Cát Bà Island.

Cát Bà Island is a tiny island in the southern most reaches of the Ha Long Bay Archipelago in the South China Sea, and a burgeoning tourist destination. During summer that is; it was the middle of winter so of course and most of the town had shut up shop, lending a sort of deserted ghost-town vibe as we stumbled into the nearest open eatery for Pho and Bia Hoi. Our spirits lifted further when the owner offered us what he called “Happy Juice”, a bright yellow liquid that he poured us all a round of shots of. Never one to refuse a drink I took it down, expecting the oily and abrasive formaldehyde-style snake wine or the decisive baiju-style Chinese distillate I’d suffered through before, but what we got instead was a herbal, half-way between rice and barley flavour that I would hazard to guess lived around the 17% to 19% ABV mark, similar to a shochu and flavoured with some unidentifiable herb.

The owner could not tell me what the herb was, he said, but they made it on the island. Sensing a love of liquor he pointed us toward the local dive bar which was resplendent with all the trappings of a backpacker bar in this part of the world: mojito buckets, laughing gas and a looming sense of dread, but all I was interested in was hunting down what this Happy Juice was. 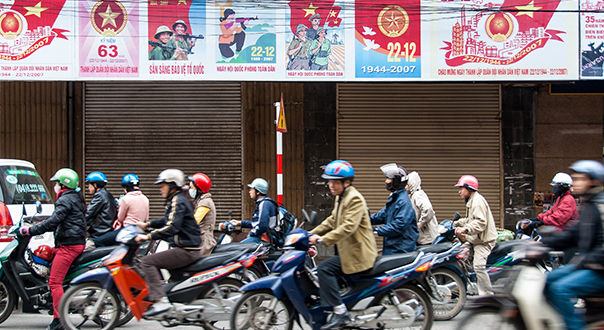 The local liquor stores showed no signs, instead selling plastic five litre bottles of vodka, Chinese brandy and a disconcerting amount of Singleton Glen Ord. Questioning the locals was fruitless as well; few spoke English and the few that did only knew enough to try to sell us rings or model pirate ships. Feeling defeated we retired to our hotel, where a friend produced a pocketful of herbs she had been given to while trekking the rice paddies inland. The locals chewed it to ward off toothache, she had been told, but never for fun. I chewed it, my face went numb, it certainly tasted fun. We added the herbs to a bottle of Vodka Hanoi to see what the effect would be, for the purpose of scientific research of course.

The result was utter catatonia.

The next evening, with one of our number still stricken down by the previous day’s activities, we ventured inland and away from the tourist trail to hunt for more evidence of these Vietnamese moonshiners. Stopping for a meal at a roadside shack that specialised in horsemeat I again found this bright yellow “Happy Juice” – Labelled as ‘Mann Vodka’, I thought I had found my source, until I saw the owner topping up the empty Mann Vodka bottles with Happy Juice from a gasoline container.

He too could only tell me it was flavoured with herbs, and you could not buy it in shops because the government had disallowed it. Interest spurred even further I had to drink several bottles of it to try and discern the flavour. Herbal, floral, it was just impossible to pick. He told me it was made of fermented rice, but distillation is a hard concept to explain in another language. We eventually settled on “cook”, so there was some method of distillation of a rice wine, but drawing several pictures of still types only generated a lot of argument from the crowd of Vietnamese men who had gathered around to try and decipher my diagrams.

I fruitlessly asked the owner, who spoke the most English out of the group and had mentioned the spirit was made by his grandfather, about how they knew the distillate was safe, about how they measured for methanol content (not is so many words, of course – we both agreed badly distilled wine could be ‘poison’) – he replied that we should trust his grandfather. When I asked about untrustworthy grandfathers and people getting sick, he grinned as he told me that was why the government said they could not sell it. I asked if I could meet his moonshining grandfather, but the owner said I could not. It was the off season, and he was on holiday. Where? In Australia, of course.

Three men then offered us shots of a murky brown liquid they were drinking from an old 2.5L Coca Cola bottle. When I asked what it was they just kept laughing and repeating “Bee Jelly, Bee Jelly”. Apparently this was Royal Jelly Wine, a great honour to be served in this tiny fishing community. It turned out to be a hell of a lot stronger than Happy Juice, and when my eyes cleared the three men had leapt onto the back of a single motorcycle. I shouted after them if I could meet their winemaker, but they simply laughed, revved their bike and promptly crashed into a pile of folding chairs. They leapt back onto the bike and off into the night, RBT clearly not an issue on Cat Ba island.

Giving up on finding Vietnamese moonshiners, we spent the next day on a fishing boat with a toothless man who spoke no English, driving us around the islands and fishing villages of Ha Long bay. Determined to win back some pride I decided to live my own beer commercial: As night fell and we returned to our island I bartered the driver with my cheater bottle of Vodka Hanoi (A personal tip – whenever travelling always carry a small bottle of the local hooch. This speaks a million times louder than any phrasebook when offered to a local in conjunction with a broad grin. I once avoided a mugging on a train to Warsaw in this same way, but that is another tale.) Instead of returning to the pier I convinced him to pull into the private beach of our hotel, where I dove into the water and stood chest deep in water pulling the mooring rope to draw the boat closer to shore, so my associates could disembark without getting wet, then walked out of the ocean to the beach bar and ordered a frosty beer.