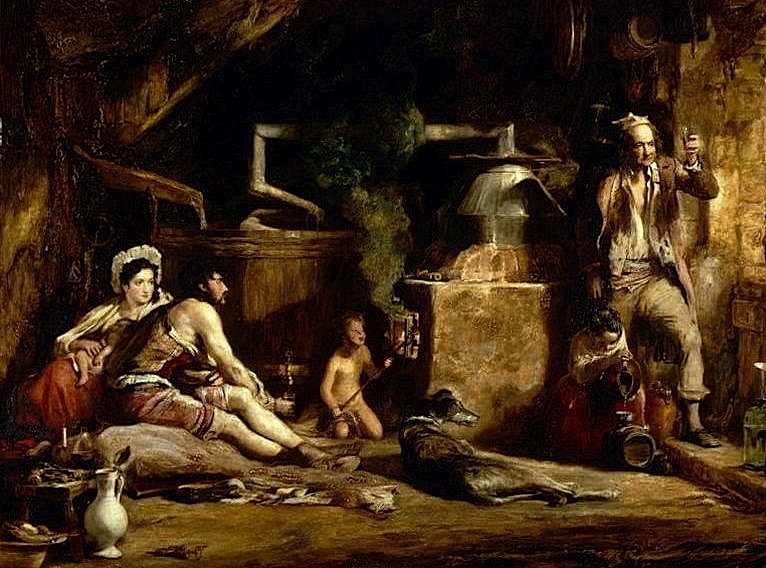 This St. Patrick’s Day, we delve into the archives for this look at the history of Irish whiskey — and how the world almost lost it — from Edward Washington.

The history of Irish whiskey is a long tale. Too long for now. But what’s assured is that the Irish were distilling rudimentary forms of what we’d call whiskey long before Scotland’s Registry of Public Treasury listed, “Eight bolls of malt to Friar John Cor whereeith to make aqua vitae” in 1494.

Up until the end of the 18th century the Irish industry was extensively a domestically based one; Ireland was a landscape of individuals manning their pot-stills and making rough, fiery spirit for local consumption. Ageing spirit was neither a practice or a luxury and the spirits back then were, for lack of delicacy, virtually undrinkable by contemporary standards.

That said, these early spirits served a good purpose for Ireland’s population and Brian Townsend, author of The Lost Distilleries of Ireland, points out that a prime enthusiasm for Irish whiskey consumption was to shake off the bleak desolation that many Irish experienced as part of their daily lives. ‘Once the Irish realised the euphoria that this new spirit created, it became the duty of every Irishman to produce it’, Townsend wrote. Not a bad national agenda.

Like any industry that gleans a profit for the government the production practices of Ireland’s distillers greatly improved throughout the Victorian period. This was a time when science and technology was effecting mans’ life in numerous ways and the global distilling industry benefited from the inventions of tools like of the hydrometer and the saccharometer; both these tools allowed for far greater control and accuracy when creating commercial volumes of spirit. Other methods of standardisation, empirical practice and structure also allowed the industry to develop into what we might recognise today.

As the whisk(e)y industry in the British Isles developed there were a couple of factors that initially gave Ireland’s spirit an edge. Both the Irish and Scottish pot-stillers were in effect similar in nature and competing for the same market. Both were based in agrarian practices, with the Scot’s single-malts being primarily made at opportune times during the year when water and grain was available in surplus. To distil the Irish used larger pot stills than the Scots, they also traditionally distilled their spirit three times. These factors were to have a great impact on their product as it gave less variation in the spirits they produced, and also produced a lighter, milder distillate that was agreeable to the ever increasingly sedentary populations of England’s industrial cities.

Victorian England was wrapped with the Irish spirit and it’s said that the Queen herself once stated, ‘The only true Irish friend I have is its whiskey’. Still, despite rapid advances in industrial method the Irishman was a traditionalist by nature and was not keen to let go of his pot-still production ethos. This paved the way for more commercially entrepreneurial methods to take over in the long run and is a key point to note when considering the demise of Ireland’s whiskey industry.

In 1830 Aeneas Coffee released his continuous still to the world proclaiming that it would boost production, relieve overheads and streamline business. The majority of Irish distillers however- advocating tradition – turned him down wholesale, dismissed his contraption and stuck their heads back in the sands of pot-stilling. Aeneas Coffee was an Irishman though, so why did his own kin turn up their noses to a man professing positive revolution?

Reasons abound, but Coffee was a former officer of the whiskey excise who had spent many years combating illegalities in the trade and generally putting himself in the way of loopholes (and smugglers) as they appeared. It is also said that in his time as an exciseman Coffee had done a lot of good for Irish distillers and their cause, however his previous employment was a hangman’s noose in the trade and they were not inclined to trust him.

Another factor for their rejection of his still was that they simply didn’t like the spirit that it produced. It was tasteless and lacking in character and this went completely against the philosophies of the national spirit. The technically advanced nature of the still was also said to unnerve the more traditional pot-stillers, who were largely from farming backgrounds where the simplicities and honesty of chamber-charged distilling was what they understood and trusted. 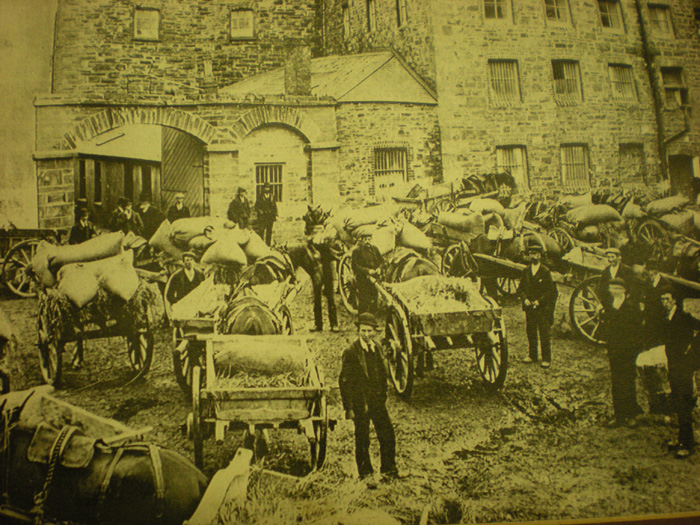 It should also be noted that the advent of the Coffee still didn’t simply bring a boon of fortune for the Scottish pot-stillers either — far from it. They were also to feel the impact of changing commercial practices and many famous single-malt names vanished from the landscape, either bought up by the large commercial companies or closed down from financial ruin. The important factor in the survival of the Scot’s pot-still industry was that their spirit formed the integral part of the blenders’ product so they would never be left to rot.

But back to the Irish, and whatever their individual reasons for rejecting Coffee were the decision left them on the side road while freeways were being paved. E.B. McGuire, author of Irish Whiskey, put it well when he said: ‘Irish pot distillers, who had traditionally dominated England and her global reaches, were too conservative to notice the changing of the whiskey landscape until the blended whiskies were firmly entrenched’.

McGuire’s words of industry traditionalism are brought to life in The Irish Whiskey Still, (pictured at top) painted in 1840 by David Wilkie. Even thought the work is now viewed as an exceptionally romantic and visually unrealistic impression the life and times of the average Irish person in the mid-19th century, the depiction of a rural Irish whiskey pot-still worked by a local family on a small scale is a window into an industry which at that very moment was stuck firmly in its ways.

This changing of the whiskey landscape didn’t happen over night and it took until the end of the 19th century for the blended market to usurp complete dominance. During this time Ireland was also beset a raft of serious troubles that would have probably hindered industry growth even if they’d accepted Coffee’s invention in the first place.

The Irish famines (1840s) virtually put the nation to a standstill. Successive failures of the humble potato crops – staple diet of the masses – put immediate pressure on the most basic of living standards. Mass emigration shed Ireland of millions. Domestic issues with imports of grain during and after the famines restricted the ability to feed the population let alone to actually distil. Increasingly Draconian alcohol taxes forced the Irish industry into a hard place and also forced the drinking public to source the cheapest tipple to sooth their woes. Gin from England’s continuous stills was often on the menu.

Between 1840-1860 around 50 per cent of Ireland’s distilleries closed and between 1830-1860 Ireland went from being the single biggest market for spirits in the British Isles to being the smallest. Increasingly vocal and politically influential temperance movements around Ireland also drew down on the consumption of hard spirits, denting market penetration on the home front. The waves of emigration did help to somewhat spread the presence of Ireland’s spirits and beer around the globe as wherever the Irish went it was asked for. However the changing economic and commercial nature of the whiskey industry would leave little room for sentimentality and Irish whiskey entered its Ice Age.

With the turn of the 20th century things were looking bright for Europe. There was “dazzling hope” for all said Blainey is his Short History of the 20th Century. Yet there were also, “dark, slowly shifting clouds hovered above the light.” For the Irish whiskey industry these clouds came in the form of two World Wars and a period of economic depression between them, a reduction of distillation volumes decreed by law during war time, violent political and armed conflict with England for the right of independence in the first quarter of the century and subsequent trade restrictions that booked Irish products out of the British market. There was also American prohibition. 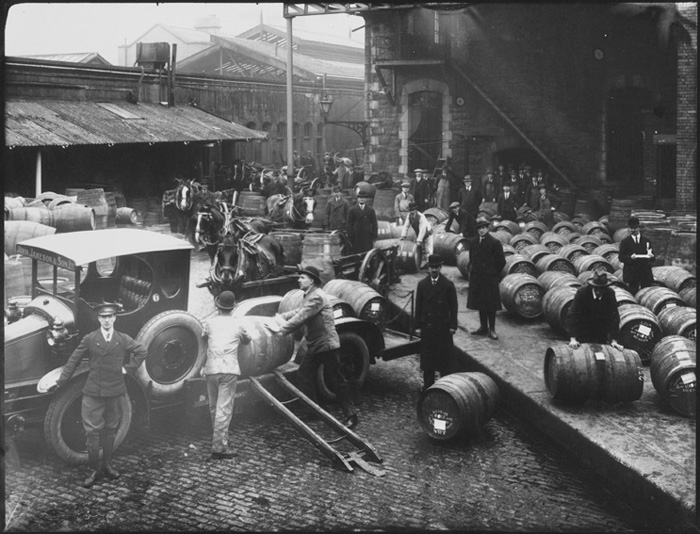 During the First World War Britain seriously reduced its pot-still production; grains were scarce so the British Isles was hardly afforded the luxury of a dram. What favoured the column still industry was their operational capacities which produced a near pure alcohol that could be turned into cordite – a product used in explosives and artillery shells. The problem for the Irish pot-stillers (and the Scottish too) was that their industry was solely focused on production for one market – beverage consumption. The commercial continuous still firms also produced huge amounts of yeast for their operations and since regular imports of yeast (for home front necessities such as bread making) from mainland Europe were cut off they, turned this ability into more profit.

Ireland also began a serious campaign for independence (watch The wind that shakes the barley if you want an insight) in the early 1900s and by 1922 they had achieved a partitioned independent state from England. While this was victory of sorts industries subsequently found themselves blocked out of the British market making it harder to sell their goods – whiskey included. Following the First World War the USA was a Prohibition stronghold and Ireland’s spirit was no longer welcome. When the legislation was finally repealed exports once again began, however Scotch whisky had made significant inroads with savvy marketing. It was also cheaper than Ireland’s whiskey so the odds were stacked against it form the get go.

The turbulence of the next 50 years gave little opportunity for the Irish to re-enter the market in significant strength. Yet it has maintained its dignity and seems set to re-emerge in the 21st century as a real identity in the whisk(e)y landscape. Company amalgamations, new marketing drives and up-to-date promotion campaigns have helped to keep the industry from disappearing and the story of its rebirth is very much alive today. So put the single-malt down for a minute and pick up an Irish. Whiskey that is. And let’s help pick this once whiskey giant up off the ground.