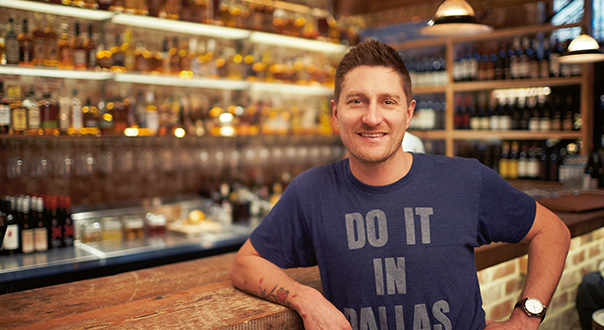 Andy Freeman was recognised for his Outstanding Contribution to the bar industry at the 2015 Bartender Magazine Australian Bar Awards. Photo: Cheyne Tillier-Daly

This year’s recipient of the Outstanding Contribution award is Perth’s Andy Freeman. He was co-owner for a long time of Luxe Bar, and has since opened the award-winning Varnish on King, Darlings Supper Club, and most recently, The Flour Factory. He spoke to Sam Bygrave about ideas, and how to get started with your own bar…

The first time is hard, the second time is easier, and by the third time, you’ve got your infrastructure, it’s easier — it’s not your first rodeo. You know a little bit more about how much things are going to cost.

Every bartender wants to own their own bar. Doing it? You just got to do it. I don’t know how else to put it. It’s not that hard. You can set up a company over the phone with your accountant and you’ve got it in three days. It’s a phone call, it’s not a big thing. It’s all the mystique about it all that probably scares people off — it’s not that hard. Running the business is hard. It’s just building. Then let the bookkeeper do what she does. That’s her job. If you [each] do what your fucking good at, collectively, you can do some good things.

I’m lucky that I have the guys that I trust, they don’t party, they know how I roll. I’m very straight up and down. If there’s a problem, then we’lll talk about it. I can go home and I know that the business’ best interests are at heart even when I’m not here, and that’s a beautiful thing. Some people find it hard to let go, I don’t. Not now. I’m going home, these guys have got this. I can sleep, not worrying. It’s good.

I do business plans, it’s actually very healthy. From start to finish. Put it down, then you can have a look back, after three months, and you know if you went that way and whether it was part of the plan. Write it down.

Who are your biggest competitors? Know the market, what percentage is that one competitor of 100 per cent of competitors? Think about it, and why. [Get] a bottle of wine and just sit there, and be present in it. Then it’s on paper, you’re clearer. I was clearer. For me, it’s not the starting point but it’s when I’m about to tip money in. How much are you going to need?

Maybe I’m not clever enough, but I don’t pay for those reports that they do. I Google around the local area. I always meet with the local council, sell the dream to them first. And the Department of Racing, meet with them to say this is what I’m doing, how do you feel? And the liquor enforcement, the superintendent. I do plant a few seeds before to make it easier six months down the track — I think that’s helped us a lot.

I’m happy the market has responded well [to The Flour Factory] because you never know. Every dumb idea in my head, I’m like “wow, that’s awesome.” It’s a bit of luck, and a bit of location dictating. Say you want to open a hamburger and marshmallow joint — the planet that I live on, that could work. Would you put that on a beach somewhere? You know, hot dogs and pizza [like at The Flour Factory]. With the Wildcats and pre-theatre, with the CBD and they want a quick lunch, the train station’s right there, it says, to me, it starts ticking boxes.

I guess it’d be a hunch. But things become more for me. I start building, and I think “let’s add that, put that in that corner,”— all of a sudden we’re doing breakfasts — it’s a bit of artistic freedom I guess. I build off plans, but I draw on a napkin what I want. Then I give it to someone to draw up, and then I start building — but I’m always sort of rapping as we’re going. I’m lucky because I’ve got builders who have done it for me a few times. I’ll get coffees for everyone in the morning because I think, today I’m going to fuck you up. Rip it down, move it over there.

You can’t just keep going and going. There’s things that I know we could have done a bit better, but I’ve learned now that I’ll know that, but you’ll never know that. If it’s full of 500 people no one will ever see that flaw anyway, and you learn to forgive yourself. You could keep tinkering forever, but you’ve just got to move on.

I’m lucky — I’ve got a good one. She gets it. I was always in bars when we met, so late nights and whatnot. She always owned her own businesses, so she understood that some days you just have to work seven days. I don’t need to explain, she knows that things happen and she gets it.

Now we’ve got little kids. And there’s probably other guys in the industry that are in a similar boat, with young children, working really hard as well – how do they all do it? I’m home for every brekkie and dinner, swimming lessons every Sunday, date night with the wife when you can. She’s probably the one who gets the least of me. I’m just lucky with Nicole.

0
Australian Bartender October 28, 2015
No Comments Yet