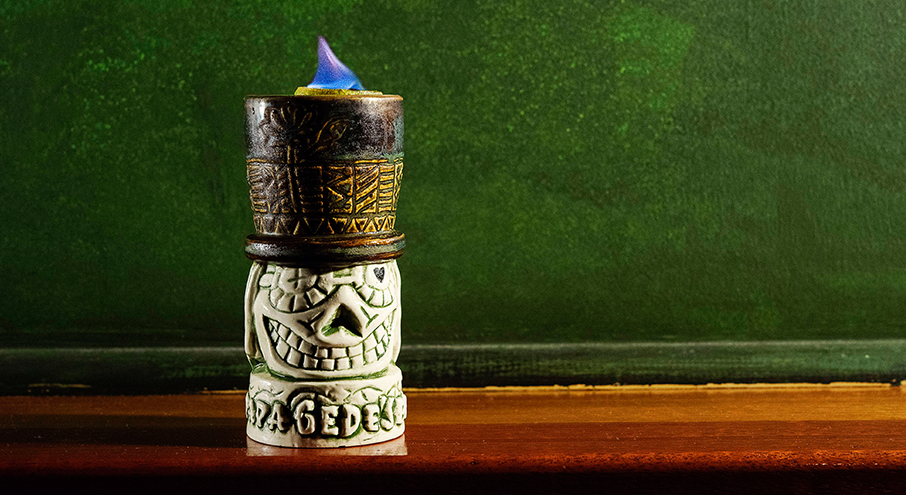 Shake all ingredients and strain over ice in a tiki mug. Garnish with a lime husk and light that thang on fire.

Papa Gede’s, the Sydney CBD small bar with a good whack of voodoo about it, turned two last month, and to celebrate launched a new menu (which looks great, we’d like to add). As you might expect from a bar that sells more than a case of absinthe a week, they’ve got a decidedly voodoo feel to the place (Papa Gede being the voodoo spirit of lust and humour), and you could say this lends itself to their biggest selling cocktail.

“The Zombie is the number every week,” said co-owner Joshua Ng.

The Zombie is a drink that is 91 years old, tracing its roots back to Donn the Beachcomber and the origins of the tiki bar. There’s famously two recipes that Donn Beach had — the 1934 recipe (also printed here) and the version of the drink he served up in the 1950’s.

Shake everything with ice and dump into a big tiki mug or glass. Cap with crushed ice and garnish the heck outta it.

It’s a recipe that lends itself to variations. We figure the key components of the Zombie must be a few rums — and some overproof rum in there, too — and a hint of absinthe. The version that Papa Gede’s is making, presented here, throws some apricot liqueur in there, and the absinthe comes through nicely. Actually, really nicely. The idea for The Zombie, and all tiki drinks in general, is to get the balance of flavours right — you don’t want one element dominating.

And much like Donn Beach famously batched ingredients (and kept the contents secret, so that other tiki bars couldn’t still his recipes), the guys at Papa Gede’s batch theirs, in particular the spirit element. The difference is, it’s batched for speed, not secrecy.

When you are a 60pax small bar and cocktails are 90% of the drinks you serve, you want to speed up the process as much as you can.

Notes on ingredients
Papa Gede’s Bar use a spirit mix to help speed up their service. For a drink with this many ingredients — and often served with a lime set alight — you’re best off getting your prep done to get it out quick during service.

The 1934’s Don’s Mix was a blend of grapefruit juice and cinnamon sugar syrup.