Story by Sam Bygrave
The team behind Surry Hills venue, Dead Ringer, is no stranger to success. Owners Tim Philips, Rob Sloan, and David Hobbs have all shared in honours at the Bartender Magazine Australian Bar Awards, with the other venue in their group, Bulletin Place, taking out the title of Cocktail Bar of the Year three times, once for each of the three years the bar has been open. The bar has also sat on the World’s 50 Best Bars list, last year landing at 28 on the list.

(For his part, Sloan picked up the title of Australia’s hottest bartender back in 2008).

The most important gauge of success, however, is the regular guests and busy  nights the bar enjoys, and has done since it opened.

But despite the accolades Bulletin Place has garnered, Philips admits to feeling a renewed sense of pressure when it came to opening Dead Ringer.

“The biggest challenge for us, to draw the musician’s analogy,” he said, “for us it’s like the second album. There’s a level of expectation. People are less forgiving of faults.”

Dead Ringer is a larger venue than the hideawy loft that is Bulletin Place, and second time around, their execution had to be spot on.

“When we opened Bulletin Place, we couldn’t afford furniture — we spent more money on ice machines than we did the interior.

“Having that real bare bones feel, there was nothing on the wall, we did all the tiling ourselves so the grouting was shitty, we hadn’t had the floors polished up like we have now,” he said.

“What we tried to do was to have a really good product, because if we had the product right it would work eventually.

“Opening a second venue, you’re not afforded those forgivings. So we had to make sure we invested in finishings, and make sure it looked as close to a polished product that we could afford.”

And in the end, when the doors opened, it was a polished venue they had. There’s plenty of wooden surfaces, riding that line between an almost Nordic minimalism and a warm, inviting atmosphere. It feels airy and open but never cold nor sparse.

The point that Philips makes about what they could afford is a salient one; their venues are an example of bars that are built on the back of savings, not bank loans.

“We are completely still self-funded, without any help from any bank, and that’s something we’re really proud of that we promote to other bartenders that you too can kind of get to a stage where now we have a bar group and we are completely self-funded just from initially saving for a couple of years.,” Philips said.

‘You don’t need to have this big, phantom of the opera back of house kind of silent investor, you don’t need to have a stupid bank loan or anything like that. You just need to be sensible and have some friends that obviously have attributes that contribute to your business in other ways than to your own.” 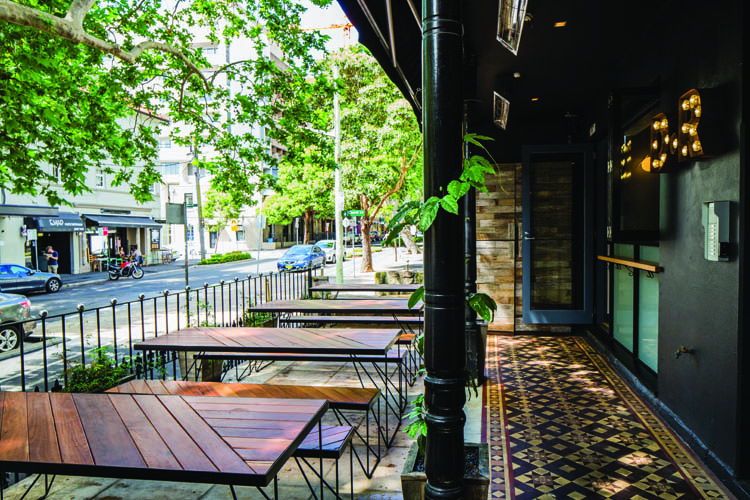 And it’s true that each of the owners bring something to the table that complements the others. Philips guides the cocktail creation and bar service; Sloan takes a lead on the front of house, and ” does all the liquid offerings which are not cocktail,” said Philips.

“The beer list is by him, which we change on a biweekly rotation, same with the wines, we change those regularly as well.
“As soon as I walk out of the bar I start doing pirouettes on the floor, so I tend to stick to what I know,” he said.

And when it comes to the back of house operations, that’s where Hobbs (who, along with Philips counts Milk & Honey on his resume) plays his role as operations manager between both Dead Ringer and Bulletin Place (which is owned by Philips, Sloan, and Adi Ruiz).

“He’s our back of house jedi who we look to in all things technical,” said Philips.

The big switch up from Bulletin Place is the food offering that comes from Dead Ringer. With a full kitchen in operation, Dead Ringer is as much a restaurant as it is a bar.

“When we opened it, we very much wanted to be a bar that did good food,” said Philips. In the kitchen is Tristan Rosier, a chef who has earned his stripes in the fine dining world.

“Much like a band hates for their music to be pigeonholed, I always hesitate to pigeonhole a chef’s style of food,” said Philips.

“Tristan’s had huge influences from fine dining: French cuisine, he’s done his time at Est, then he’s taken that French technique and applied it to more humble ingredients in a more humble setting at Farmhouse.”

Expect the food at Dead Ringer to be driven by the produce, rather than the efforts of a chef imposing himself on the food.

“It’s food that’s made to be shared, that uses the best local ingredients and served to the best of our ability,” Philips said.

Whereas at Bulletin Place, the drinks have no need to accomodate food (you know, charcuterie goes with everything as far as we’re concerned), it’s the food at Dead Ringer which is cause for a slight deviation from the Bulletin Place style of drink.

“We didn’t want there to be an obvious link to food and drink — I’m still definitely leaning more towards the sceptic side of cocktails matching with food,” Philips said.

“I love wine, I love fermented products of everything, whether it’s a nice scrumpy cider or beer or fortified wines; [but] I think a lot of the time table wine suits food better than any cocktail or spirit.

“At the same time, if you’re going to have cocktails on the list that are going to be had with food, you don’t want them to overpower each other,” he said.

“The drinks we do at Bulletin Place, I would say, clash with food. They’re brash, big, fruity, dry flavours; we very rarely use a modifier in a cocktail [at Bulletin Place]. It’s just spirit, citrus, produce, a sweetener and a bitters perhaps.”
Those considerations are why you’ll see plenty of sherry popping up on the cocktail list.

“We definitely dialled up the more subtle aromatic fortified modifiers at Dead Ringer to bring the price and alcohol level down, and make [the cocktails] more able to cope with food.”

That being said, the place still feels very much like a bar.

“Restaurants we know very well from working in them and obviously dining in them, but we definitely wanted to maintain the essence of a bar, a place where people feel just as comfortable having a couple of shots and a beer as they would bringing a date and having three or four cocktails, much like they would at Bulletin Place,” said Philips.

We’ve written before about how we feel about bar owners working in their venues — we think it’s been a great boon to the level of drinking and, more importantly, hospitality that we’ve seen ever since the adoption of small bars.

That’s one of strengths that Dead Ringer draws on; Philips is there some four nights a week, behind the bar, and we’ve yet to visit on a night when Sloan or Hobbs isn’t out front working the floor. It demonstrates the owners’ passion for the project, one that Philips cites as a reason why there isn’t a new venue on the horizon for them at the moment.

“I am very much of the opinion, and this is shared with all the guys, that we really don’t want to open venues that aren’t adding anything to the bar or the food drinking climate in Sydney.

“We’re only going to do stuff if we are passionate about it. And we can really sink our hearts into it.

“People can imagine, but it’s not until you actually own a place that you realise how much time and stress goes into a venue, and to go through that again for something I wasn’t passionate about or the other guys weren’t passionate about, would just be annoying, I would just hate it,” he said.

But, if you’re looking at working with a world class team, perhaps their door is one you ought to be knocking on.

“We’ve got some amazing people that work for us and down the line, if they wanted to go into a passion project of their own, and we can help in anyway, whether it’s financially or our brains or help with concepts, then that’s something that we’d definitely look at doing,” said Philips.

Given the high calibre of talent they have on the books there, though, you might be waiting a while for your shot.
Better still, take a seat at the bar, order some eats, and enjoy what they’ve put together.

Here are three pisco cocktails for your Friday