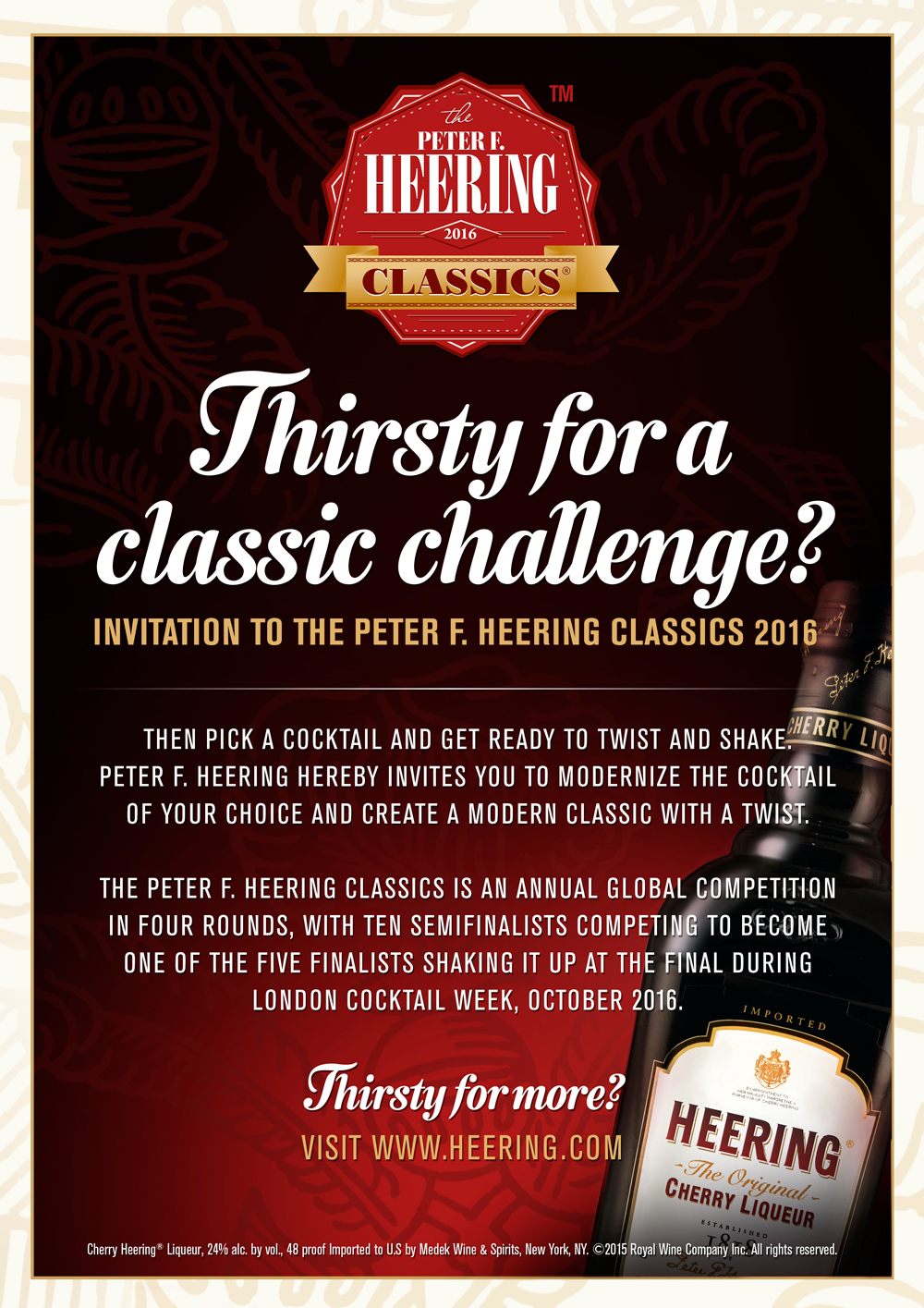 THE 2016 PETER F. HEERING® MODERN CLASSICS – BROUGHT TOGETHER BY THE ONE CLASSIC – CHERRY HEERING®

CHERRY HEERING®, the most famous Cherry Liqueur, purveyor to the Royal Danish Court and produced since 1818, recently inspired bartenders across the globe by announcing The Heering Legends, in celebration of the 100th Anniversary of the Singapore Sling, and today announced the launch of The 2016 PETER F. HEERING CLASSIC CHALLENGE the annual global bartender competition.

The 2016 PETER F. HEERING CLASSIC CHALLENGE invites the best bar talent in the world to contribute to cocktail history by creating their version of a modern classic cocktail, using CHERRY HEERING®liqueur. The competition builds on successful years of the PETER F. HEERING SLING AWARD, which received tremendous support from bartenders, invited to create their version of the Singapore Sling, one of the oldest classic cocktails, created in 1915 featuring CHERRY HEERING® liqueur as the main ingredient. Bartender Niang Tong Boon created this famous and now classic Singapore Sling at the Raffle’s Hotel in Singapore.

The 2016 PETER F. HEERING CLASSIC CHALLENGE asks bartenders from around the globe to pick a classic cocktail and modernize it with a twist that best defines their talent, taste, personality and what most inspires them about using CHERRY HEERING® in a modern classic cocktail. This annual CHERRY HEERING® competition starts with four rounds, with ten semi-finalists competing to become one of the five finalists shaking up their inspired CHERRY HEERING® cocktail during the spectacular London Cocktail Week.

“The evolution of our annual cocktail competition from the Heering Sling Award to the highly anticipated Heering Classic Challenge is perfectly timed to complement the recently revealed Heering Legends, which serves as the ultimate showcase of why Peter F. Heering inspires bartenders around the globe to create their ultimate modern classic cocktail”, said Adéle Robberstad, CEO Peter F. Heering.

How to participate | The 2016 PETER F. HEERING Classic Challenge

Qualification – Pick a classic cocktail and create a modern classic with a twist. We encourage the use of local ingredients in order to recreate the recipe, commercially available products are recommended. The drink must include CHERRY HEERING®. Upload a picture and the recipe between April 18th and May 22nd, 2016 to www.heering.com or Facebook.

Quarterfinal – An international expert jury will select one winner from each participating country. Out of the national winners, ten will be selected for the semi-final.

Semi-Final – The ten semi-finalists will compete during London Cocktail Week at the beginning of October. Our international expert jury will then choose five finalists among the ten. Apart from the honor and media attention, all ten semi-finalist get airfare and hotel stay in vibrant London.

Finale – The five finalists will personally present their cocktails and philosophy behind them at the final during London Cocktail Week 2016. The winner receives €500, a Stelton Shaker and global exposure.

CHERRYHEERING® is an intricate and indispensable component of iconic cocktails such as The Singapore Sling and Blood & Sand, which is exactly how CHERRY HEERING® likes to be seen; as an accessory that adds lavishness, extravagance and civilization to the mix.

Available in Australia through Vanguard Luxury Brands. For supply and other local information, please contact Vanguard at 1300 DRINKS or james@vanguardluxurybrands.com.