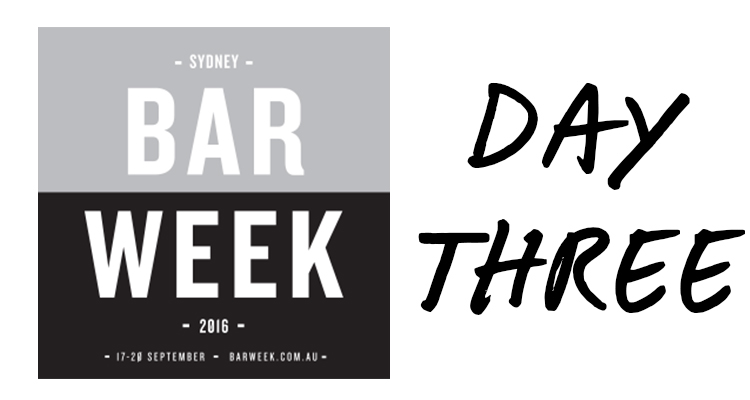 Welcome to Day 3 of Bar Week — the action continues today with a busy lineup of eight big events.

The Bartender of the Year competition begins at 10:30am today at Ramblin’ Rascal Tavern; the Business of bars kicks off, and there’s a whole host of awesome events on — take a look at the schedule below.

To book tickets and RSVP to events, click here to check out the full Sydney Bar Week timetable at barweek.com.au, and take a look below at what’s on today.

Bartender of the Year Rounds 1 & 2
Round 1 – 10.30am – 1pm; Round 2 – 2pm – 5pm, September 19, 2016
RAMBLIN’ RASCAL TAVERN
Head down to Ramblin’ Rascal for the written exam followed by the mystery round of the Bartender of the Year Competition sponsored by Bacardi and De Kuyper. More than 100 bartenders will be whittled down to 8 who will compete live on stage at the Bar Awards. Email sam@spantonmedia.com if you haven’t entered.

Business of Bars Conference — BOOKED OUT
12pm – 4.30pm, September 19, 2016
THE WHISKY ROOM @ THE CLOCK, SURRY HILLS
The annual Business of Bars Conference has gained a loyal following over the years and repeatedly sells out. Join bar industry professionals and operators and discover the secrets of running a successful bar business. Tickets on sale — click here to get yours.

Inaugural Bottled Cocktail Invitational
12pm – 3pm, September 19, 2016
DEAD RINGER, Bourke Street, Surry Hills
The team at Dead Ringer is hosting the Inaugural Bottled Cocktail Invitational, when seven of the finalists for Cocktail Bar of the Year at the Bartender Magazine Australian Bar Awards will bring the best of their cocktails to town for all to taste in the one place. Under the one roof at Dead Ringer you’ll taste the skills of Brisbane bars Maker and The Bowery; Perth’s The Dominion League; Melbourne bars Eau De Vie Melbourne and The Everleigh; Adelaide bar Maybe Mae and Sydney bar The Lobo Plantation.
Entry on the day: $20 – includes voting tokens and a beer.
RSVP: to tim@deadringer.wtf or 0430 820 220 by 26th August if you want to be a part of the event.

Coleman’s Academy Panel — BOOKED OUT
2.30pm onwards, September 19, 2016
RESTAURANT HUBERT, Bligh Street, Sydney
Launched in 2015, the Coleman’s Academy is a mentoring program where women in the hospitality industry come together once a month to communicate, inspire and educate. The doors will be open to both women and men to listen to a collective of strong females across several industries discuss a broad range of issues – both gender related and not. Guests are welcome to become a part of the discussion during the Q&A following the panel’s discourse. Tickets will be $10 a pop — click here to get yours.

Premiumisation of Rum & Exclusive Facundo Range Tasting
5pm – 6.30pm, September 19, 2016
THE LOBO PLANTATION, Clarence Street, Sydney
Join the Bacardi Martini team for a tasting of the premium Facundo range, with an emphasis on some premium drops such as the Bacardi Grand Reserva Ocho Anos which was previously reserved for the Bacardi Family. The Top 8 of the Bartender of the Year will also be announced here.

Here, you’ll delve deep into the reasons why the premiumisation of rum is taking off, sip some Bacardi Grand Reserva Ocho Anos (which was reserved for the Bacardi family up until 1996), and have the rare opportunity to taste the range of Facundo rums from Bacardi. It’s a rare opportunity to sample the super-premium range, which includes Facundo Neo (a blend of rums aged up to eight years and their colour filtered), the Facundo Eximo (with rums of a minimum age of 10 years), Facundo Exquisito (a blend of rums aged 7 and 23 years old from the Bacardi family private reserve), and Facundo Paraiso (a blend of the finest rums aged up to 23 years old in the Bacardi family’s rum library).

RSVP by invitation only. Numbers are strictly limited.

Disaronno presents: Simon Difford — BOOKED OUT
6pm – 8pm, September 19, 2016
THE CHAMPAGNE ROOM @ THE WINERY, Crown Street, Surry Hills
Simon Difford, author of the Difford’s Guide, is the world’s most famous bar critic. Join him and the Disaronno team in discovering what makes “great bars great”, what the “next style of mixing is going to be” and meet the most promising drink offering from the winners of the Mixing Star program 2016.
RSVP: mfabbris@spiritsplatform.com.au

Entry is free. RSVPs are limited to the first 100 people, after that it’s one in and one out on the door. Email admin@neatspirits.com.au to RSVP your place.

0
Australian Bartender September 19, 2016
No Comments Yet