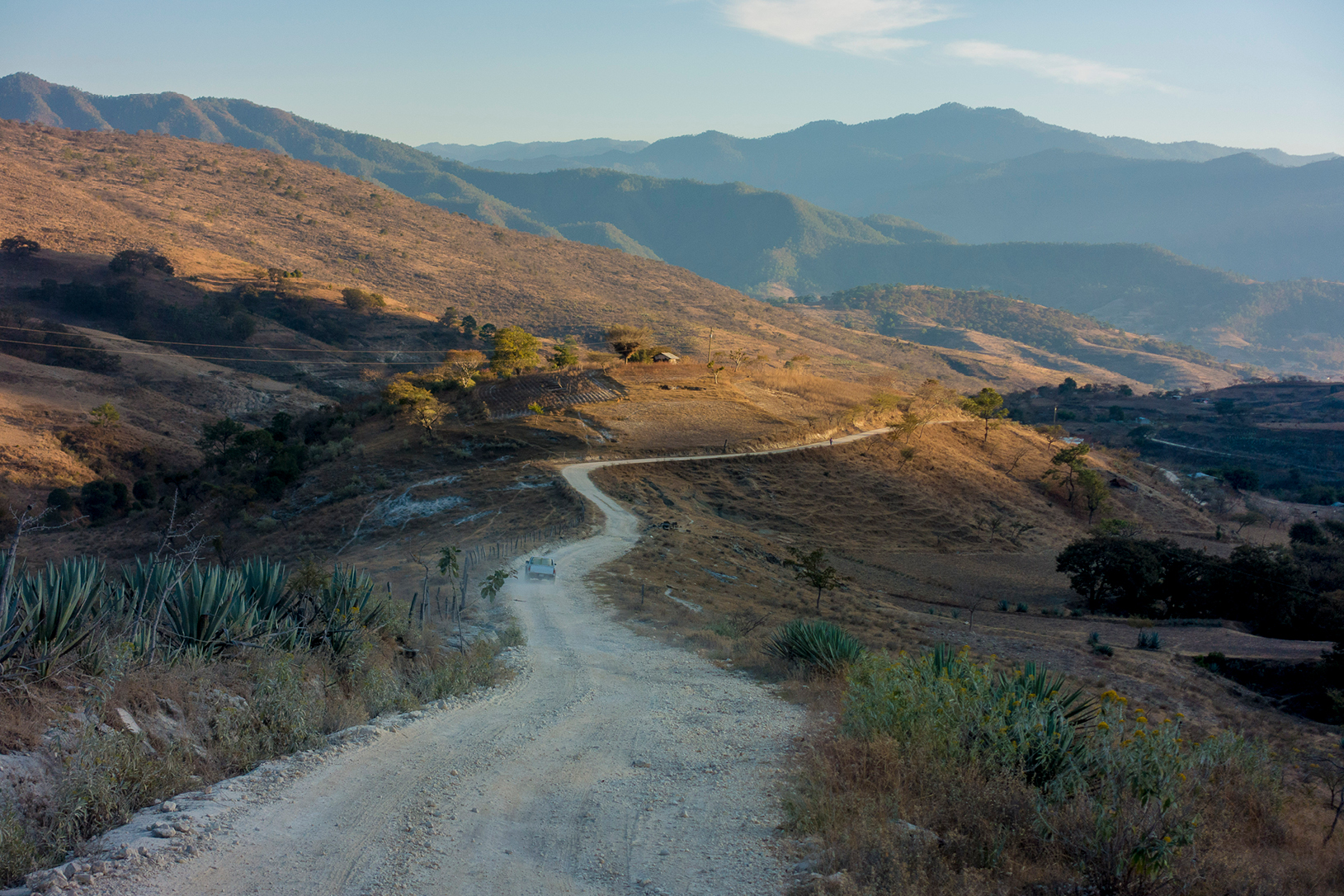 Story and photographs by Phil Bayly

It’s always an unknown flying into Mexico City. As a good friend used to say, it’s one of those places, hot by day, volcanic by night.

I love Mexico — it has an edge to it.

Mexico City, on the other hand is not just an edge, it is more like you’re standing on a razor blade. It’s exhilarating and stimulating on one side, all-consuming on the other. If you step one way you have glamour, culture, style, colour and fine art, step the other way and you can encounter corruption, poverty and destitution, violence and pollution.

When you wake up in the morning, it could be the best day in your life or the worst, and anything is possible at any time; it has a passionate, volatile Latin attitude, dangerous, sensual and wild.

I had just flown in and I was on a mission, mainly to visit some palenques (mezcal distilleries) in the state of Puebla, the latest state to be added to the expanding DOA of mezcal. The mezcal DOA, by the way, is the largest in the world covering some 500,000 square kilometres. 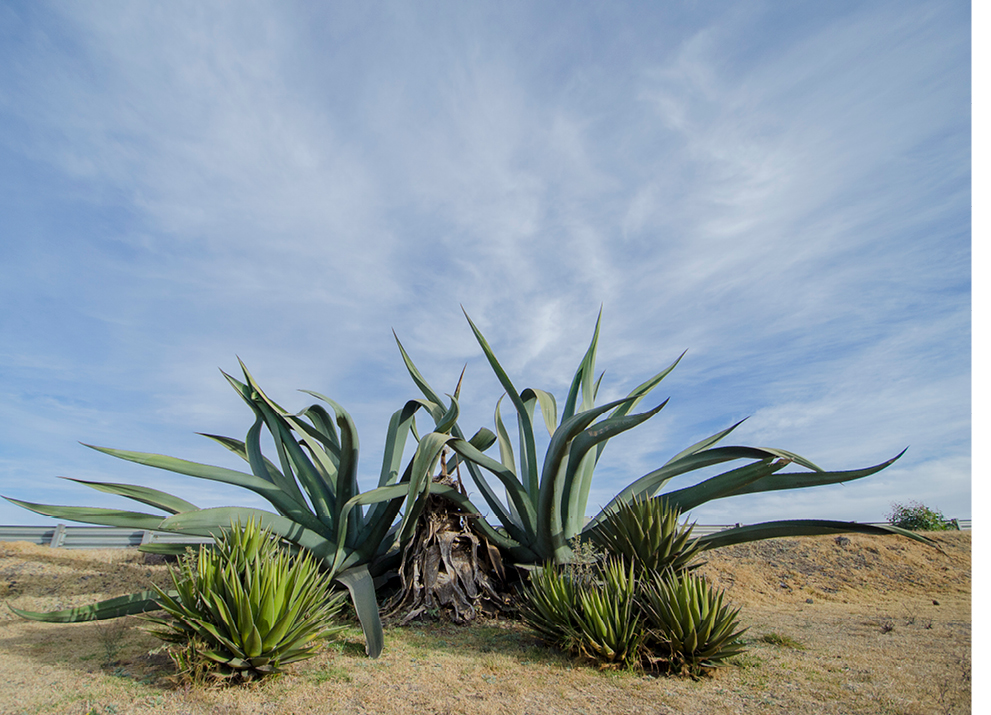 I visited some bars that evening to check out Mexico City’s nightlife, visiting Licoria Limantour and Artemisia to name a few, before crashing out ready for an early start.

The next morning, my driver Celerino and I drove up out of the pollution of the valley of Mexico City, heading southeast past the volcano Popocatépetl, to a clear, bright sunny day and into Puebla state. We drove some two hours on the highway before heading south, off into the mountains, headed for the remote village of San Pablo Aneyaltapec to meet Aurillia Gonzalez Tobon and his family.

There were five brothers and relations all making mezcal from papalote and pizorra (a variety of tepetztate) agaves that take anything from 12 to 18 years to mature; the total population of the town was about 150 people and despite being so small and remote the village has a very old tradition of producing mezcal; it was set in a dry, semi-tropical valley with huge single stem ‘Cephalocereus columna-trajani’ cacti and fan palms. We were now in Tierra Blanco country, high in chalk and limestone. 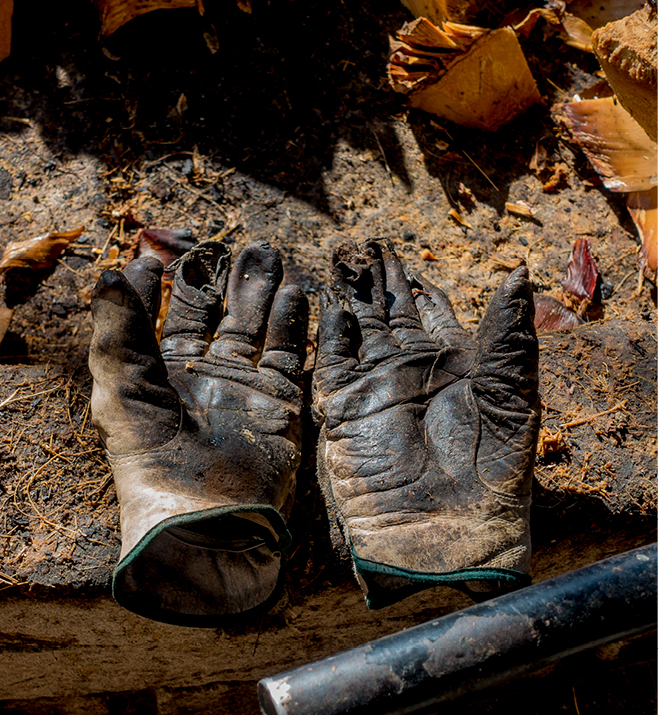 A celebration was taking place and we were lucky enough to be treated to a meal of barbacoa with the extended family, made from a whole goat cooked in an underground pit similar to a mezcal horno or oven, where the meat was wrapped in agave leaves and then buried over hot stones.

I visited five different palenques scattered around the village, the type of stills in use there were quite different from what I have seen before. It was a reflux still, with a 200 litre copper pot built into an adobe oven, with the head or Montera containing a series of three copper plates submersed in water. Aurillio’s mezcal was full of ripe tropical fruits, it had crisp citrus notes yet was creamy, round and soft in the mouth. 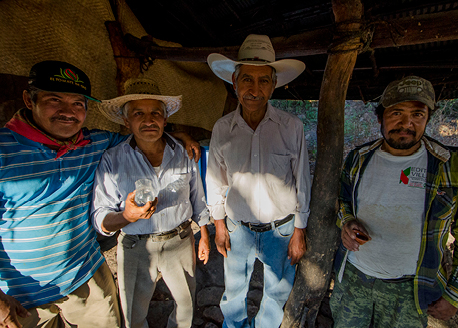 We departed at dusk and Cerelino and I spent the night in a hotel in Tehuacan; we left very early the next morning for our next palenque in the remote community of San Pedro Teozacoalco, in the Mixteca Alto of Oaxaca. It was a distance of some 220km but took us four and a half hours to drive, on some of the worst rocky and rough dirt roads you could imagine. Here we met Fernando — or El Bigote as he is known, due to his amazing moustache. This mezcalero one of the tiniest but most beautifully clean and well-organised palenques I have ever seen. He was making mezcal from wild papalometl agaves that look like tobala on steroids. Fernando may no longer drink alcohol — he fell down drunk one day and woke to find that his friends had shaved of one half of his moustache — but he certainly knows how to make some amazing liquid.

We left late in the afternoon and drove south into the next valley to visit Don Roberto in the tiny community of San Jose Rio Minas; we arrived on dusk and once again ate a meal with all the extended family. It was humbling to be in these remote communities and be invited to share a meal with the little that they had; the humbling thing was that we as guests would eat first and once we were finished the family would then eat what was left. 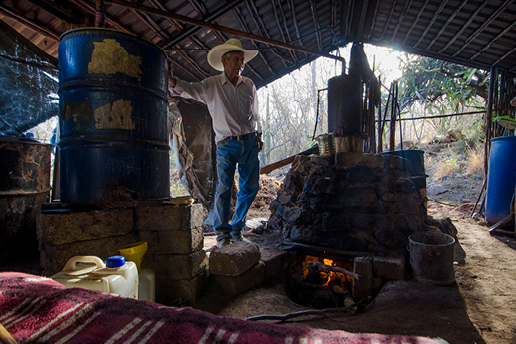 From the village we drove in the dark for about half an hour till the road ended at a suspension bridge about 40 meters in length that spanned a ravine; the bridge was made from cyclone wire and could only hold two people at a time. After we had navigated the bridge in the dark, we followed our host for about 20 minutes, using our mobile phones as torches to find our way. The rough path followed the ravine along the river down to Don Roberto’s humble abode and his palenque. Using clay pot stills he was producing a mezcal made from espadin at 48% ABV — Cerelino described it having “a bright sweet nose of papaya and ripe peaches giving way to a very floral palate like carrying a bouquet of roses and violets… the palate ends with pepper notes, and an herbal component of Hoja Santa and eucalyptus resulting in a refreshing finish.” It was absolutely amazing.

It was about 10pm when we finished and from here it was time to head to our hotel in Teotitlan del Valle, about 20 minutes east of Oaxaca City, a distance of some 150 kilometres, but a drive of about five and a half hours on more rough rocky dirt roads. The road or track was mainly single lane and rough as hell, there were times when we were driving on roads cut into the edge of mountains with a 300 metre sheer cliff on one side some and a towering rock face on the other with no room for a mistakes or on coming traffic. Fortunately it was two o’clock in the morning and we did not see another car for most of the journey.

We were now back in the central Valley of Oaxaca and after a rough night sleeping and a very slow morning, we headed to the town of Chichicapam, set in a high wide dry tropical valley to be entertained by Faustino, a very humble Zapotecan with an incredible skill to produce mezcal. He lets his cooked agaves rest once they have come out of the horno or oven, in a dark place for about a week until a fungus begins to grow on them, he then crushes the piñas and places them in wooden fermentation tanks covered with plastic to keep out the air, producing complex mezcal with high citric notes.

From there it was off to Santa Caterina Minas to visit Luis Carlos, recently awarded high honours for his Mezcal at the National Conference of Mezcal. He uses the traditional Filipino style stills to produce his mezcal, it is beautifully, complex, full-bodied that is deep warm and sweet all the way to the finish. 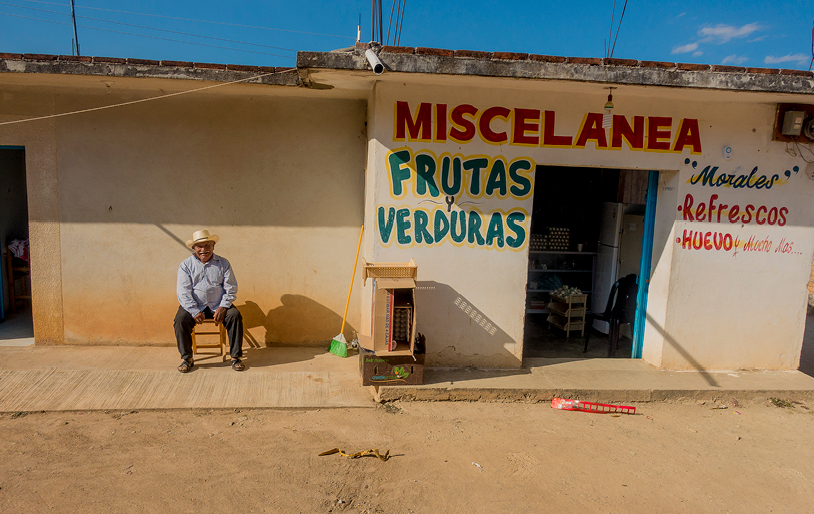 The final day was spent travelling north east of Oaxaca into the Sierras to a back valley near to the Mixe region in the community of Santo Domingo Albaradas to visit Espiridion and his family.

Even though I have been there before it continues to be inspiring and humbling to experience the etiquette that surrounds these communities.

On arrival it was necessary to give a blessing to the religious ‘ofrenda’ or altar in the house, then we took a seat at the main table and sat in silence and waiting for our host to begin conversation. He then offered a copita of Mezcal and before we drank he poured a small portion on the floor in the shape of a cross as an offering to mother earth and the sky above. Once this had been established the conversation began to flow with family members bringing humble offerings to the table for us to eat and from then it was free for all.

After some time spent receiving their hospitality, we were invited to visit his Palenque where he produces Mezcal made from a blend of Espadin and Tobola. I was a truly humbling experience to be in the company all of these great mezcaleros and savour these offerings.

The key element that made all these unique and amazing comes down to the hand of the maker.