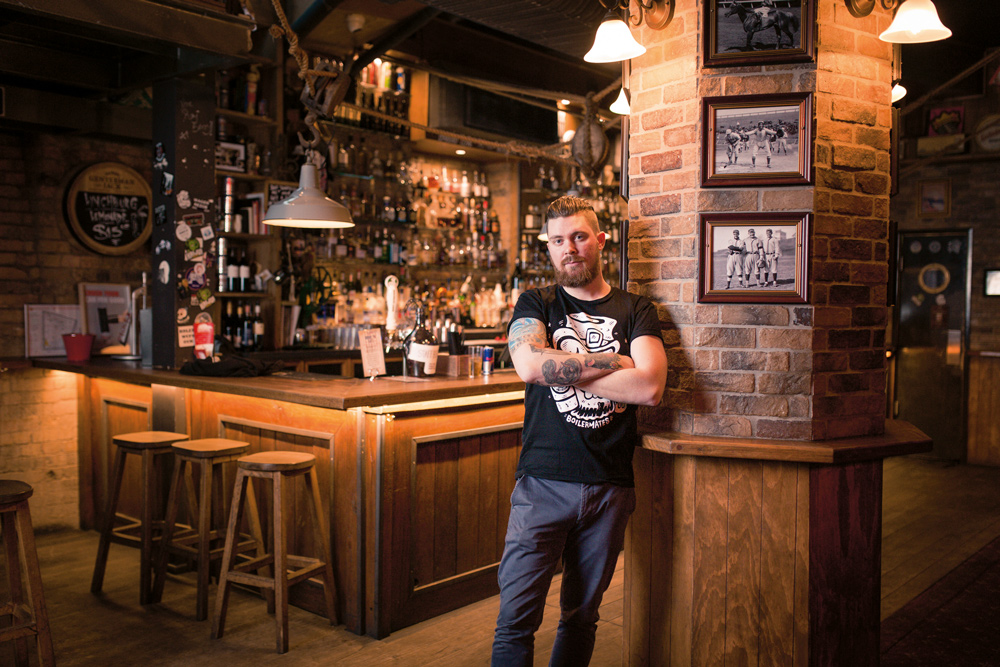 Brooklyn Standard is one of Brisbane’s great small bars. You take the steps down from the street to the basement (which always reminds us a bit of the stage on Saturday Night Live) and the bartenders are always having a good time, the drinks are on point, and the atmosphere, well — it’s a party. We sat down with their general manager Harlen Pointing, and here’s what he had to say.

As told to Sam Bygrave
Photograph by Declan Roache

I’ve been here since the beginning, when I started off as bar manager, and I’ve recently been promoted to general manager. I love it. I absolutely love it — I love the team, and I’m lucky to have really quality bartenders roll through here. We’ve had some of the best bartenders in Australia do stints here, and the current team is amazing.

I’m 28, and started in the game when I was 23. I started at an old Brissie underground techno bar, called Bar Soma. That’s when I started taking it seriously — before that I’d worked in pubs pouring beers — and when I bought my first cocktail book, moved to the Valley, and tried to start taking it seriously.

You can’t go past bars like Cobbler and The Gresham — they’ve got such a high quality of service and that old school mantra, too. I really like bars with atmosphere — places like Press Club and Sabotage Social — I like a party bar. That’s my jam. In terms of drinks and cocktail-making, the Brisbane scene’s exploded, man. We’ve got some amazing bars.

I really think it’s great what we’ve done here in the city, and it’s something that I’m really passionate about, and I know that Ryan [Lane] from The Gresham is as well. We wanted to create our own little precinct, and before The Gresham and us, it was really only these bigger pubs and that kind of stuff. We’ve had such a good reception, I’m so happy with how it’s going. It’s a lot of hard work, but it’s good.

There’s definitely a line. It’s sometimes hard to draw that line between having fun and having too much fun at work. I think it’s really important to draw that line, and I’ve worked at bars, and I’ve seen other bars, where you go ooh, that’s a little too far. As a patron, I never want to walk into a bar and the bartender be drunker than me. At the end of the day, we have a fun job, we have a good time here, but there’s definitely a line, and the guys respect that line. There’s been times when people have crossed the line, and they know about it. It’s a fine line, and sometimes I may have crossed the line once or twice.

The two owners here, Manny and Adam, have taught me so much man. They’re just really good operators. They’re pretty hands on, and they’re great. It makes your life so much easier when you work for someone who gets it. I learned a lot from Justin [Debeer], my previous boss, he taught me a lot with how to deal with certain situations — what to care about and what to let go. Not to stress about certain things that you can’t control. He’d always say if it’s going to happen it’s going to happen, there’s no point in stressing about it.