Bartender and Above Board co-owner, Hayden Lambert, is no stranger to accolades. The expat Kiwi worked the bar at the award-winning Merchant Hotel in Belfast, was twice named Ireland’s bartender of the year, and most recently saw Above Board named New Bar of the Year at the 2017 Bartender Magazine Australian Bar Awards. They’ve just clocked up a year of trade, so we thought the time would be right to check in and see how year number one has been.

Above Board isn’t like a lot of Australian bars. The room has a minimalist feel to it, it’s all straight lines and space and feels like the kind of bar you’d expect to find Lost In Translation’s Bob Harris drinking in.

But the bar is not a fiction and it can be found in the decidedly un-Tokyo backstreets of the Melbourne suburb of Collingwood.

“The idea at Above Board is that less is more,” says Lambert.

There’s space for just 16 seats in this bar, and it’s Lambert you’ll find behind the stick and most often by himself. He combines the role of host, glassy, and cocktail bartender in one person, but that’s not the hard part — the hard part is that there are no other distractions in this bar.

“Above Board was a real simple idea,” he says, “it’s just to keep it simple. Take away a lot of the distraction you have in your bar, and just make an intimate space that is solely based on the people and what they want to drink. When it comes to what they want to drink, we provide a small menu, and it aims to please a lot of people but it won’t please all people. 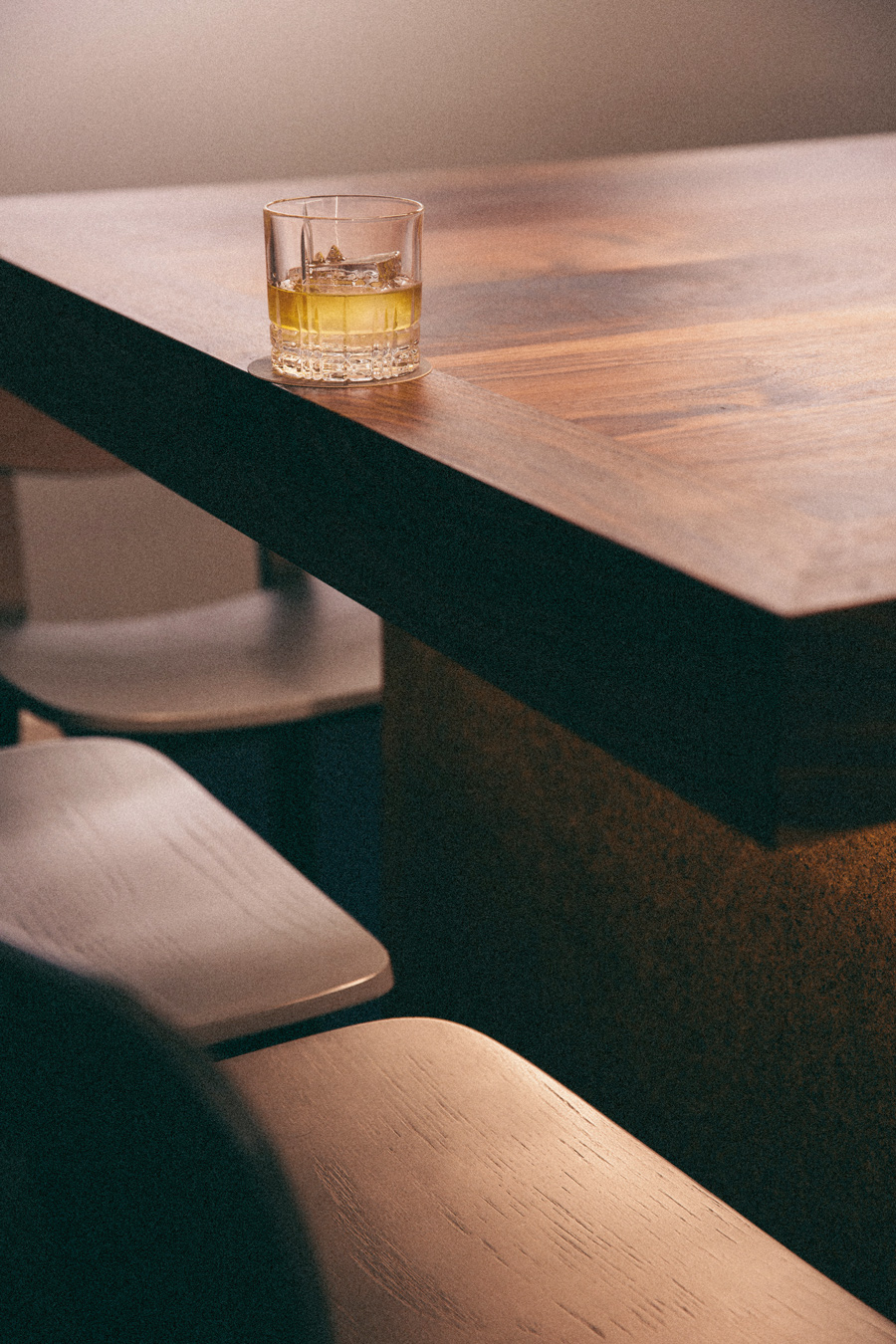 The bar opened this time last year without much in way of a marketing plan — that’s the benefit of a bar that takes only 16 people, we guess, but it also allowed them to refine their offering.

“It allowed us to fix things that were maybe not fixed,” Lambert says. “We had to instal aircon because we opened up at the end of November and there were 35 degrees days. We’re still tweaking service and it’s progressive, we’re always going to be tweaking service. That’s important. The lessons that I learned at The Merchant Hotel and Bar Americano, is that things can always change.”

Lambert says that the minimalist design wasn’t an aesthetic decision per se but came out of that desire to strip things back to focus on what really matters, and because to make efficient use of the space, they’d have to make the bar an island bar with customers seated behind the bartender.

“Basically, for me, you have to have a place for everything and everything has to have a place. So we keep it really simple. All I see now is really complicated bar designs, and the reality is that you don’t need all these things to be good at what you do. We have this idea in the industry that the more equipment that you have, the more stuff you have [the better]; we have the crutches in a bar but it’s relatively simple thing: a sink, an ice well, and a bottle rack, and beyond that we just keep adding [to it]. The idea at Above Board is that less is more. The less visuals, the more impact. The less product, more impact. Less equipment, more impact.”

But whereas some bars with this minimal kind of space are designed as temples at which to worship The Great Mixologist, this couldn’t be further from the reality of Above Board. When we talk with Lambert, the drinks are rarely discussed; what Lambert talks about is the guest, and about anticipating their needs. It’s not about him, you see.

But whilst 16 patrons doesn’t seem too difficult at first blush, when you’re making classically-structured drinks in a sparse room with nowhere to hide, the task of maintaining the room and keeping up the service isn’t an easy one. There’s no bells and whistles to distract the guests. Lambert is host and glassy and bartender. How does he keep things on track? 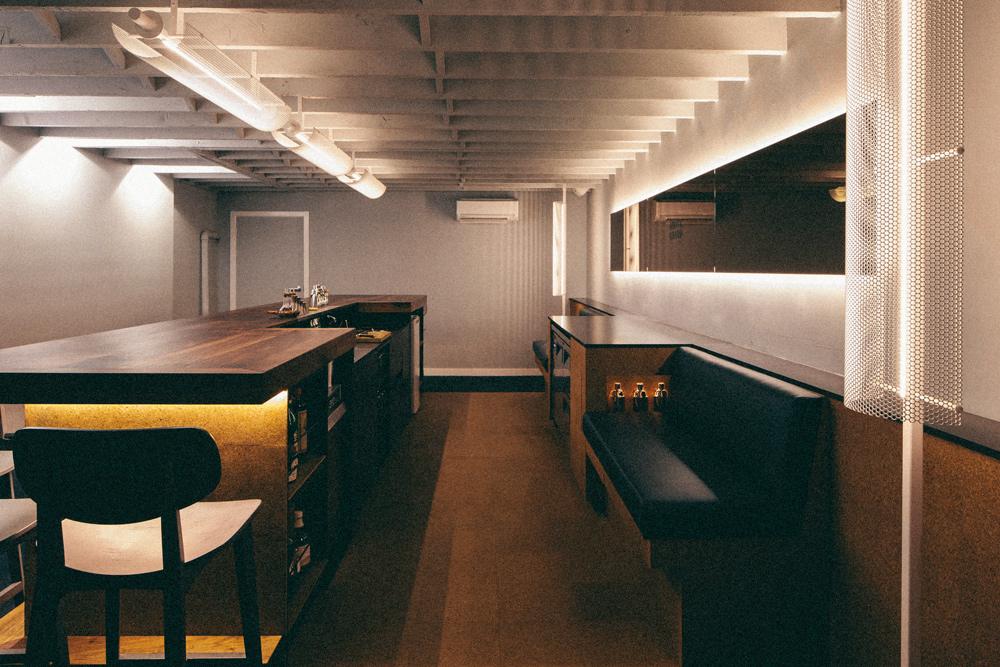 “When someone walks through the door, I’ve got to turn around and give them a quick recognition, a ‘Hello, take a seat,’” he says. “That means I cut off the conversation with the customers I’m already having but they recognise that I need to welcome [the new guests] because I did exactly the same thing for them.

“I try to get menus and water to them straight up so they have something in their hand and they’re being looked after straight away, while I concentrate on finishing what I was doing for the other people. Then it becomes a kind of turmoil, you’re trying to produce everything fast, but you’re also trying to be efficient, and you’re also trying to be slow so that you don’t mess up — you’re trying to maintain a really nice pace.

“It’s a bit like surfing, it’s like waves — you get a certain amount of time in between the little waves, but sometimes the waves are massive and you tumble the whole time. You’re trying to find a really nice pattern; you talk, serve, talk, get more water, organise something. Use your hearing — you’re trying to engage more senses, and you’re constantly listening. You listen, you’re attentive. And that puts you on an even higher stress, because you’re always trying to anticipate the needs of the customer before you’re 10 glasses deep when you don’t have the time to anticipate the needs of customers. That’s really important. It means I’m always eavesdropping a lot on everything.

When we’re asked about what makes Above Board great and, indeed, why we think it took out the title of New Bar of the Year, it’s exactly this attention to the things that matter. The drinks, by the way, are always on point. Lambert has a style that combines as few ingredients as possible in ad rink, but makes a drink which is always memorable.

Much like the bar itself. Take away all the palaver and the bells and whistles and frippery. Without the distractions the drinks, the service, and the company which you keep, is made that much more memorable.