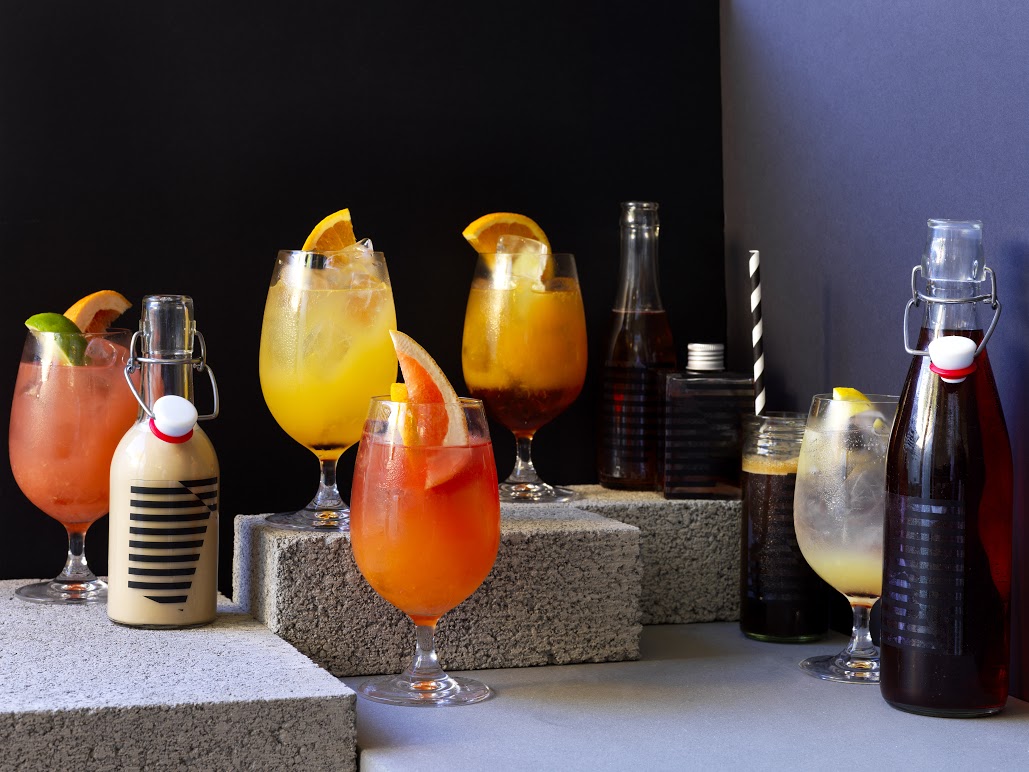 When Maurice Terzini’s Bondi Beach Public Bar opens next, you can expect Spritzes, pre-batched Negroni’s, Old Fashioned’s, and a White Mike Russian when you’re at the bar.

“The [latter] will be served in a can and be called a White Mike Russian because it’s a collaboration between Mike Bennie and Mr Black. We’ve tried to have a bit of fun with it,” Terzini says.

Terzini is the restaurateur and hotelier behind the iconic Icebergs Dining Room & Bar and the 2017 Bartender Magazine Australian Bar Awards New Pub of the Year, The Dolphin Hotel (he’s also involved in the launch of Goldy’s Gin — see here for more on that). For Bondi Beach Public Bar, he’s drawing upon the culture of the 1970’s and 1980’s Australian pub — cue the Harvey Wallbanger and Alabama Slammer they’ve listed on their drinks menu — and updating it with bottled mixers, fresh-squeezed juices, and the strong design aesthetic that has become synonymous with Terzini’s work (just take a look at the design of the menu below to get a feel for it).

The wine list, put together by wine director James Hird, will move past the traditional Aussie pub staple of big, oaked and buttery chardonnay of bygone years and instead highlight a range of minimal intervention wines.

“It’s been great fun putting together the BBPB wine list,” Hird says. “It’s pretty wild for a Public Bar to have Latta Vino orange wine and our exclusive bottling of Cantina Giardino Terzini Anfora Rosato in the mix. We really wanted the Public Bar list to be accessible so we have sourced some cracking lo-fi wine made in the Adelaide Hills (a sauvignon blanc) and pinot grigio from the King Valley in Victoria to keep the beach-goers hydrated.”

Bondi Beach Public Bar opens on Wednesday 20 December at 203/180 Campbell Parade, Bondi Beach — visit them online at bbpb.com.au
.
Take a look at the drinks list and the food menu below. 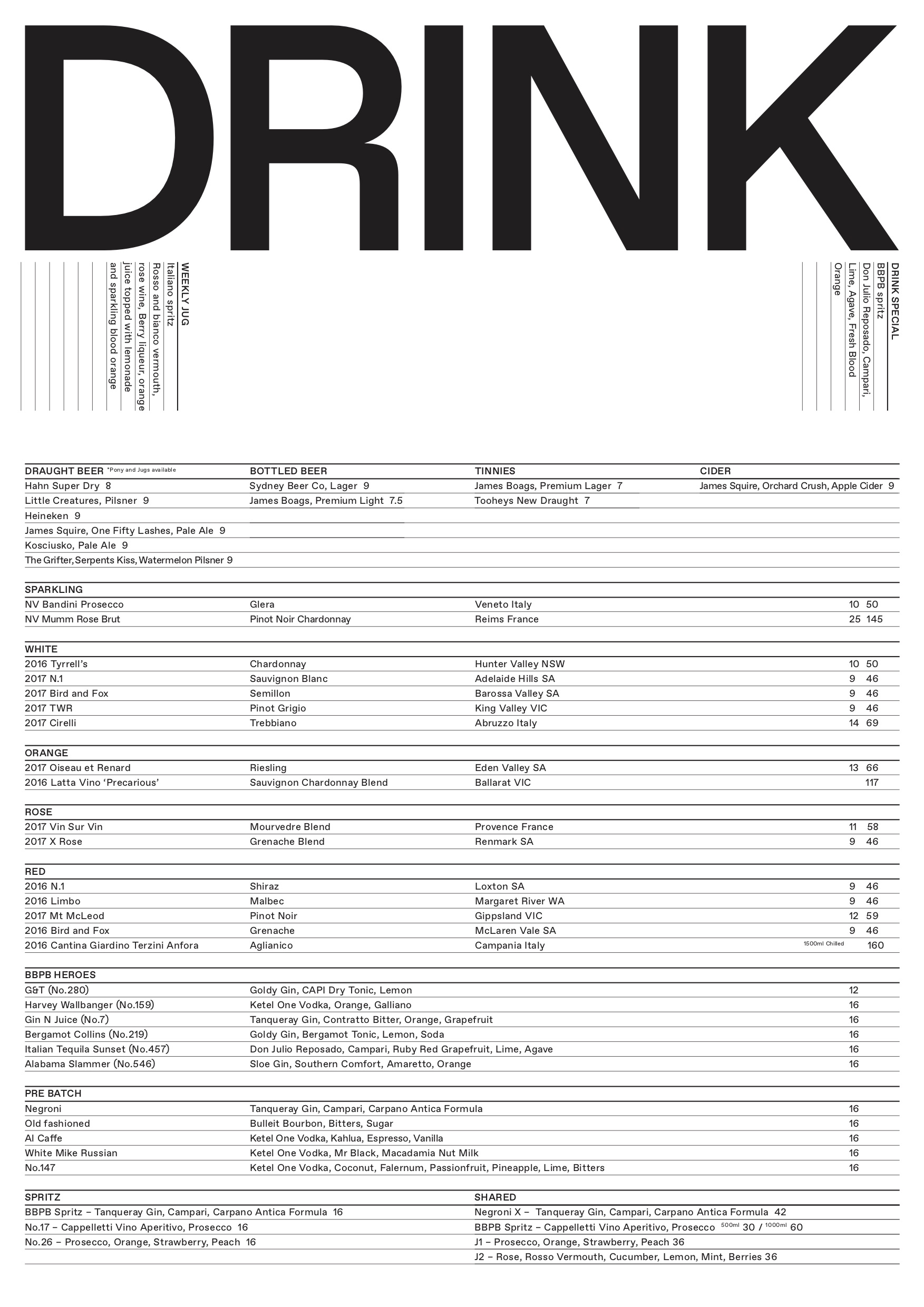 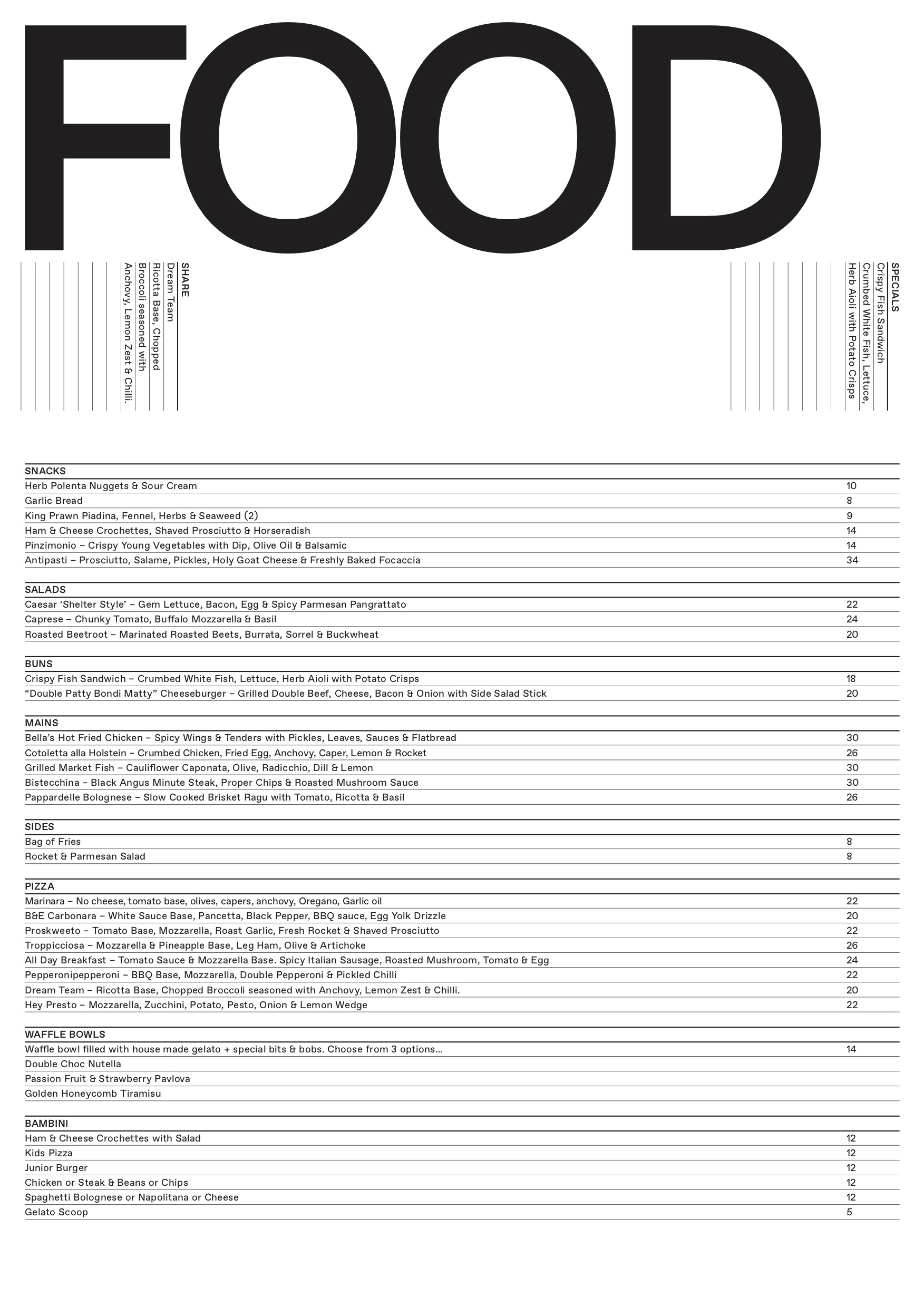 0
Australian Bartender December 13, 2017
No Comments Yet