“The idea this time was to cut as much of it live as we could, and not labor over polishing and overdubbing in the usual big-rock manner.” That’s a quote from Sonic Youth, on the recording of their 1994 album Experimental Jet Set, Trash and No Star, but it could just as equally apply to the ethos of Trash Tiki.

Trash Tiki is the work of duo Kelsey Ramage and Iain Griffiths — two bartenders, both of whom have influential London bar, Dandelyan, on their resume. Trash Tiki is an anti-waste popup that they’ve been taking around the world, and taking that message for bartenders and the public and “shoving it down their throats,” in the words of Griffiths.

There’s two schools of confrontational punk: you’ve got the whole never-before-picked-up-an-instrument school of LA’s The Germs; then you’ve got later bands like the aforementioned Sonic Youth, who push their skills and really make some fucking noise.

Trash Tiki falls into the latter category. The guys have obviously got technique and can play their instruments. It’s just that they’re doing things in a Lo-Fi, DIY experimental way — one that can lead as much to spectacular failure as it can to genius.

“Quite frankly, when we started the drinks fucking sucked,” says Griffiths, when we catch him prepping the drinks for their Sydney popup at Ramblin’ Rascal Tavern. It’s an hour and fifteen minutes to go until they open the doors, and they’re up to their elbows in pre-batched drinks and still finessing the balance of the drinks on tonight’s menu.

“We’re still unclear how much strawberry we’ll actually have tonight, it’s still straining in-between the barstool over there,” Griffiths says to Ramage as their finalising the specs on one of the night’s drinks.

This isn’t unusual for them.

“We have two weeks fucking lead up to this and we’re still balancing drinks in the two hours before we open,” Ramage says.

“It’d be boring if it wasn’t, it’s fucking punk rock — it’s meant to be fun and different,” says Griffiths. 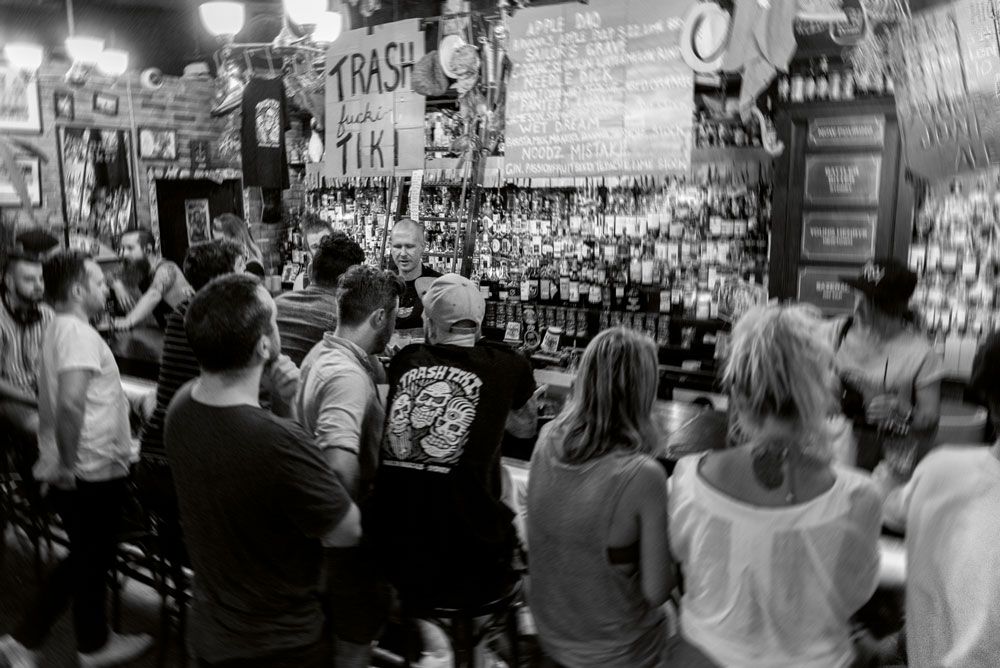 As of tonight, Ramage and Griffiths have been on the road for six months, taking in 40 cities and doing popups in 24 of them.

“We’re based out of 23 kilos of luggage right now,” Ramage says.

But tonight is the first popup in a tour of Australia for Trash Tiki, and it’s a homecoming of sorts for Griffiths, who was born in Queensland and has worked at Eau de Vie and Black Pearl. Tomorrow, they take the show to his hometown of Brisbane.

“Everyone’s been excited about it, which has been awesome,” Griffiths says. “We never really talked about how much this does seem to plug into the Australian DNA and style of drinking a little bit more. Even putting on our playlist and music a few times, the reaction’s been way better. We’ve done some venues [in other countries] where we’ve been playing the music and the owners are walking through going, ‘Is this what I fucking signed up for?’”

The year 2017 will go down as a pivotal year for this anti-waste message — the year that using trash to make tasty drinks broke through. Elements of sustainability have been creeping into bar menus for a few years now, often in cocktail bars that are little more high-concept — bars like Dandelyan. Griffiths says that they wanted to rail against that idea, that going anti-waste is something that can be achieved in any bar, anywhere.

“We knew that we wanted to step away from what we helped create at the Lyan company,” he says. Sustainability was thought of as something that wasn’t for everybody, just the top end elite bars. 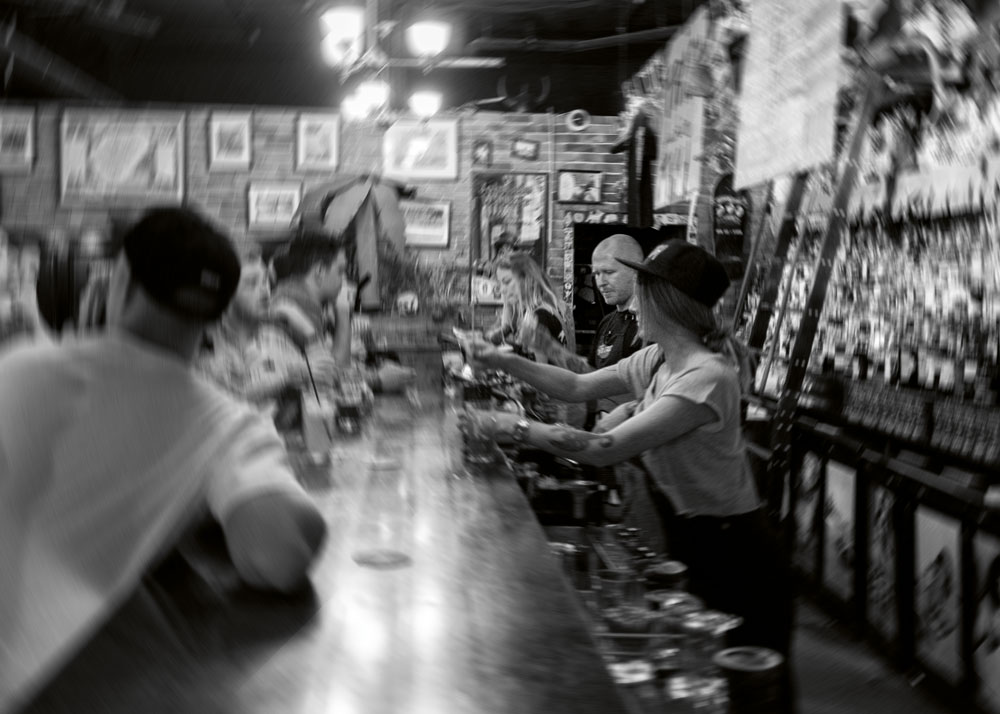 “It was becoming like the molecular thing, that was like a trend you just do for two years if you can afford $15,000 worth of equipment,” says Griffiths. “But it’s literally just, put shit in a bucket and then wait overnight, and usually it’s good to go the next day.”

That’s where the punk rock ethos comes into play. Punk is about as democratic as you get — all you need is some rudimentary power chords and something to yell about and away you fucking go. And it’s a perfect tie-in for Ramage and Griffiths.

“It was never something we actually spoke about that much,” Griffiths says. “It was one of those weird things: people ask us why did we choose punk, and we didn’t — we already fucking were.”

The tiki side of the equation comes from their own inclination towards tiki drinks: much of the tiki-style drinks on the Dandelyan menu came from them. But is punk really that tiki?

“We did get a lot of flak when we first started out about how we’re not tiki; you know, if you fucking don’t have a chick in a hula skirt and fucking grass in your bar you’re not a tiki bar,” Ramage says. “So we told them to fuck off and we just did our own thing.” 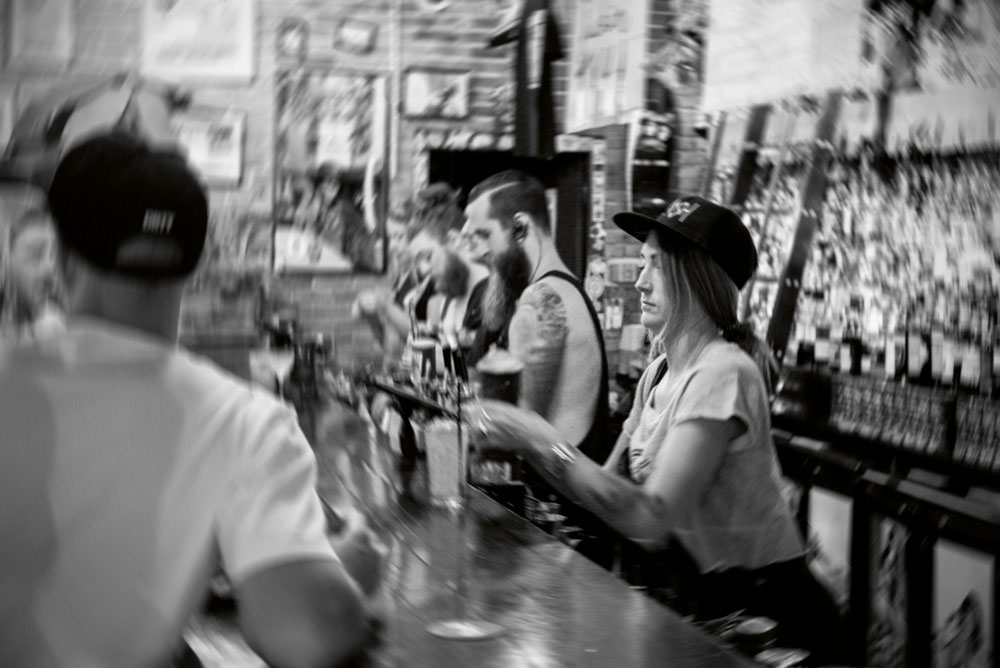 Like the punk bands with the most resonance, Trash Tiki has something urgent to say — whether that’s about the way bartenders approach their trade, or the way the big spirit companies do their sustainability thing. And they want them to address the term sustainability.

“It’s used by marketing companies, that’s the problem,” Ramage says. “Especially at Dandelyan, you’re sitting at a tasting and you hear this: ‘It’s really sustainable, and it’s okay to put it in your drinks because it’s sustainable.” But what does that mean? What are you doing, actually?

“We wanted to give bartenders a different way of talking about it. You’re not zero-waste, because that’s fucking impossible in a bar anyway; everything is packaged because it’s a legal drug,” she says.

“That’s the one thing that everyone needs to stop using, is the word zero-waste,” says Griffiths. “It’s a complete fucking fallacy. We’re lucky enough to deal a legal drug, and with that comes an aspect of respecting that, and it needs to go in a certain packaging and it needs to have certain laws around it. To abolish all of that would be to hopefully one day be zero-waste, but it would fuck everything else up in the meantime.”

Instead, the term they’re pushing is anti-waste.

Find Trash Tiki on Instagram (they’re @trashtiki, by the way) and you’ll find this tagline in their bio: “Anti-Waste Drinks That Taste Ok & Don’t Fuck The Planet.” You’ll note that they’re not making big promises for their experimental drinks.

“Anyone who bought drinks at those first few popups, we’re just like thank you, thank you and sorry,” says Griffiths. The first time round, they admit their drinks weren’t all great, and people who knew them from Dandelyan were expecting something other than what they got.

“People were coming in for something very high concept,” says Griffiths. “We were still figuring it out, we were learning as we went. A lot of people came in seeing us as Dandelyan and that kind of thing, and they were expecting something a lot more high concept than it is.”

So they’ve embraced the, ‘drinks that taste ok’ mantle, and throw it down as a challenge to the bartenders.

“As we always say, if you try our drinks and you think you can do better go and fucking do it — that’s the point,” Griffiths says. “Push forward, take our recipes, and go, ‘And yeah, but I reckon I’m better,’ which most bartenders do — ego’s a necessity to be a professional in our industry. So take that and embrace that and charge forward.”

“We usually come up with the menu a week or two prior to the popup, because we have an idea of what kind waste we’re going to get.”

Tonight they’re experimenting with a new technique, for the Wet Dream.

“Instead of using milk to fatwash the Maker’s Mark, we’re using barista milk because the heat makes it separate and it can’t be used again so it gets chucked out,” explains Ramage. “But it’s really good for fat washing because the particles are already starting to split.”

They’ve pulled in trash from bars all over town: The Baxter Inn has given them a Saturday night’s worth of unjuiced (and zested) oranges; Merivale has supplied them with pineapple skins (from which they’ve made tepache); whey from Three Blue Ducks; and they’ve picked up watermelon rind, too, which they’ve soaked in sugar to create an oleo-saccharum: “We soak [them] in oleo, you soak in sugar overnight and give it a bit the next day, and it comes out super rich and watermelon and green.”

Then 6pm rolls around. The doors are still closed. Like any gig, the doors open a few minutes late, but inside Ramblin’ Rascal Tavern the detritus of setup has been squared away, tonight’s menu slung high above the bar, and Ramage and Griffiths are ready for the onslaught.

If you’re in Melbourne, you can catch Trash Tiki’s takeover of The Beaufort — The Trashfort — until February 3rd. Find out more here.

Under cover of COVID, Kurtis Bosley worries our focus on sustainability has waned

Inside the creative process at the world’s number one bar, Dandelyan