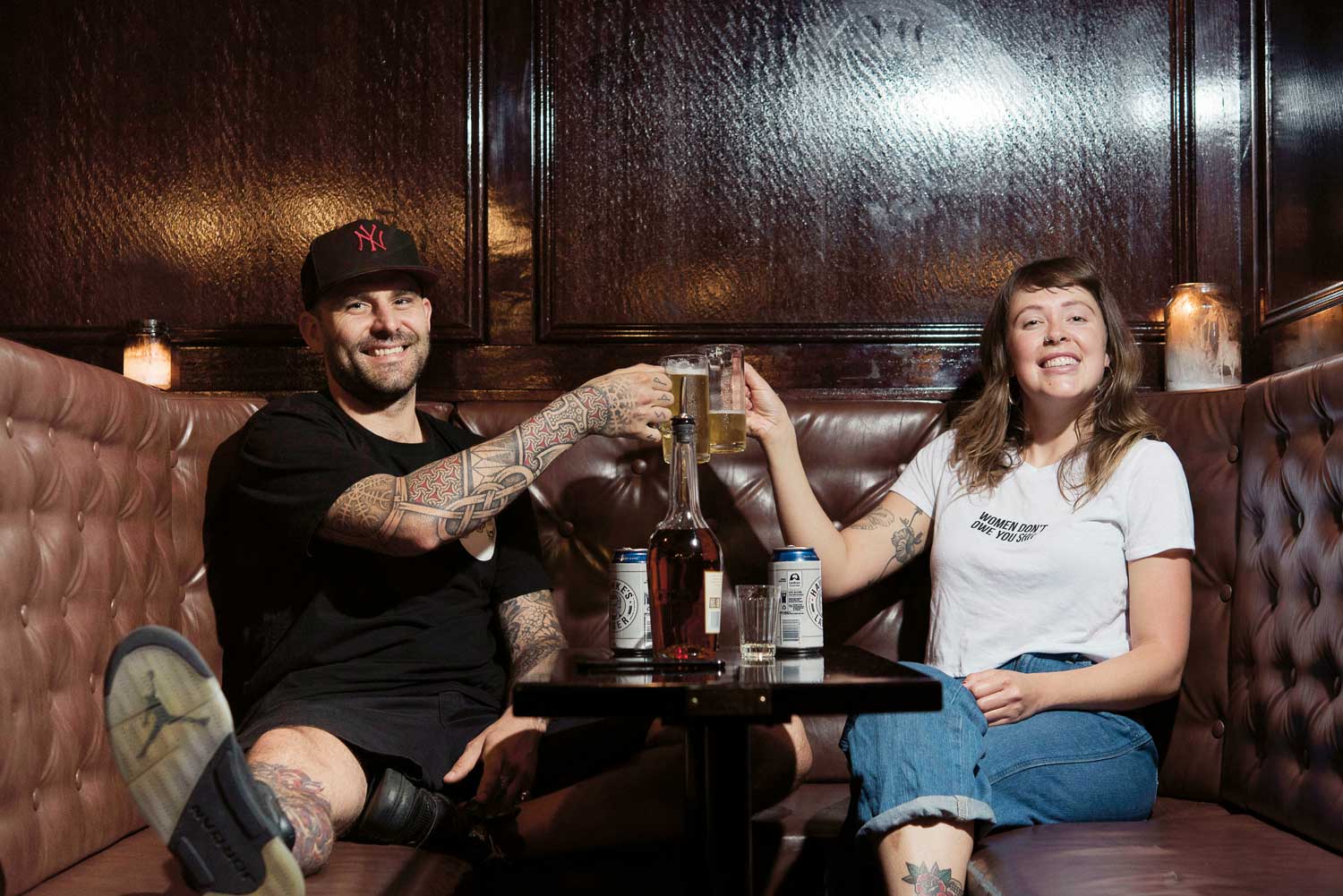 “She came up through the ranks, and has showed initiative and enthusiasm for the industry,” says Dardan about his choice for this interview. McDonald can be found at Earl’s Juke Joint in Newtown these days. “She’s just such a wonderful personality, and fun to talk to. She’s one of the crew I was managing back in the day at Frankie’s, but she’s gone further with it and moved forward, and is now the 2IC at Earl’s Juke Joint in Newtown. ”

Check out their chat below.

How did we meet? It was Frankie’s.

I started working there and you were my boss.

Was that your first hospo job?

No I worked at The Local Taphouse before that.

Did you work for your brother, Jordan McDonald, there too?

Ha, so you just followed your brother around!

He is pretty cool.

Yeah he wasn’t actually a boss there, he’d just worked there long enough to have assumed the role of authority. I need a job, because I was 19 and had just come back from travelling. Then I was working around the corner from Frankie’s, and I’d saw how cool that was, and thought it obviously suits me way better. He was on tour, and I messaged Phil [Gannon] and said please don’t take into consideration that I’m his sister. And then I met you! It was like the loosest time of my life. But I could not continue…

The hours were fucked. So you went straight to Earl’s after that?

Yeah I went travelling again, and then I went to Earl’s because I wanted to learn some more things now. Frankie’s is amazing and really fun, and there’s a lot to learn about booze, but at the end of the day you’re not really being pushed by the customers. You are by the managers, not the customers.

Its been over three years at Earl’s now.

That’s a long time in a bar.

Yeah it feels really strange, it feels like it was a different bar when I started there to what it is now.

What’s your role there?

Are you thinking this is the rest of your life kind of stuff, are you going to open up your own thing?

I don’t know, maybe? There’s so many different avenues you can go down. I’d like to do that, it would be hard to do that in this city at the moment, just cost-wise. But, one day maybe if I found the right place and the right people. I did study social work — I loved it. But I don’t see that as something I would like to do in this young period of my life. I’ll probably do that later. I’d also like to get into making beer.

Well you’re in the right area for that.

I’ve got a home-brew going on, I can’t wait.

Is this your your first one?

How would you describe Earl’s to someone who hasn’t been there? Earl’s, for me, it’s right across the road from my favourite restaurant but when I drink there — well, I’ve danced on that bar quite a few times.

Yeah, luckily for me you’re not usually actually drinking. What is Earl’s like? It’s hard, it’s such a big part of my life — it’s pretty groovy, not what you’d usually see in the Inner West area at all. It’s mainly pubs and chilled out spaces around here. Everyone’s relaxed, we have a really good team at Earl’s, also they really know what they’re doing and I run a tight ship (I hope). It’s really fun. The crowd is a little bit older now; it used to be, when it first opened, like any bar when it opens, it was pretty loose.

We had to stop people dancing on the bar because the fittings are like a $1,000 each.

Does that include staff and friends?

Except for Mardi Gras, we did that on Mardi Gras but we were very cautious. It’s a groovy Inner West crowd, the gay and lesbian power couples — I love it, it’s very progressive and a really loyal crowd. We’ve got amazing regulars that are there every night, and I think, how do you do it?

Are you going to get a journo job after this?

Hell no. I’m pretty happy with what I’m doing. What was it like working for me? Was there anything you got from me that you might put into practise?

Heaps of things! I genuinely think about this a fair bit because back when you were my manager, I was pretty young — 21 or 22. You guys seemed like so old and seasoned, all of you guys were obviously there for a reason — Anton and Jason wouldn’t have put you there if you weren’t the right people. You knew what you were doing, you worked really hard, you had a lot of fun. You were somebody I looked up to because you maintained a good relationship with the staff, I felt like we were good friends.

I was pretty fucking lucky though, that crew was amazing.

You also knew your shit when it came to booze, how to serve people, how to treat people, which is one of the things I really admired about Frankie’s. It was loose and wild but you also had to absolutely know what you were doing, otherwise you were out.

The Great Tinnie Blind Tasting: Which is the tinniest tin of them all?

Atlanta Pahulu: Ramblin’ Rascal Tavern’s newest up and comer on how hospo made her less of a robo

Ask Ramblin’ Rascal for a suggestion, and you’ll more than likely get a Flip in your face

‘You’ve got to influence people, you’ve got to sell them an idea.’ Phil Gannon on building a hospo career