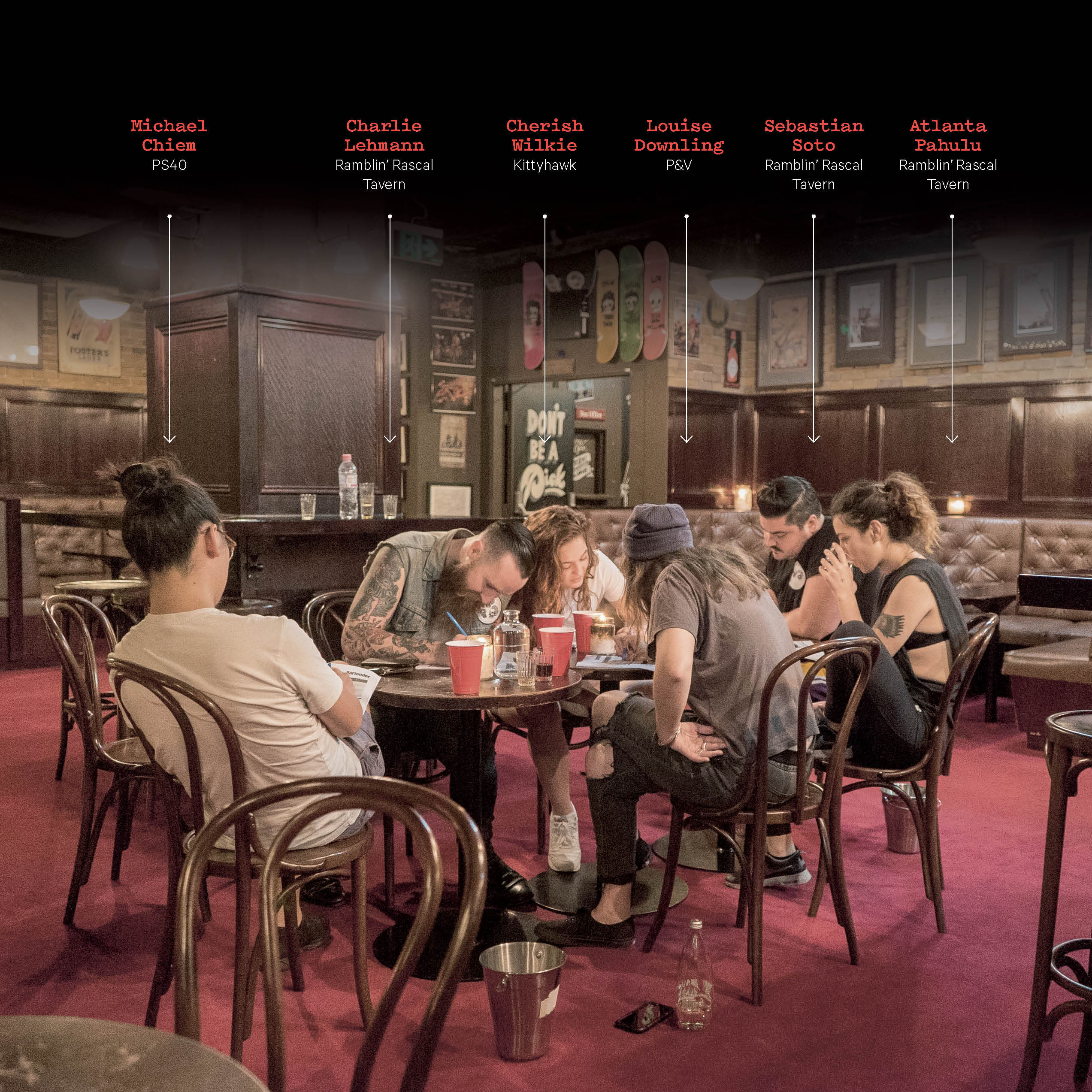 The Ramblin’ Rascal Tavern is the home of the great Shit Tinnie. A huge bucket of mainstream lagers en can has been a mainstay at the bar since they’ve opened, the workaday accompaniment to their other staple, a shot of fine cognac.

So it was no surprise that they wanted to taste test all the tinnies they could get their hands on for their takeover issue of Australian Bartender, and we were more than happy to oblige (it did mean an afternoon smashing beers, after all).

The only requirements we had for the tasting were these: the beers must come in the convenient can format, and the tasting could not include any IPA’s — co-owner Charlie Lehmann is on the record as an avowed avenger of the happiest styles of beer, and we wanted everyone to get along on the day.

So we grabbed as many tins as we could carry, and pilfered a few from their fridges, for a tasting of 15 top brews.

The top scorers on the day? From Yulli’s Brews, their Mediterranean Lager and their Norman Australian Ale, and from Marrickville’s Grifter Brewing Co, their Pale Ale. 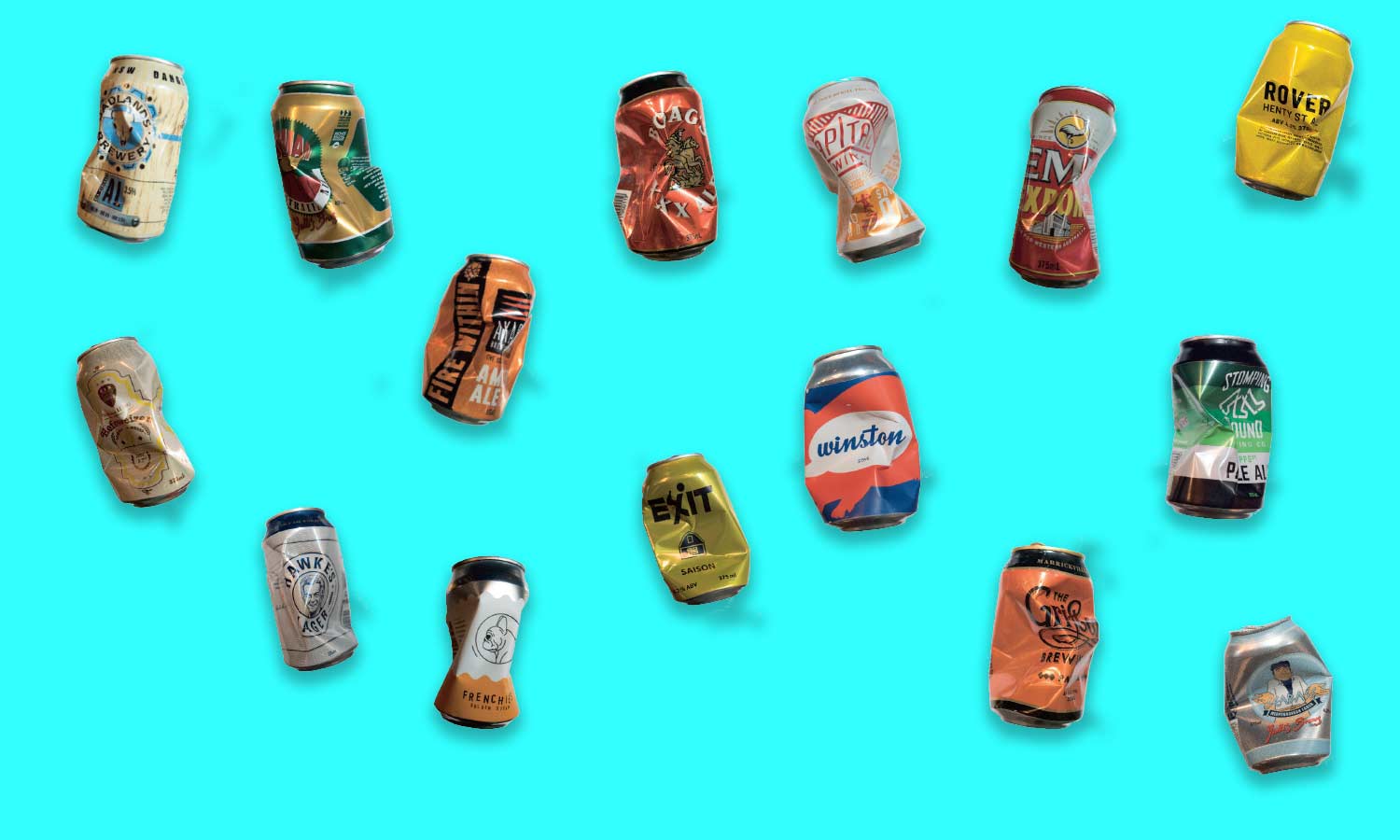 Six String Hefeweizen – 2 stars
The panel thought this can had a slight metallic note to it, and was watery on the palate yet with high drinkability on a hot day. Overall they were not impressed.

Frenchies Golden Steam – 2.5 stars
This crisp and easy drinking beer had a hoppy front palate, with a dry but short finish, the panel said.

Emu Export – 4 stars
This beer was a favourite, with a number of panel members wanting to smash more than a couple of these. Easygoing, with a good balance between hops and malt.

Exit Saison – 2 stars
Sweet and sour aromas on the nose, some banana characters, this beer did not impress the panel.

Badlands Brewery AL Mid Strength – 1 star
A floral character was evident on the nose of this beer, with some people liking it and the balance on the palate, others were not fans.

Akasha Fire Within Amber Ale – 4 stars
Hops and chocolate mole flavours were found in this beer, its creamy texture found quite a few fans.

Capital Brewing Summer Ale – 2 stars
A pronounced yeast character on the nose put off the panel, though a light floral and smooth palate, and a tangy finish redeemed it in the eyes of some.

Hawke’s Lager – 2 stars
A fruity aroma greeted the panel, it’s a full-flavoured beer that was described as suitable for drinking at the cricket.

Shenanigans Winston Pale Ale – 3 stars
A fruity, hoppy aroma, the beer was full flavoured on the palate with piney and bitter characters, not for everyone.

Yulli’s Brews Mediterranean Lager – 5 stars
Sour fruit notes on the nose, the palate was light , a touch bitter and hoppy and finishing long. Described as a sessionable tin, and one the panel thoroughly enjoyed.

Stomping Ground Pale Ale – 1 star
Most of the panel weren’t fans of this beer, with some turned off by the aroma.

The Grifter Brewing Co Pale Ale – 5 stars
Floral, hoppy, and sweet on the nose, the palate is very well balanced and described as a pale ale that they would “drink a lot”.

Hawkers Rover Henty St Ale – 2 stars
Tangy, sour notes on the nose, the panel simply were not fans of this beer.