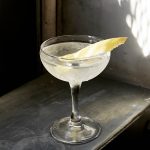 The Lifetime Ban is described in the Bartender’s Choice app as “a one way ticket out of Cooperstown,” we can only guess at the nefarious activities that inspired the name. “[It’s a] Martini that leans on fino and mint for fragrance,” says Ross. “We use Four Pillars Navy Strength to accent the bruised mint that is stirred in and strained off.”