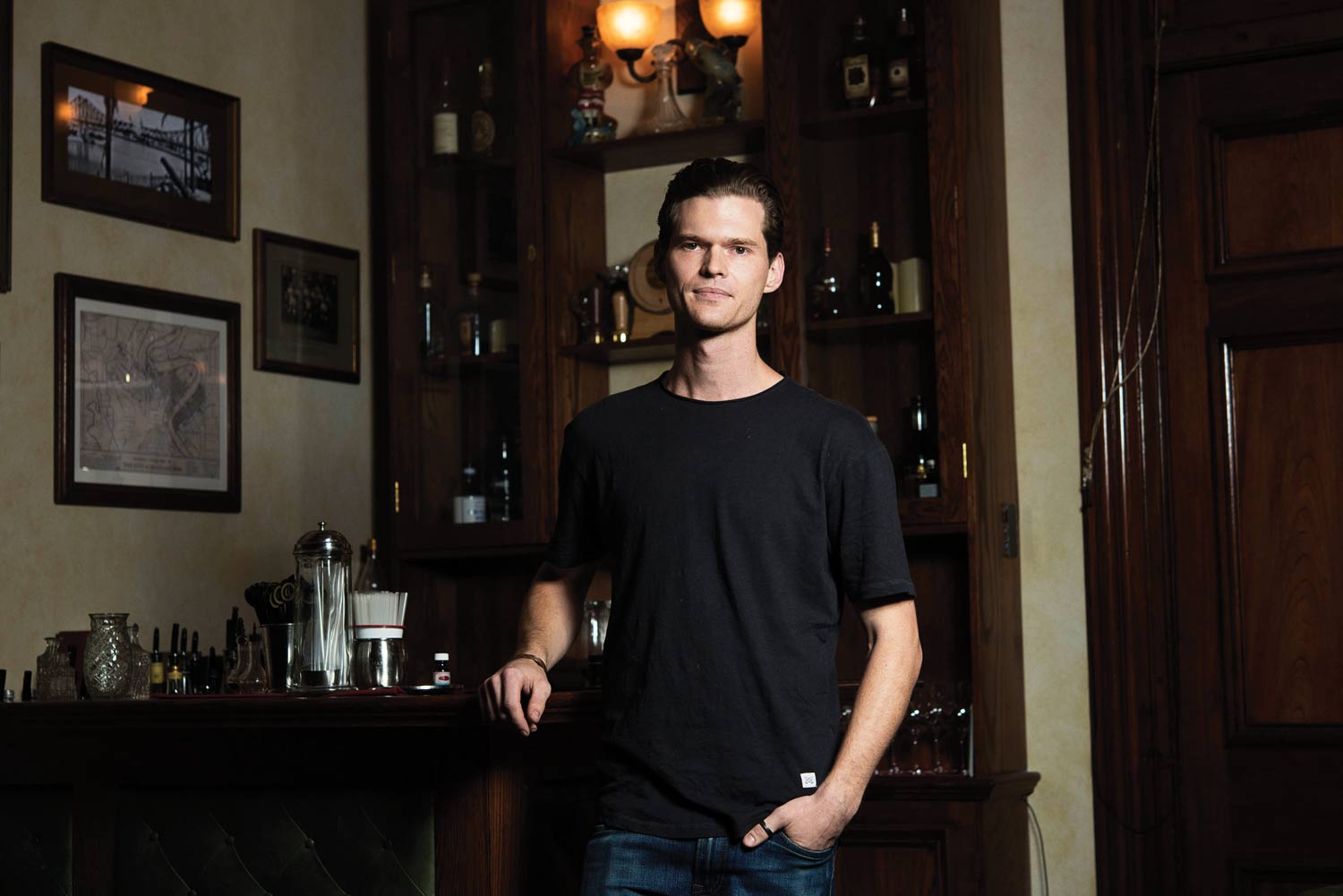 Don’t get me wrong – there’s a good chance that the only time you’ve ever heard my name or seen my face before was between these pages after I placed in the finals of some trumped up bartender competition. Maybe once, maybe twice… maybe five fucking times now. I’ve done more than enough in my time. Probably too much without a win under my belt, but that’s another article. I’m well versed in the culture, you could say. I’m a year past having pissed a decade up the wall getting people drunk, which means I’ve seen the big competitions from their infancy up to now, as well as all the little corner comps and sales incentives and brand activations and whatever else along the way.

I’ll preface the whole lot here by saying I don’t hate cocktail comps. Competitions are fantastic things for our industry: they give young guns an opportunity to apply some creativity to their job in an interesting outlet; they drive brand awareness and get products in hands for the folks that are sending the winner on that trip to Mexico or whatever; they bring together a national industry and show what we do in a very positive way, as opposed to the loud and frequent baby boomer opinion on how we’re facilitating alcohol fuelled violence. Better close it down and reduce trading hours, introduce scanners and sell off all the land to property developers to keep us safe… fuck that’s another article as well, huh.

Now, having said something nice about them, let’s start the snowball fight. Cocktail competitions are ruining bartenders. I’ve heard far too often over the past few years the phrase ‘competition bartender’. I know you know at least one person you’d describe as that, and if you can’t it’s probably you, so pay attention. A ‘competition bartender’ is someone who can place or come first in every other cocktail competition, but baulks at the work part of the job – serving drinks.  They’re probably the bartender with the bowtie (I’m pretty sure these are gender neutral now), maybe some suspenders or sleeve garters, ironic facial hair (even more ironic if it’s gender neutral) and the tickets on themselves. The one who doesn’t want to go clean the men’s room floor on a busy Friday night. The one that spits the dummy when they get told they’re on glassware, or worse, relegates themselves to doing glassware so they don’t have to deal with the patrons. The one that bails management up for another $5 per hour because they made it into the national finals, this year.  Sound familiar? ‘Competition Bartender’ is the term, but I’m sure anyone of my vintage or thereabouts collectively refer to them as ‘Fuckwits’.

Your job if you’re a bartender is to tend a bar. Nowhere in the job description does it say ‘entitled to extra benefits and easier workload if doing well in competitions this season’. Competitions are wonderful things for you as a bartender. They help you develop and build a profile in the industry (this guy, five times Bartender of the Year finalist – it works).  That’s it. That’s the fucking reward, not a victory lap around the scene on a high horse. I have literally had potential staff ask me how I’m going to help them succeed in competitions during a job interview. In this circumstance, I helped them by showing them how much tenacity and determination it takes to win a comp by encouraging them to continue their search for work elsewhere.

Fuck that guy. Seriously – don’t be that guy.

Obviously the core of this article is the advent of the fuckwit bartender, and there is a firm place we can plant the flag and point the finger of blame for the existence of that fuckwit, and that’s booze brands and cocktail comps. Anyone that’s been around since Simon McGoram was the editor of Australian Bartender will remember a time when there was a comp on maybe twice or three times a year. Occasionally there’d be a random brand-specific competition that would slip through the cracks, but mostly it was Bartender of the Year. I know in Brizzy we had the old Liquid Arts comp (a fun, non-brand affiliated competition that ran at the old Fringe Bar) and Melbourne had Iron Bartender for a few years. Rematch Beeyatch as well, remember? But these were little local comps that were put on as a bit of fun by bartenders for the industry. We hit critical mass a while ago with brand-driven cocktail comps.

A cocktail comp is an attractive idea for a liquor brand. Great reach and engagement across the nation, listings and sales in bars as bartenders are forced to sell their cocktail creations – don’t even have to send a sales rep in, they’ll buy the products themselves for a chance to fly to Sydney to compete in the final. Hell, just the visibility alone a cocktail comp menu will provide makes it worth the 20k investment from the brand teams. The unfortunate thing is brands figured that out and started hosting cocktail comps at every opportunity. Suddenly a cocktail comp wasn’t about getting some young bartender to try their hand at making some drinks on a stage in front of some mates for the chance at a bottle of booze and became rockstar treatment, and that’s the booze brands fault.

Now there are bartenders who were in fucking high-school three years ago strutting around like a peacock because they won the Schlitz Rum Staquiri Throwdown and got an all expenses trip, with spending money, to Bolivia to see the distillery.

If you’ve ever noticed, the term ‘rockstar’ shift only popped up a few years ago. About the time that these fuckwits started advertising their services on the MBE or BBN – I’m free to work on Saturday night, won’t close, have shit chat, want $30 an hour and I’ll be hammered before the end of the night – pretty sure you all know who I blame for that shit as well.

Young competition bartenders winning finals raises another very interesting point about cocktail bartending – a bartender’s ability to throw together some interesting flavours and a whizz-bang technique comes from time and experience. There might be a few anomalies, but it takes time to become good at what we do, and that’s merely one element of our job. Despite my recent social media adventures, I wholly respect the amount of skill that some of our industry colleagues have when it comes to assembling a drink for a comp.

What gets my goat is the fact that it’s just one part of what we do, and it’s being lauded as the pinnacle of our career. If you can’t stand behind a bar for 10 hour stints, crank out cocktails in fifth-gear, smile and chat and generally ensure your patrons are having a bunch of sex once they leave the venue – you’re not bartending.

Go and spend the time working in a pub to learn how to engage people sitting at the bar top. Go and work in fine dining to learn more about wine service and food pairing. Get a job in a hotel and learn how much it sucks ticking off boxes on a clipboard of checklists and dealing with requisition forms. At the very least get a job in a nightclub and learn how to pound out drinks at top speed without losing your cool.

These are things that make a great bartender, getting through to a comp final is a drop in the ocean in terms of experience that you’ll need if you every truly want to be great.

So lose the attitude, drop the fucking bowtie, put your head down and make some fucking drinks. Maybe, just maybe, in a decade or so you can be a salty old bastard like me, but at the very least you’ll be a peer among your equals who has earned that respect. Be a Quen Van Ngyuen, or a Mikey Enright, or a Jason Crawley – don’t be a fuckwit.

The views expressed in this story are those of the respective contributor and are not necessarily shared by Australian Bartender.

A cheatsheet to American whiskey (and 6 great bottles)

Here’s how they make the Old Fashioned at The Gresham

The Gresham’s brothers in booze: Kal Moore by Magnus Moore