It takes hard work to get a new gin brand going in Australia. You’ve got regulations to contend with and accomodate, you’ve got to pay the taxman handsomely, and then you’ve got to make something that’s going to stand out and do well in an era of a thousand gin brands.

Can you tell us how Prohibition Liquor Co. came to be?
A couple of mates who had met when we worked together decided it would be great to do a “project” together. After a few different iterations of what that may be – (some of which are coming true at our new Tasting Room – like making the best Cheese Toasties on earth!) – As soon as Wes mentioned Gin, I was immediately on board. From there it was a process of tasting a lot of gin – to work out what it was we wanted to create which was different. A chance encounter with Brendan Carter from Applewood Distillery was what kicked us into high gear almost immediately. But I still run my branding firm, Wes still has a busy management role in a large company, we juggle this business with a small a passionate team and hope to grow from here.

How long did it take you to go from idea, to the finished product?
We decided to start this project early in 2015. There were a few months of tasting and researching spirit, designing packaging, researching stills and speaking with manufacturers from Australia to Europe to the US, before we met with Applewood. From that moment the entire project hit the accelerator. Licence approvals, ordering packaging and labels, working with the Carters on the flavour profile and experimental batches, tweaking and adjusting botanicals to get the spirit itself to the best we could all make it. Six months later, we had spirit in bottles, boxed and ready. Wes and I walked into our first bar to introduce the spirit – we met with Marcus from Hains & Co in Adelaide. That day was the first of December 2015 – it’s been like a rocket ride since then!

Tell us about your plans for the distillery door?
After months of renovating and fitting out an old mechanic’s workshop which was most recently a Cross Fit gym in the Adelaide CBD, we have Adelaide’s first “Distillery” door and Tasting Room, representing craft spirits from all over Australia, in a true Cellar Door style experience. What we are missing is The Still – the next huge piece in the puzzle. We plan to continue the great creative and working relationship we have with Brendan and Laura at Applewood, but having our own Still to create new recipes, small batches and supplement production is a crucial step. We have the space ready and are in discussions with Still manufacturers all over the world to help create the final piece of the Prohibition vision. From there a substantial increase in exports is the next focus, with markets including Singapore, Hong Kong, Vietnam, Europe and the US – many of which we have already established connections and just need the capacity. It’s going to continue to be an exciting year for us. 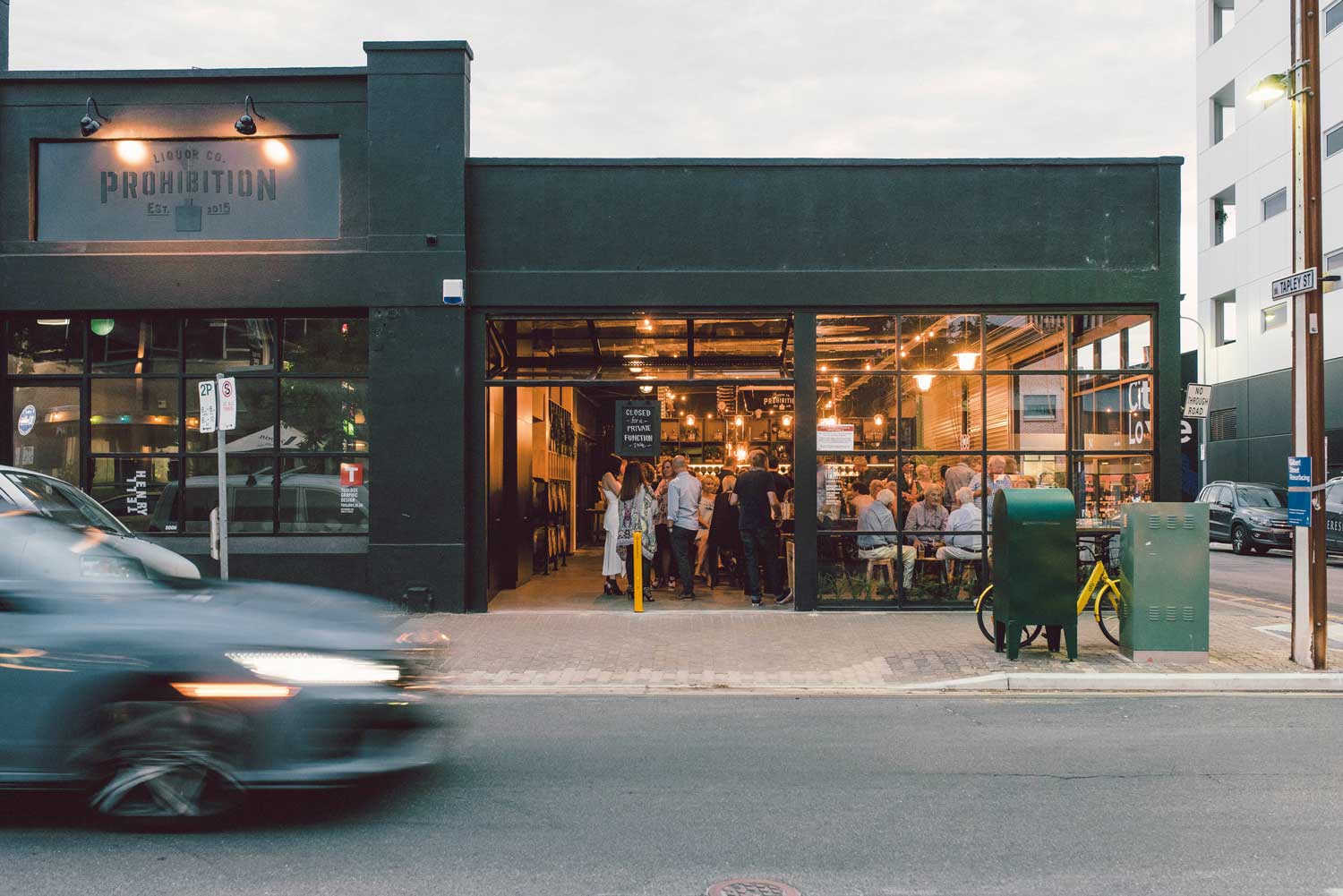 Where’s next for the Australian craft spirits industry? I see it getting more competitive in the short-term, with many people thinking they can throw their hat in the ring and the barriers to entry seeming lower all the time. But there will as with any market be an adjustment at some stage. The market cannot carry an over-saturation for too long if it is not a highly profitable model — which it’s not. So we will see brands come and go, which is unfortunate, but natural. The ones who stay will be the ones with the grit to push through the struggles, which happen daily — especially as you grow — but I guess the craft beer industry has been through the same journey we are on. Some of the strong brands will be purchased by the big multinationals, in a push to increase share in a fast growing sector, but they will have to have a strong brand and market potential to achieve this — it will be an interesting next five years I think. I strongly believe Australia will become a global superpower in craft spirits. We have everything we need to do it — yes, proximity to the rest of the world is tricky, but it works in the wine industry — we have the best climate, cleanest environments and access to resources to create some of the best gins, whiskies and other spirits in the world and the awards coming thick and fast to prove it. Just last week Prohibition simultaneously picked up gold medals in Tasting Australia in Adelaide and San Francisco World Spirits Competition, making over 20 international awards in two years and an unblemished 100% hit rate (touch wood) for every awards program we have entered across the globe. The only way for Australian spirits is up!

Any advice on starting your own spirits brand?
The three points I am going to float here will seem pretty straightforward, but the difference between saying them actually living them is huge.

A strong, singular vision and idea for what you want to create is essential. Have a story for the spirit and the brand, build this story into a narrative which everyone in the organisation can follow. It is not just a product you are selling it is a story — your story, the spirit’s story and the brand’s story need to all be interconnected and authentic.

Part B of the first point is differentiation. Without a clear point of difference in regards to help shelf presence and flavour profile you have no reason to exist — work hard on both, it will pay dividends.

Also, know your market in this respect. There is no point creating something that is so different that it only appeals to one percent of the market, in Australia anyway. It has to be different, but with a consumer in mind.

Have a passion for what you are doing and don’t expect to get rich. If you are not entering the industry with a burning passion for the project and the product you are creating, you can’t expect anyone else to have a passion for it. And unfortunately, with the tax we pay in Australia on every millilitre of spirit being one of the highest in the world, it is always going to be hard to make money.

If anyone asks me, I always say “the most expensive gin I have ever consumed is my own”, as you have to be willing to keep tipping money into it — but the passion only gets stronger!