The Irish coffee recipe you’ll find at New York’s Dead Rabbit is about as good as you’ll find anywhere, and back in July Sydney’s The Duke of Clarence adopted their recipe for use, too.

“We had Jillian Vose, the Dead Rabbit beverage director, come through last month and guide us through the famed Irish coffee,” says general manager David Nguyen-Luu.

“It is a simple drink, but you can stuff it up as such. This is purely demerara syrup, Tullamore D.E.W. whiskey, filter coffee and whipped cream,” he says.

But with simple drinks, it’s how you prepare them that matters most, and Nguyen-Luu picked up some great tips from Vose.

“The whipped cream is a very vital factor of it — [Vose] has specified a certain fat percentage whipped cream, the coffee blend has to be a nice mild blend, and the demerara syrup must be at 2:1,” he says.

You’ve also got to get the amount of whiskey just right, he says.

“Tullamore D.E.W. goes fantastically in it. A lot of people have different specs, whether it’s a 30ml or 45ml — this is actually a 35ml pour and that extra five millilitres does make a massive difference, and the flavours of Tullamore really come through and shine,” says Nguyen-Luu.

The secret trick to the Dead Rabbit version, however, is temperature.

“The temperature of the coffee is very important,” says Nguyen-Luu. “We follow Dead Rabbit’s, and they specifically go for 78.5 degrees Celsius for the coffee. Irish Coffee has a great balance between the different textures of it — the mix of the hot and cold elements work really well. It’s why this is such a smooth drink. The cream has to be absolutely ice cold, and then the coffee at 78.5 degrees. We’ve got a little water bath circulator that we set at that temperature, so it’s the same temperature every day.” 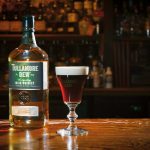 Recipe from New York’s Dead Rabbit and adapted by The Duke of Clarence.

Use a filter coffee that is a mild blend and not too over powering – ie espresso is too strong for it and will drown out the whiskey, too weak and you’ll get nothing. Grind of the coffee should be coarse like black pepper.