The newest distillery from William Grant & Sons, Ailsa Bay, is something special.

As a bartender, you know that distilling is a scientific process; an array of testing and research goes into the world’s most well-known spirit brands, and there’s nothing wrong that. But when those bottles are released to the public, you never hear them speak about the science behind them.

But Ailsa Bay doesn’t run away from the science. In fact, in the pursuit of a new whisky that is worthy of sitting in the William Grant & Sons portfolio, Ailsa Bay has created new data-driven processes to refine the craft they’ve perfected over nearly 150 years just that little bit further.

The Ailsa Bay distillery, set in Girvan in Scotland, is all about precision distilling, with the aim being to create a number of different single malt styles, to give the company as much flexibility as possible.

The first single malt from the distillery is the Ailsa Bay Release 1.2 Sweet Smoke, and to craft it they’ve put in place some special data-driven techniques.

PPPM & SPPM
Ailsa Bay is the only single malt to be assessed by both peat parts per million (PPPM) — that is the phenol levels in the whisky — and by a new measure developed by Malt Master Brian Kinsman, sweet parts per million (SPPM), which is the precise measure measurement of sweet levels in the whisky. But here’s the revolutionary thing about SPPM: it’s not measuring sweetness as in sugar, as a Brix-style measure might do — you know there isn’t any sugar in distilled whisky. What SPPM measures, however, is the oak-derived compounds that are responsible for the perceived sweetness of a whisky. This is a first, and affords a precise balance between smoke and sweetness in the final malt.

MICRO MATURATION
You’ve heard of cask finishing, right? It’s the process where whisky is finished with an ageing period in barrels that have held another spirit or a wine like sherry — and one that was pioneered by William Grant & Sons over the last 30-odd years. Well, Malt Master Brian Kinsman has flipped that on its head for Ailsa Bay — the result is a process called cask starting. The new make spirit goes into small ex-Hudson Baby Bourbon barrels of between 25 and 100 litres for a period of one to three years, before going into either first fill American oak, virgin American oak, or refill American oak casks for ageing, giving the final whisky more complexity.

PRECISION DISTILLING
It begins with the milling and mashing of the barley — Ailsa Bay does this at the distillery, using a slow extraction rate for pumping the wort slowly into the washback for a clearer result, which lends a biscuity and cereal-like character to the new make spirit. It’s a computer controlled and monitored process, giving the distillers exactly what they’re after. The fermentable sugars are converted to alcohol in a 48 hour period, but Ailsa Bay keeps the wash fermenting for another 20 hours to develop fruitier characters.

Then in the distillation itself, Malt Master Brian Kinsman fine tunes the rate of distillation, slowing it down, so that lighter, higher compounds come through earlier; to capture the heavier phenols in the spirit, Kinsman adjusts the reflux within the still; because there’s a risk of unwanted feints coming in without this precise control, Kinsman describes it as “distilling right on the edge.” 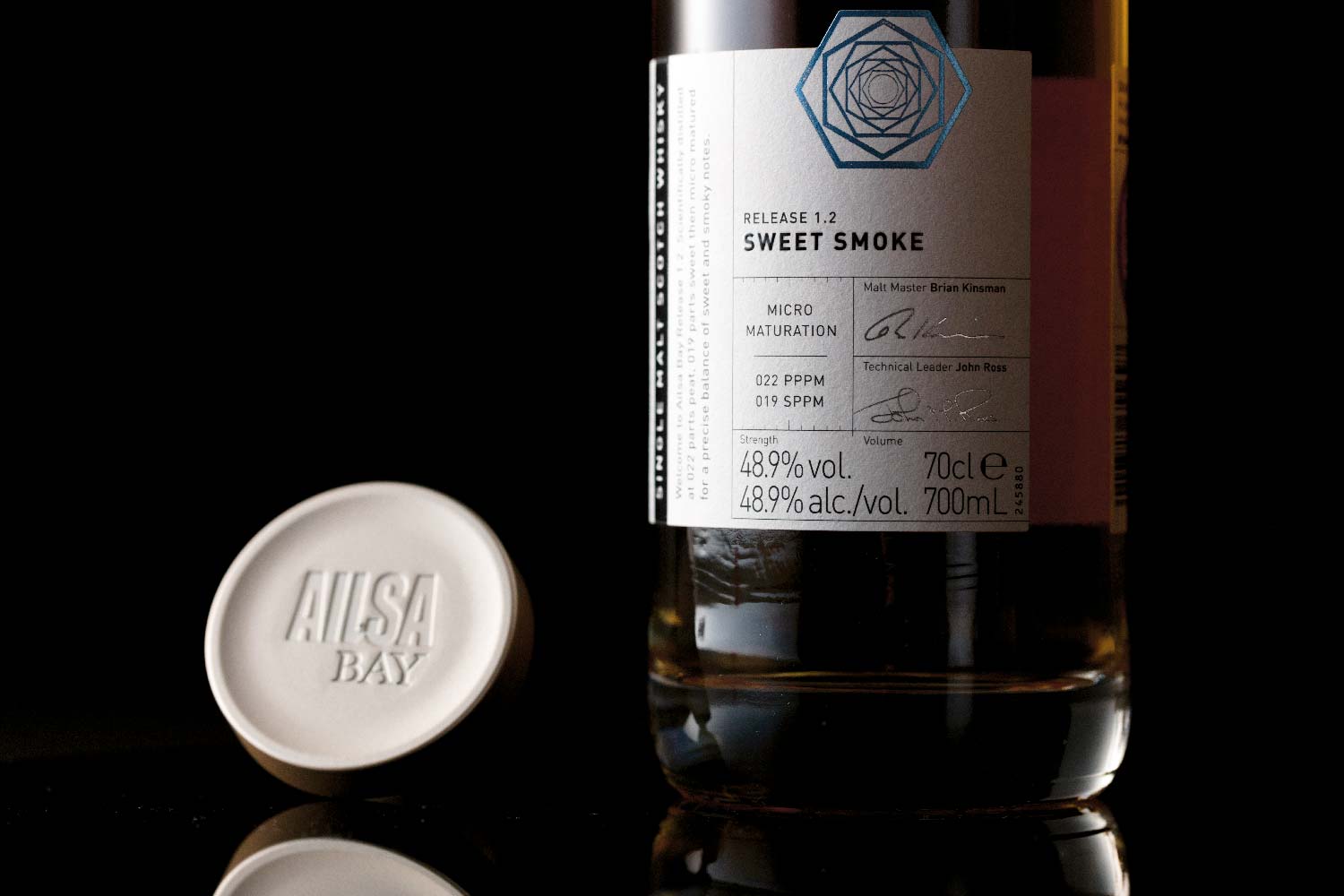 Tasting notes
Nose: Fresh wood smoke with notes of smouldering damp heather and an extinguished bonfire. Following the smoke is a wave of oaky sweetness and hot buttered toast with an intriguing hint of caramelised apple.
Taste: An immediate punch of peat is quickly balanced by a burst of vanilla oakiness. The flavour meanders between smoke, fruit, creamy toffee and back again. With every sip the complexity of the whisky deepens as layer upon layer of flavour is revealed.
Finish: An intriguing balance of oaky sweetness and peaty dryness.