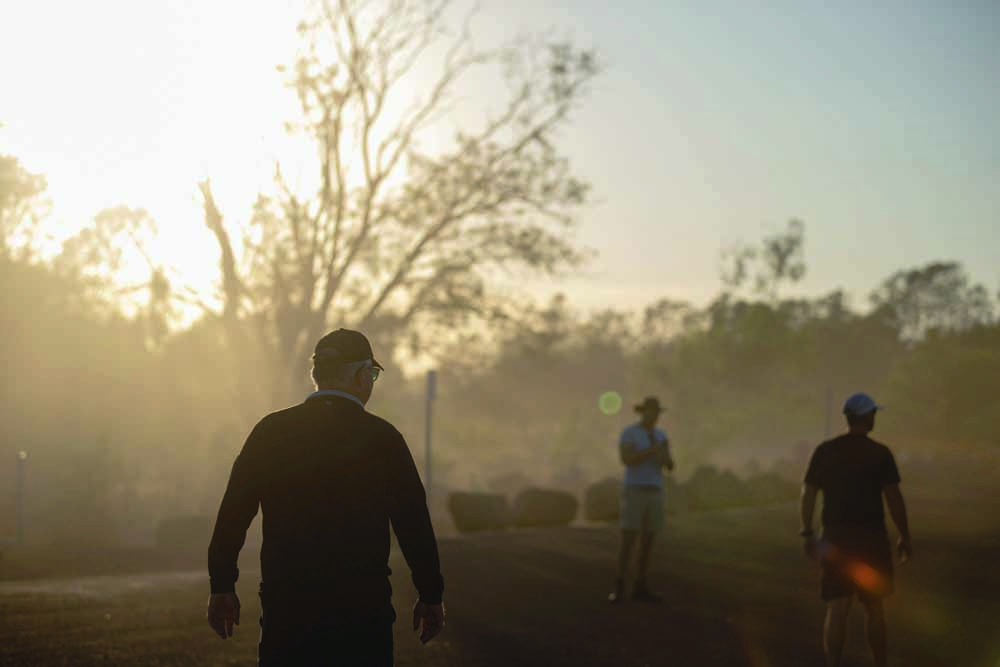 In August, somewhere deep in the heart of the Northern Territory, some 30 bartenders from across Australia assembled to swap stories, drink bourbon, and go into the wild for the launch of Wild Turkey Longbranch.

It was a one of a kind bartending trip: we’d spend the night at the Wildman Wilderness Lodge, with a dinner feast in the open air to come, but first we had some tasting to do.

We were gathered there for an intimate audience with bourbon distilling royalty — Wild Turkey’s Eddie Russell. 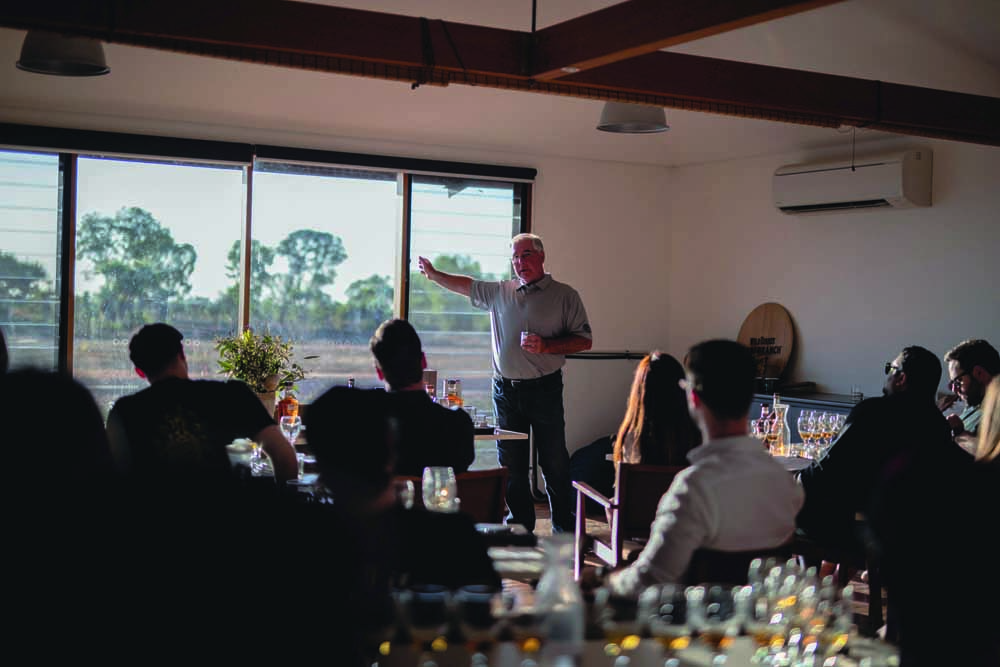 Russell has been the Wild Turkey master distiller since 2015 when he took on the job his father, the legendary Jimmy Russell, has held for more than 60 years. Jimmy is still at the distillery every day, says Eddie, but it’s down to Eddie to be responsible for putting out the new products in the Wild Turkey range, such as their latest release, Longbranch.

The bourbon landscape is different these days, he tells us as we begin our special tasting. And a large part of the way bourbon has changed is down to the way bartenders have been using it over the last 10 years.

“I grew up with all the master distillers — Booker Noe, Elmer T. Lee, Parker Beam and my dad were best friends,” Eddie tells us. “My dad thinks a mixed drink is when you put an ice cube in your whiskey — he says it makes the ice cube taste better. As I came along and got a little more in charge of things and did some research in bars — because that’s where you have to do your research — some of the big cities started making the Old Fashioneds and Manhattans again. This is 10 or 12 years ago, and really only in the big cities, but as they did, it started bringing a whole new group to bourbon and what bourbon is about,” he says. “Bourbon is the best it’s ever been. I finished my 37th year in June of making Wild Turkey — of actually getting paid to make Wild Turkey — and it’s changed so much.” 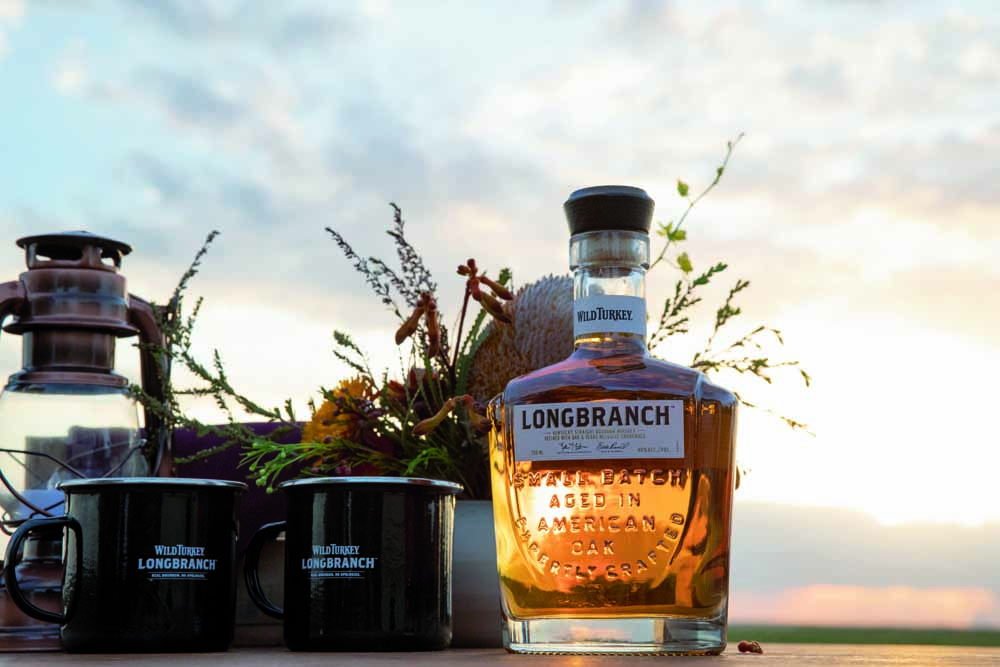 When we get to tasting the Longbranch for the first time, Eddie tells us that it was one of the more challenging whiskeys to create that he’s ever made.

“This is the hardest product I’ve ever done in my 37 years, because it wasn’t just me or Jimmy, this is something I did with Matthew McConaughey — now, he did not touch any of the whiskey until after it was made and aged. I sent him samples, it was the craziest thing I ever done,” he says.

The process was a long one, involving a lot of back and forth between Wild Turkey and the actor.

“We sent him between 40 and 50 samples, sending four samples at a time. Our top marketing people in the US asked him what were his thoughts, and he said, “I need Eddie’s email because I need to talk to him.” I got this message from him, and he starts every email with, “McConaughey here.”

That led to a lot of back and forth conversations as they tried to zero in on what they both hoped to achieve. 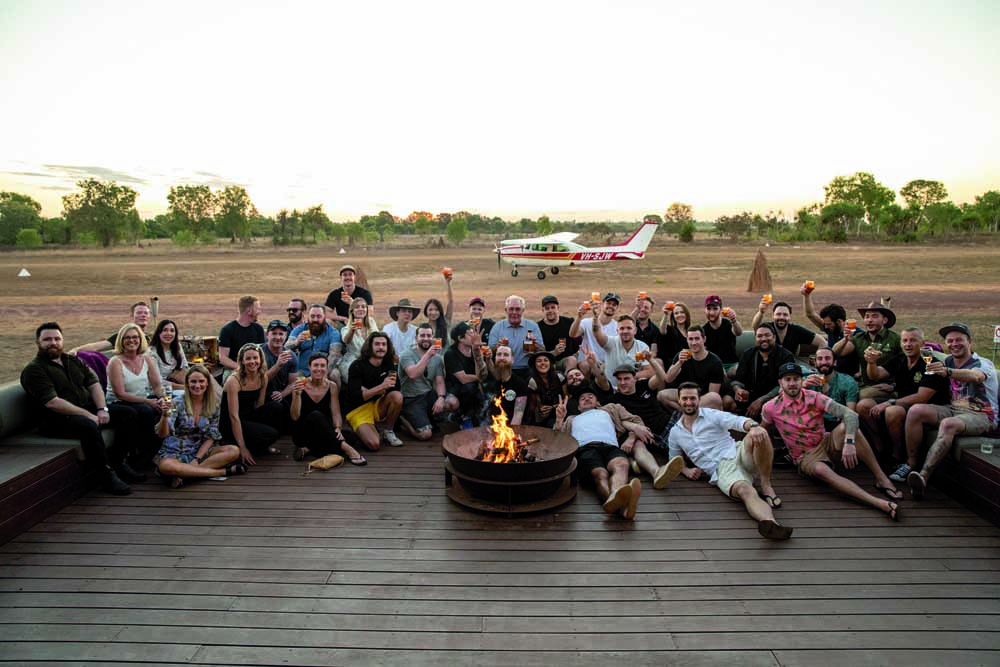 “What I wanted to do was to connect Texas with Kentucky,” Eddie says. “His mum and dad met and married at the University of Kentucky which is about 18 miles from me, then they went off to Texas. He’d talk about some river, and some road, and I’m like ‘No, no, no — when I think of Texas I think of mesquite wood.’ They barbecue — it’s beef down there, they use a lot of mesquite.

“It was a long process. I was using six year old bourbon, and I used mesquite charcoal to filter it through, it tasted like peaty scotch — really, really smoky. That’s not what I’m looking for,” he says.

So after a few errors, they got back to basics.

“What’s bourbon about?” Eddie asks us. “Well, bourbon’s about making a product that you put in white oak, and age it to give it flavours and colour. We decided we’d do the American oak first, what I call a teabag. It’s a big stainless steel container with holes in it. We put the whiskey in there and we run it through that American white oak, and what it does it takes some of those more astringent high notes out of the whiskey, it also sort of sets it up for that mesquite to come in there to give it a little bit of that smokiness, a little bit of sweetness, a bit of citrus that I get out of it. It’s a two and a half day process, I take that teabag and set the whiskey down in there. We did that, and we’re getting close.”

But there was one refinement which was going to take it from close, to perfect.
“The big change really was when I went from six year old to eight year old bourbon. It made the flavour better, it made the whole process better, and it also — even though my dad likes to think I don’t appreciate anything about him — it gets back to what my dad’s about, everything he did for a very long time.”

Happy with the result, he sent some samples of this latest batch to McConaughey.

“So I’m laying in bed one night and my cellphone starts ringing, and I’m like what the hell’s going on? It’s Matthew. He’s out with his brother in Texas and they’re drinking the samples, and they’d definitely had a lot to drink before they drank these samples. He said it was perfect. We went on to perfect it and that’s what ended up being Longbranch,” says Eddie.

There are some moments in life where you sit back, take in just what exactly is happening about you at that minute, and feel glad that you are where you are right now.

That afternoon, as the sun set, was one of those moments. It’s not every day, after all, that you get bourbon royalty sharing with you the inside story of how he made his latest bottle.

We left the tasting and headed to a dinner under the stars (and out there, in the middle of nowhere, there’s a lot of them). The bartenders did what bartenders do, telling tales (and probably a few lies), enjoying Longbranch. And in the morning we were up early, taking a ride out on a fan-powered boat across the wetlands nearby, on the look out for crocodiles and birdlife. We’d finish the day with another sunset at the Darwin Ski Club, making Longbranch Old Fashioned’s and telling more tales, making new friends, soaking up an experience we won’t forget.

5 American cocktails worth checking out

The rookies guide to bourbon and rye

Wrap your lips round a Whiskey Tango