If you were bartending between the mid-1990s and say, 2008 or so, there’s one cocktail you likely made more than any other.

And no, it wasn’t today’s ubiquitous Espresso Martini. It was the Cosmopolitan. You’d serve one over the bar and then the orders would come flooding in. In the stock rooms of bars all over the country there were 6-packs of the big glass Ocean Spray bottles stacked high, the drink’s popularity fuelled by popular culture and Sex & The City.

The problem was, though, that the Cosmopolitan — which is a perfectly good drink — was made so terribly most of the time, drowning in cranberry juice and sweeter than sugar syrup.

If only bartenders had followed the Dale DeGroff Cosmopolitan recipe we have for you here, there would have been many more happy guests.

But the bartender most associated with the Cosmopolitan recipe is Dale DeGroff. He used to be credited with the drinks invention, though he’s never claimed it; rather he “popularised a definitive recipe that became widely accepted as the standard,” he says.

That brings us to DeGroff’s recipe below — though you’re best to watch the master at work in the video, to catch him performing his trademark citrus flaming. 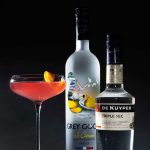 Dale DeGroff has been a cocktail authority for over three decades, been credited with reviving the profession of bartending and setting off a cocktail explosion that continues to transform the industry to this day. He developed his extraordinary techniques and talent at the legendary Rainbow Room, where in the 1980’s, he pioneered a gourmet approach to recreating the classic cocktails and popularised the Cosmopolitan.

De Kuyper, the world’s number one selling liqueur brand, partnered with Dale DeGroff on this year’s edition of The Works program. The Works is a series of inspirational workshops designed to upskill bartenders and consumers on cocktail trends, and this year saw DeGroff travelling around Australia educating our bartenders.