On the inspiration behind her drink, Millie Tang says:
It’s an idea I’ve always had to use if I was going to enter a cocktail competition  — it’s been stuck in my head. But I was like, how am I going to come up with the ingredients in the drink?

I sat down and wrote a word association as I was writing it out. I had an original idea — and it was shut down. I dumped it into the drain, 24 hours before it was due. I wasn’t going to enter this year. But Jack [Stacey from The Gresham] pushed me, told me ‘Don’t give up — go into the back room, sit down for an hour, come up with an idea.’ And that’s when I got it. It’s about inspiration.

To be honest, my upbringing? Chicks are my family. The very first ingredient I could think of was honey, because my mum is just crazy — she has bee suits in the backyard. I have terror every time I have to look after her place for the weekend, I don’t want to go down and look after the chickens because there’s a bee hive right there! I got stung once when I was young and it was painful. It’s horrible to me! Honey’s okay, but my mum is obsessed with it. Her car is legitimately a black and yellow Mini.

So honey is for my mum, the violette is for my grandma. The first time I can remember getting my arse beaten was when my granddad told me off for picking too many violets from her garden. And when I first tasted the Aviation, that was my inspiration for cocktails, at Press Club — Sean Chow made it for me. It was the first original taste where I had never tasted anything like it before in my life. I’ve been obsessed with violette ever since — it’s in my perfume, everything.

And obviously the lime is for my friend Courtney. She absolutely hates citrus, and I used to sneak it into all her drinks at Deathproof — I was like, ‘You need to take some vitamins or you’re going to get scurvy. You’re a dancer — be healthy!’ Now she’s dancing at the Moulin Rouge in Paris and she doesn’t have scurvy — it’s all up to me. I did that.

The last thing, the Coco Lopez refers to coconut body products, a fake tan for a friend Jordy who used to wear it all the time and I hated it. It turned me off it so bad — she used to stink of vanilla and coconut all the time, I can’t take it.

And the girl who it’s named after, she’s an artist and a photographer who goes under the name Me Oh My Girl, and I’ve been friends with her for a long time. I wanted her permission to name it after her, and she came and tasted it and said, ‘Girl, it tastes like a Gucci Daiquiri.’ Yes! That’s what I’ve been waiting for!

I feel like it was just the right time and the right culmination of people, to be honest. 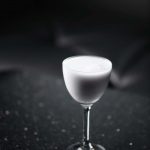