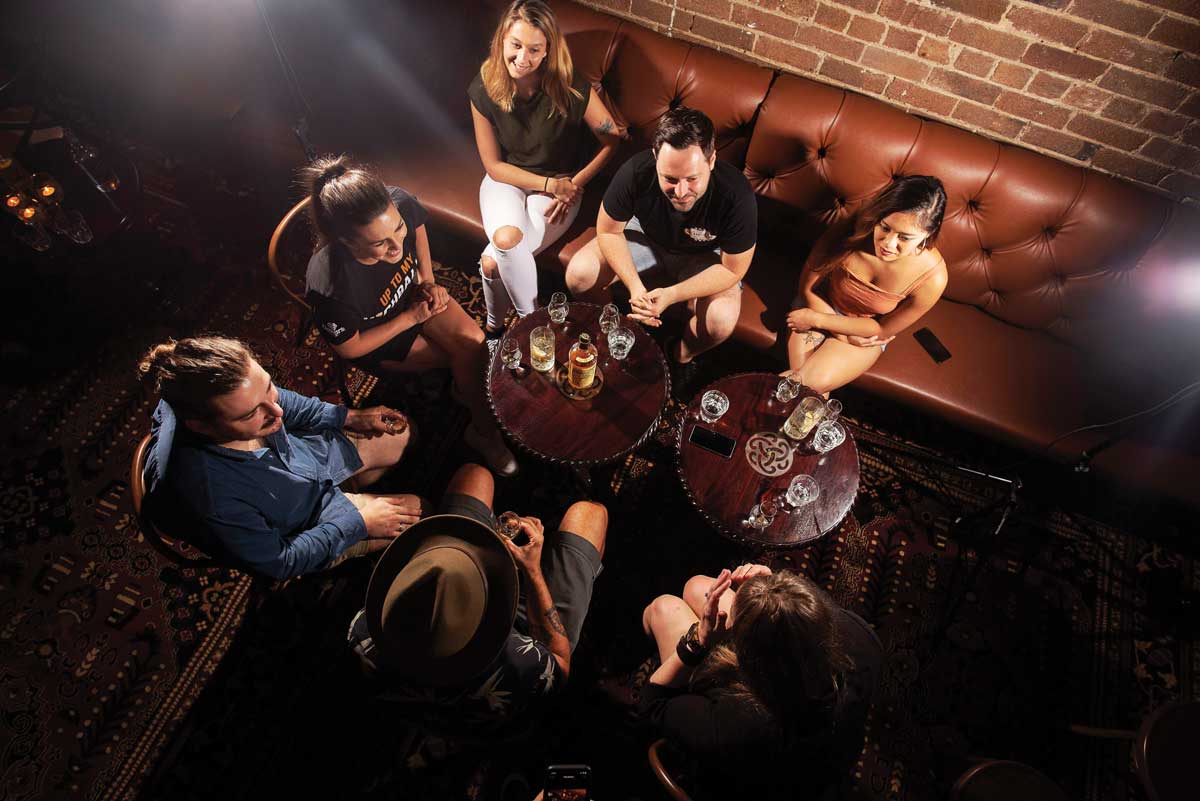 Seven whiskies, six bartenders, and one Dewar’s ambassador, Georgie Mann. That was the combination we pulled together for a one-off tasting this month, held on a sparkling Wednesday afternoon at Darlinghurst bar, Mister Pocket.

We set out on a deep dive into a number of John Dewar & Sons single malts, Aberfeldy and Craigellachie, as well as their signature Dewar’s aged blends. With Georgie Mann as our host and a Dewar’s Original Highball in hand, we were off to a civilised start.

“They’re delicious,” says Mann of the Highballs. “The Highball is a drink that’s been around for centuries, right? But it was originally drunk with cognac. Then during the late 1800s, the Phylloxera virus wiped out all the grapevines in France, so Tommy Dewar, who was the son of one of our founders, pioneered the Highball with whisky.”

They make quite a lot out of the efforts of the intrepid Tommy Dewar, as Mann explains.

“Tommy was quite an entrepreneur and innovator — he commissioned the first ever moving picture for any product as an advertisement featuring characters acting out ‘The Whisky of his Forefathers’ painting, it was projected onto the side of a building in New York.”

First up in the tasting: Dewar’s 12 The Ancestor. “It’s a blend of up to 30 single malts and grains,” says Mann by way of introduction. “Our master distiller at the moment is a lady called Stephanie McLeod — she’s our first female distiller, and the seventh we’ve ever had.”

Early on we establish the hallmarks of the Dewar’s style. Mann says that there “is definitely this extra smoothness, a honeyed sweetness that comes through rather than a caramel sweetness. That’s predominantly because of Aberfeldy single malt, which is the heart of all our blends.”

Both Mjølner’s Alex Dahlenburg and The Baxter Inn’s Stuart Morrow quickly pick up on the honey and vanilla in the Dewar’s 12.

“I’ve always found it to be quite floral and quite waxy on your tongue,” says Nguyen. “That’s why I’ve always liked putting Dewar’s 12 inside Penicillins because I feel that floral note goes really well with ginger.”

Mann explains that the extra smoothness you find in the Dewar’s range, well, that comes down to their double ageing process.

“The whiskies are aged, blended together, then they age again for another six months which allows the flavours there to mellow out and to get to know each other,” she says. “That smoothness and honey is consistent [across the range] and it is that lighter flavour profile — there’s no Islay whiskies in our products. There’s a touch of smoke that comes through in some of them, but it comes through from the Craigellachie.”

When it comes to mixing with this whisky, the panel suggests Highballs (of course), as well as introducing some Shrubs, something with a hint of sourness to it.

Next up, Dewar’s 15. The Monarch, as it’s called, is the first bottling that master distiller Stephanie McLeod developed, and they developed it initially for the Chinese market.

“It’s so much more fresh up front,” says Dahlenburg. “It’s a little bit grassy,” says Nguyen, while Alex Vrignon from The Duke of Clarence picked up some honey notes.

“There’s almost a little bit of menthol on the finish,” says Dahlenburg. “That’s the fresh burst.”

“There’s honey on the front, like the 12,” says Morrow, “but it opens up to a bigger spectrum of flavours, a lot more spice in the mid-palate.”

It’s fair to say that the Dewar’s 15 sparked some discussion, and when it came to mixing, the bartenders on the panel leaned towards a stirred down, spirit-forward style of drink.

“It’s got a heavy brown sugar to it on the finish,” says Dahlenburg. “This would sit better in an Old Fashioned.”

Nguyen thought the floral notes could lift a Cameron’s Kick. “I think it would work in a Cameron’s Kick; the orgeat would then play along with the more full-bodied sweetness this has,” she says.

Mann’s go-to cocktail for The Monarch, though, is a repurposed rye whiskey drink.

“I actually drink it in something that is stirred down and spirit forward — it works really well in a Bensonhurst, which is meant to be with rye whiskey,” she says. Think 40ml of The Monarch, 30ml dry vermouth, 10ml Cynar and 10ml maraschino and you’re on the right track.

And when it comes to the name, The Monarch?

“Every Dewar’s product has a name to it,” says Mann, “and The Monarch has a funny old nod to Tommy in it as well. Dewar’s was the first blend of Scotch whisky to receive the Royal Warrant. In the blended whisky category, we’re the only company to hold it through every reign.

“Based on this long heritage with royalty, I assumed that The Monarch referred to that. It actually refers to a painting that Tommy bought. He liked to spend a lot of money — he holds the record for the longest stay at The Savoy in London, nearly 30 years. The Monarch of the Glen is the picture of a stag in front of a glen that Tommy bought.”

We kept returning to the smoothness of each of the whiskies, particularly with the complex 18.  “All of our products are double aged, which is not a cheap process to do,” says Mann.

It certainly pays off in the glass, however. For the Dewar’s 18 The Vintage, the use of ex-sherry casks in the ageing process became more apprent on the nose.

“There’s a lot more sherry influence coming through, it jumps out,” says Morrow.

Mann points out that when it comes to the ageing process, “there’s a mix of sherry and bourbon barrels [used],” she says.

The extra age of the spirit seemed to translate to a greater feel on the palate, too.

“It just feels darker,” says Mann. “A little bit of cacao and some dryness on the palate as well.”

When it comes to cocktailing applications, however, Morrow wanted to highlight the sherry barrel character he was picking up.

A few members of the panel also picked up some smoke on the finish, despite none of the barley being peated.

And just a point on the double ageing process — Dewar’s 18 is aged 18 years, then blended, before it sees another six months of ageing to bring all the flavours together. “Even the 25 year old that we have, they still double age it for six to nine months afterwards,” says Mann.

The Aberfeldy distillery is a result of Dewar’s successes, says Mann. “Dewar’s was doing super well, but they were buying all their whisky and then blending it,” explains Mann. “Tommy and John Alexander decided to establish Aberfeldy to be the heart of the Dewar’s blend. It sits along the River Tay, Scotland’s longest river, and the water source they use is known as The Pitilie Burn which was famous for its gold deposits back in the day. That’s why the Aberfeldy has the nickname of the golden dram.”

As Mann says, Aberfeldy is the heart of all the Dewar’s blends, and it’s a distinctive make in its own right.

“It does have a long fermentation as well, 72 hours — anything over 70 hours is considered long,” says Mann. “It helps to build those honeyed notes in the whisky. There’s a fair amount of sherry cask used for this guy as well.”

Some of the panel were picking up some rather fruity aromas — green apple, if you ask Dhalenburg — whereas others picked up more of an oat character. “Like an oat biscuit,” says Morrow.

“We had this in the Golden Dram — an Old Fashioned with some honey, it’s really good, it’s so nice,” says Engeler.

“I’ve had people try pick it for Whisky Sours before,” says Morrow, “and it’s pretty full on — it’s not my pick. I think because that finish really dries out, you need something to counteract that dry finish. There’s a drink called a Rapscallion, I think that would work well.”

“Another one is the Dramble,” says Mann. “It’s like a Bramble but with Dewar’s. It’s perfect as a fruity whisky cocktail.”

Craigellachie 13
“Now we’re going to have something completely different in style,” says Mann. “Craigellachie is in the heart of Speyside, but in terms of regionality, it’s not your typical Speyside style. There’s two guys behind it: Peter Mackie and Alexander Edward. Peter Mackie is known for starting Lagavulin, and then he wanted to make something different. He teamed up with Alexander Edward, who was more of a businessman in the whisky world, and they created Craigellachie back in 1891 — and it was even considered old fashioned back then.” Why, you may ask? Well, Mann explains that it is in the way that it is made. “Because of the use of worm tubs,” she says. “There’s over 126 distilleries in Scotland and more reopening and getting commissioned, and only 17 distilleries use worm tub condensers. Because you’ve only got one copper surface to condense your vapours back down — less copper contact — means you’re leaving the sulphurs in there and you’re getting a bigger, bolder flavour, which is what they wanted for Craigellachie.”

But when it comes to cocktail applications, well, we’ll let Morrow explain: “The price point is probably a little bit high for cocktails,” says Morrow.

Both Darhelnburg and Vrignon thought it would pair nicely with a wheat beer, something like a Hoegaarden, in the traditional Boilermaker serve.

“I get a lot more tropical out of this one,” says Morrow.

Mann next points out the age statements of Craigellachie.

“I guess in terms of our age statements, Craigellachie is quite unusual — we go 13, 17, 23, as the core range,” she says. “Anyone know what they all have in common, what type of numbers they are?” she asks.  “Prime numbers. It might have started by accident, but this is our thing. They try to do things a little bit different.”

Mann says that she has a soft spot for the Craigellachie 17 — it’s her favourite — and the panel was enjoying the tropical fruit vibes. “I get tropical fruit, but not ripe fruits,” says Malavenda, while others picked up pineapple and a Pina Colada-like character.

“It’s super dry; there’s a spice that’s like black pepper or something,” says Morrow. “You still get that typical honey and vanilla.”

“I’d go an Improved Whisky Cocktail type — a touch of curacao, absinthe, bitters, sugar — it’s quite dry and spicy and needs that sweetening, but keep it simple. A dash here, a dash there. Absinthe would highlight that menthol character,” says Morrow.

“Even an absinthe rinse in the glass would be really cool,” says Nguyen.

“In 2015 Craigellachie 23 won the best in show at the San Francisco Spirit Awards,” says Mann.

This is a special whisky — the panel went quite while they tasted this one.

“I’m getting a bit of melon,” says Morrow. “I could really go some honeydew melon and prosciutto with this,” says Nguyen.

Again, Mann says that the barrels used for ageing the Craigellachie are a fifty-fifty mix of ex-sherry and ex-bourbon barrels.

Whatever it is they’re ageing this whisky in, it’s working. There’s kiwifruit, licorice, treacle characters to be found — one of the day’s best. “Neat,” says Dahlenburg on how to drink it. “Only drink this neat.”