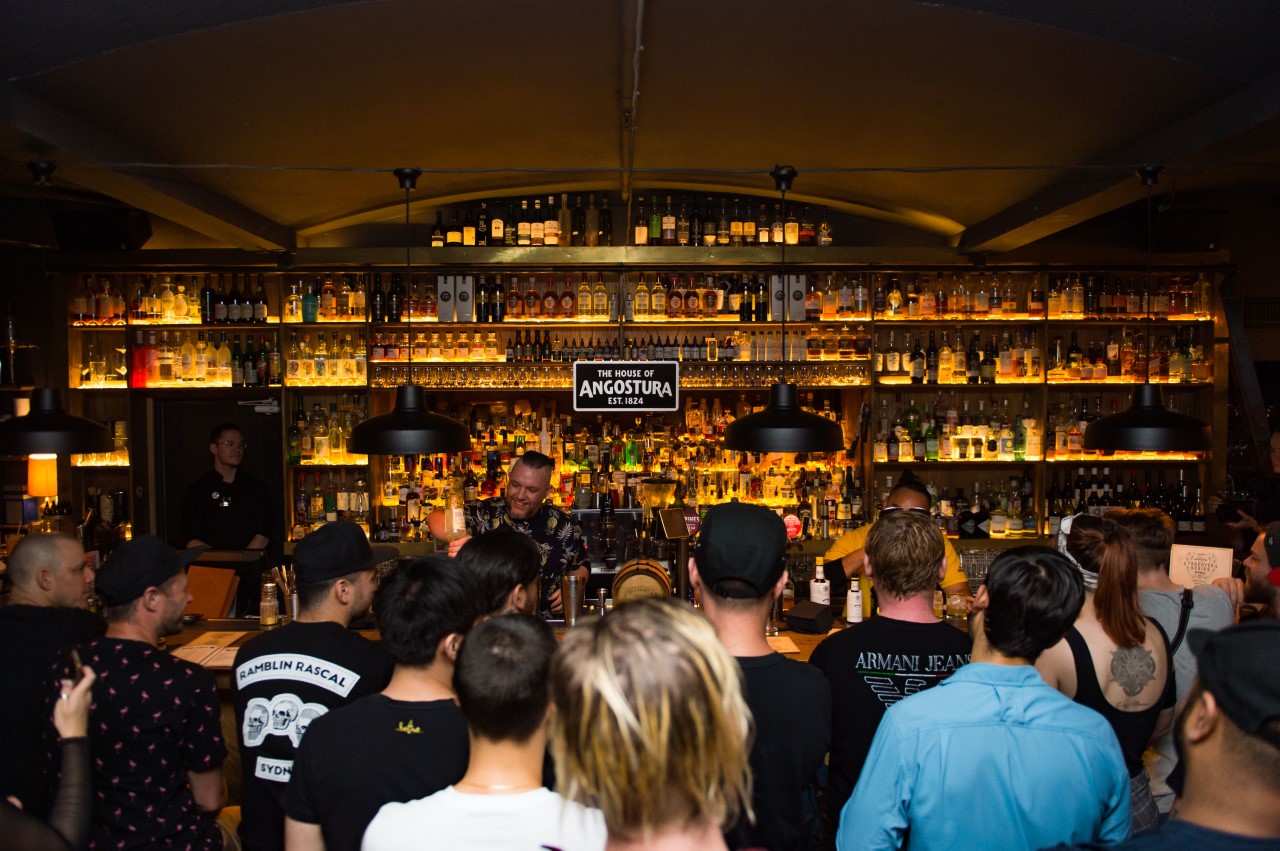 It was a star-studded Monday night at Beneath Driver Lane in Melbourne when Australia took on New Zealand for the House of Angostura friendly bartender battle.

Ray fronted a strong NZ contingent with Alex Grumball from Ends and Means, Max Hart formerly of Speakeasy Group Melbourne, Korinna Molenaar from Om Nom Kitchen, Matty Brightwell from Bar Eight and Nick Cozens from the new Leonards Pizza Palace, all serving up some seriously impressive drinks, but not enough to beat the Aussie gang.

It was a close-run thing, but Dan’s team – Bonnie Nicol from Talk to me, Reuben Beasley-Palmer from Black Pearl, Tony Huang from Lui Bar, Taylor Matthews from Beneath Driver Land and Josh Nicholson, from Hatts and Tatts – won…just!

Just like a classic tag-team battle both the Ambassadors from The House of Angostura took the bar and presented two drinks each which was open to anything from the full range. Both Dan and Ray had the crowd’s attention the whole time and kept the first round tight in points.

Up next was Bonnie versus Alex in the Mojito challenge. The Aussie team showed its true colours within minutes, with Bonnie racking up some serious points for crowd participation and solid banter on the bar.

Rueben from Black Pearl jumped on bar to take on Max Hart in the third round with an Old Cuban challenge with Angostura 5 year Old. Max got straight into it with a Nitro Chilled L&P Twist while Rueben had the crowd chanting “Aussie, Aussie, Aussie” throughout the round. By Round Three, it was looking like a tight game from both teams.

For Round Four, Tony from Lui bar took on newcomer, Korinna Molenaar from Om Now Kitchen, for the Pina Colada challenge. Both drinks were strong and some of the top drinks of the night.

Taylor from Beneath Driver Lane was up next, proudly wearing his Wallabies shirt in his battle against Matty Brightwell. Here, the game started to shift, with the crowd backing the Aussies in the Angostura 1919 showdown.

Last but not least, old rivals Josh Nicholson and Nick Cozens, both well known as solid competitors, had a short amount of time to throw down an original drink made with Amaro di Angostura. For this final round, the score was closer than any other.

The teams were scored across six categories – speed, presentation, wit, crowd participation, drink and special ingredients – and by the end of the night, it was clear the home team has taken the win.

Team AU won by a stunning 398 points to 348.5 against the Kiwis. With plenty of banter, a touch of friendly slander and some seriously cracking drinks, it was a match to remember.

Dan, said, “A bit of healthy competition between our two great nations is always fun. My team was awesome and it was nice to be competing just for laughs for a change.”

Ray, added, “No doubt, Dan and his team are some of the best in the business, but we put up a good fight. I say bring on a re-match.”

The House of Angostura will be back to host its Global Cocktail Challenge later in the year. Entries will open mid-2019.