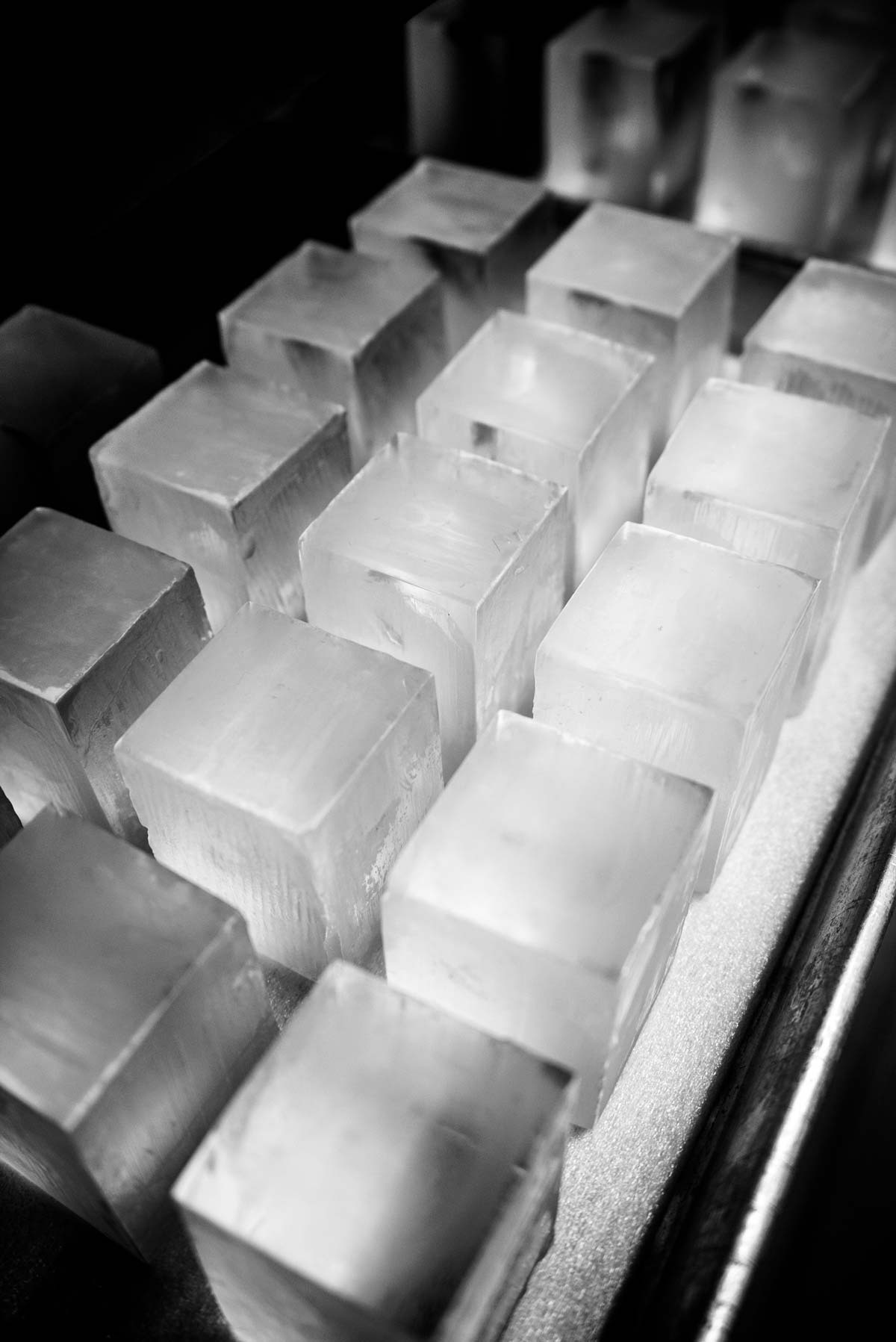 Ice. It’s something that is so commonplace that it is easy to overlook its importance. And not just when it comes to cocktails and drinkmaking — we know that ice is essential to getting a drink just right. The ice trade in the 1800s began with harvesting natural ice, which was getting easier to transport, before the first commercial ice factory came into existence later in the century (in New Orleans, no less).

As in many endeavours, there’s evidence that the Chinese were using ice to preserve food back some 3000 years ago. And throughout history, ice has been something that only the rich and powerful got to play with.

But in the early 1800s, that began to change, thanks to one big name who pioneered the ice trade in the USA: Frederic Tudor.

It was Tudor — who would become known as the ice king — that developed new and innovative ways to both store and transport ice, ways which would reduce the cost of ice for the end consumer. He started his Wenham Lake Ice company in 1804, and was motivated by the idea of supplying ice harvested from the lakes of Massachusetts to the tropics of Cuba and beyond.

Over time Tudor refined his means of transporting and storing ice — he insulated it with sawdust and worked out that packing the ice tightly would reduce the rate at which it melted — and ended up sending his ice across the globe, to Queen Victoria in England and all the way down to India and Australia.

It wasn’t until 1839, however, that we first get reports of ice arriving in Sydney — all the way from the USA ice harvest and courtesy of Wenham Lake Ice — aboard an insulated sailing ship called the Tartar.

The first ice machine was invented in the USA in 1845 by a Florida doctor, John Gorrie, though it would take until 1868 for the first commercial ice factory to be established (in the cocktail capital that is New Orleans, no less).

But there are reports that Australia may have beaten the Yanks to the punch: in Sydney in 1848 you could buy a iced lemonade — made with manufactured ice — at the Victoria Refreshment Rooms in Pitt Street.

The US-based writer Camper English is kind of The Ice Guy. For a long time he’s been writing about his experiments in making clear ice, which resulted in his directional freezing method. Put simply, he fills an esky with water, leaves the top off, and pops it into a freezer. It freezes like a lake — from the top down — and pushes the impurities into the bottom of the block ice, which can be removed to give you crystal clear ice. He also published a DIY Clinebell method — take a look at that yourself at alcademics.com.

It’s the nifty trick that bartenders around the world come out to watch whenever Japanese bartender, Hidetsguo Ueno — or Ueno-San as he’s better known — is doing a demo in town. The master bartender takes a big cube of crystal-clear ice, and knocks away the edges until it is the shape of a diamond.

The whole process takes him around two minutes.

A couple of years back we spoke to Sydney bartender and co-owner of Tokyo Bird and Bancho, Yoshi Onishi, to get his advice on forming a sphere of crystal clear ice.

First up? “Keep your fingers out of the way,” he said. Starting with a big block of rectangular ice — which you can either buy in, or make yourself — he needs to carve off smaller block which will then be fashioned into a cube, and then a sphere.

“What I usually do is score it,” he said. “Start with one end, score it through to the other so you’ve got a groove. And then saw it like you’re chopping down a tree. Once you get to halfway, the cut should be clean.”

“You just give it a good tap,” he said. “Keep the knife as straight as possible, and what you’re doing is getting a crack in the ice so you get a nice clean cut.”

The next step is to get a cube from your rectangle — again, score the block, and crack it in half.

Once you have your squared cube, the shaping begins with the ice pick.

“I start by using the small pick, it’s for fine detail,” said Onishi.

“I always start with the corners. The safest way when you’re first starting is to keep your palms together, so you never hit your fingers. The other trick is to make sure that the base hand rotates the ice, and the other hand is like throwing a dart at the ice. The harder you hit it, the bigger the chunk of ice that will come off,” he said.

Onishi repeates this until he gets rid of all the corners and edges, and is the right size for the glass.

Now, he takes a smaller knife to smooth out any remaining edges.

“Similar to peeling an apple, just be careful — probably practice with an apple to get used to the motion,” he said. “You’re just shaving off a little of the ice.”

Once this is done, whack into a glass and toast your skills with some expensive, hard to find whisky.

Onishi suggests prepping these before service, as it does take time — even for a pro.

“I try to prep everything before service, unless it’s a slower night,” he said. Which, when you’re serving 50 or more of these spheres a night, is not a bad idea.

Here’s the reason why good ice is so important when it comes to making good cocktails: good, dense ice chills the drink, whilst reducing the rate at which it dilutes.

Take a look at your ice well. On the surface of each cube of icethere is a layer of water. And if you’re using smaller cubes of ice, you will have a greater surface area of ice cubes — and therefore greater amount of water sitting on the surface area of the cubes — that is going into that beautiful stirred down boozy cocktail you’re making. You’re needlessly adding dilution before the drink has a chance to get down to temperature.

Therefor it is going to be preferable to use larger, denser blocks of ice to chill your cocktails.

The key to crystal clear ice? It’s the way the water freezes.

Have you ever looked at an ice cube closely, one of the ones you pull from an ice tray in your freezer at home? You’ll notice that parts of the cube are clear, and there’s usually a corner of the ice in which it is cloudy. That’s the impurities in the water getting trapped during the freezing process. The problem with these cubes freezing in your freezer are two-fold: they freeze from the top first, and they freeze too quick.

The Clinebell machine is a large ice block making machine used by ice making companies. It takes anywhere from two to four days to make a large block of clear ice with a Clinebell. The Clinebell freezes from the bottom on up, and has a circulator moving the water around at the top of the block — this means that no air is trapped in the block, and results in a crystal clear, dense block of ice.

The guys at Bare Bones Ice Co in Sydney have two Clinebells, which produce 150 kilogram blocks of ice. They’ll then take that and using a bandsaw, cut up the blocks into different sizes for delivery to bars.

Where to buy it

We know of three killer ice makers set up and dedicated to the bar trade.

In Sydney, you have two former bartenders of The Baxter Inn — Damien Liot and Simon Weiss — who began Bare Bones Ice Co back in 2017; In Melbourne, the first dedicated bar trade ice company in Australia — Navy Strength Ice Co was started by The Everleigh’s Michael Madrusan back in 2015. And in Tasmania, you’ve got Adam Turner’s Antarctic Ice Co pumping out the clear Clinebell stuff.

As we said, these folks are dedicated to supplying the bar trade, so you’ll be able to pick up a range of different ice shapes to suit your bar needs.

Ice isn’t just something that makes your drink cold; its presence in the mix fundamentally changes the way the other ingredients play with each other and, importantly, alter the way that we humans perceive the taste of the drink.

Researchers from the University of Leuven in Belgium wrote in the journal Nature in 2005 that in addition to the five major taste receptors we have — for salty, bitter, sweet, sour, and umami — there are micro channels that run between these taste receptors and that are activated in response to temperature. The basic gist of it is that the warmer the temperature of food or drink, the more heightened our perception of its taste is.

The researchers explained this by way of ice cream: fresh from the freezer, the sweetness of the ice cream isn’t readily apparent. However wait for the ice cream to melt and come to room temperature — then you’ll know just how much damn sugar is put into ice cream.

So, ice in a drink not only makes the drink cold, it also reduces the perception of sweetness in the mix.

This website will help you to not kill your customers