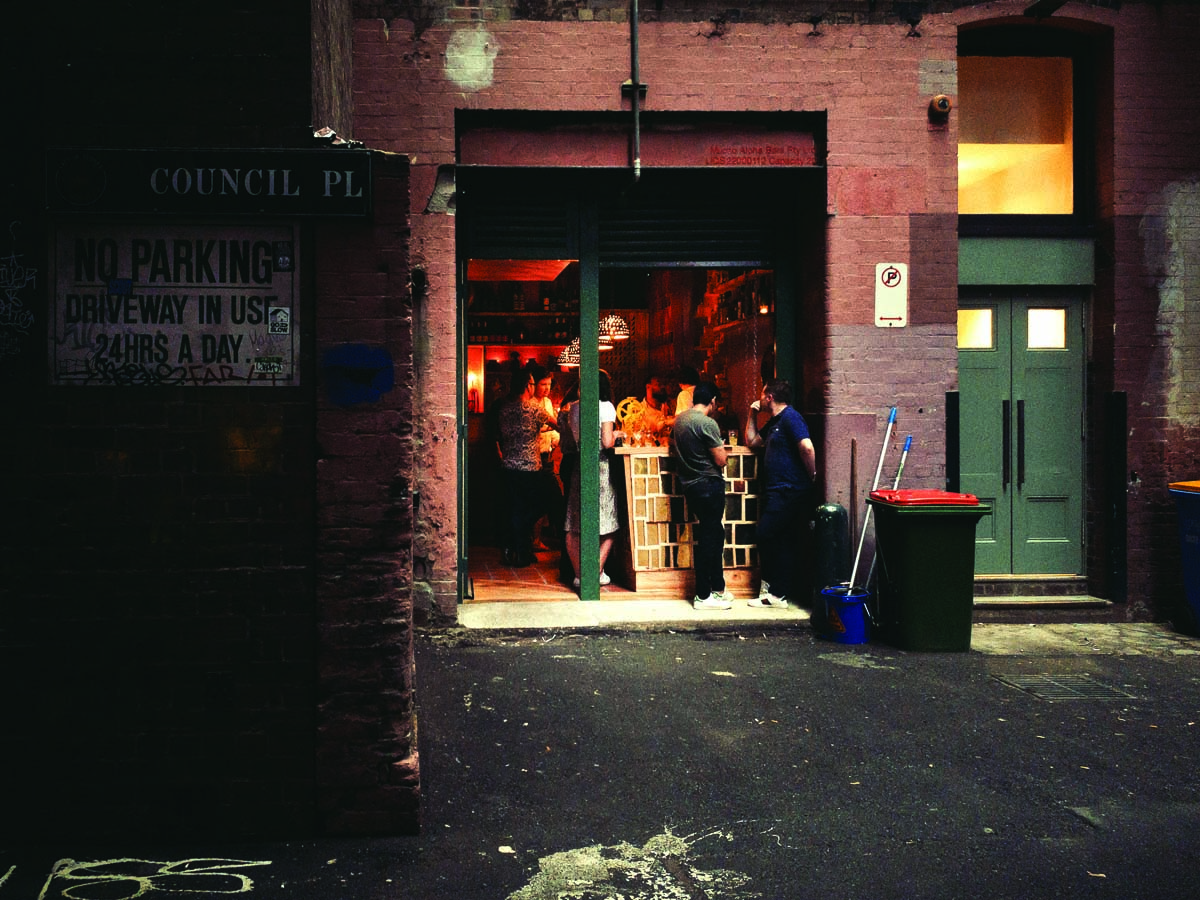 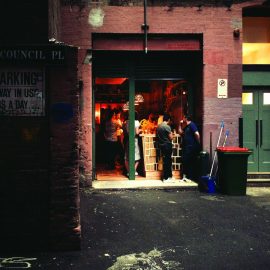 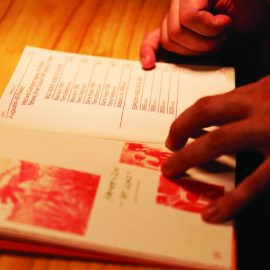 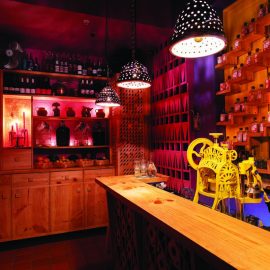 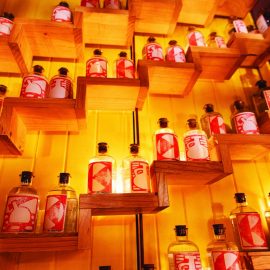 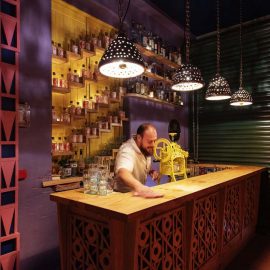 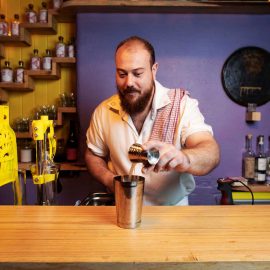 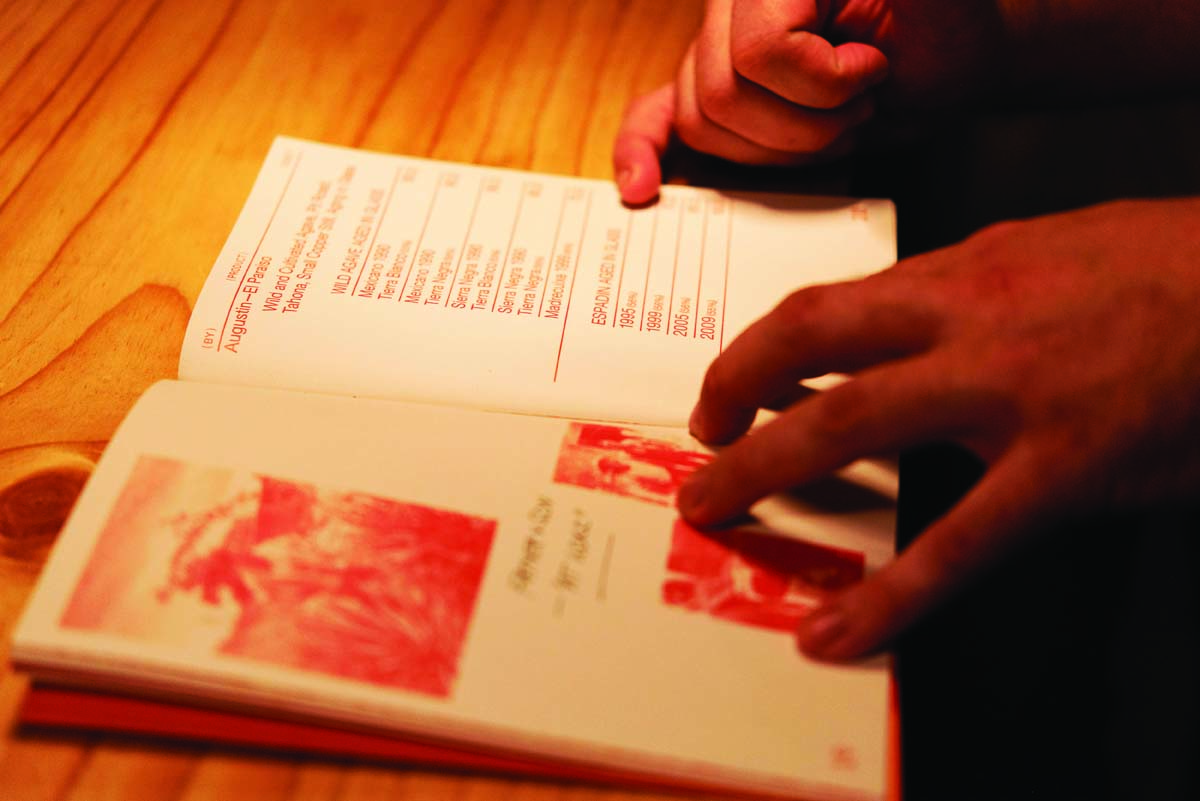 The menu reads like a travelogue of the team's journeys through mezcal country in Mexico. Photo: Christopher Pearce 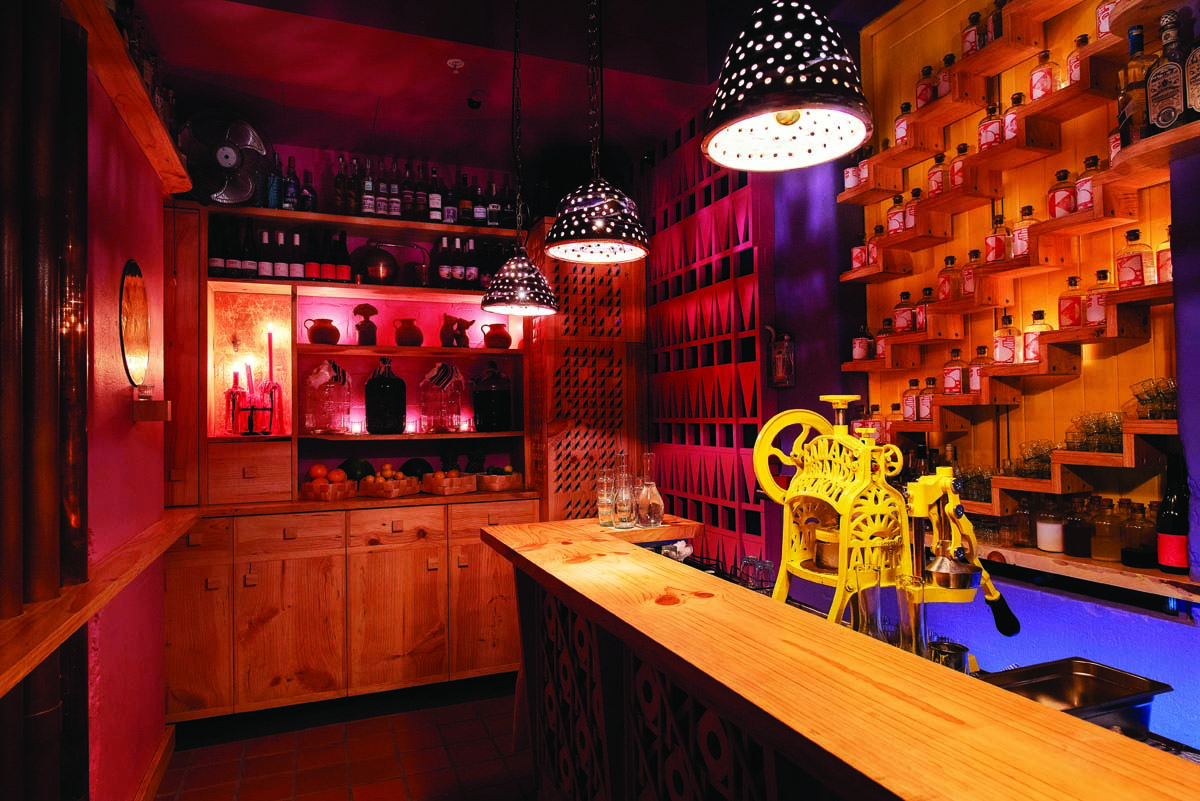 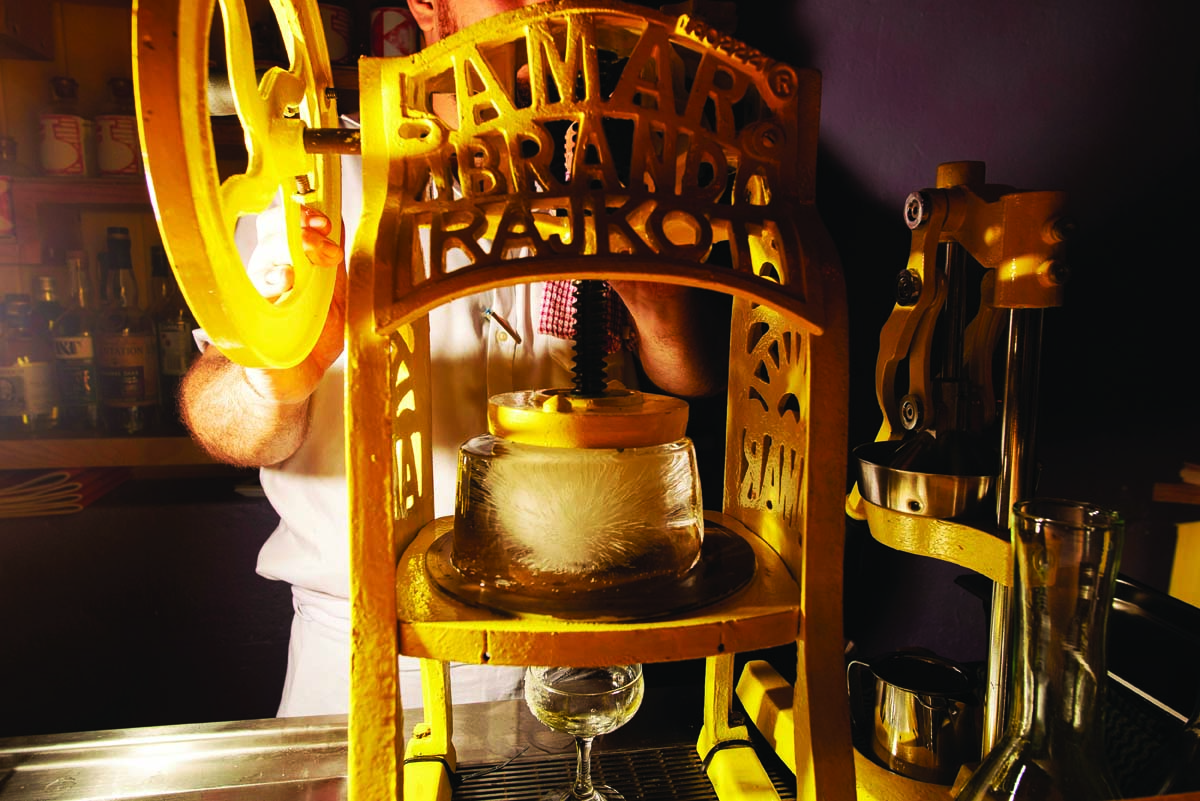 Their shaved ice machine was brought back from Nepal by one of their barbacks. Photo: Christopher Pearce 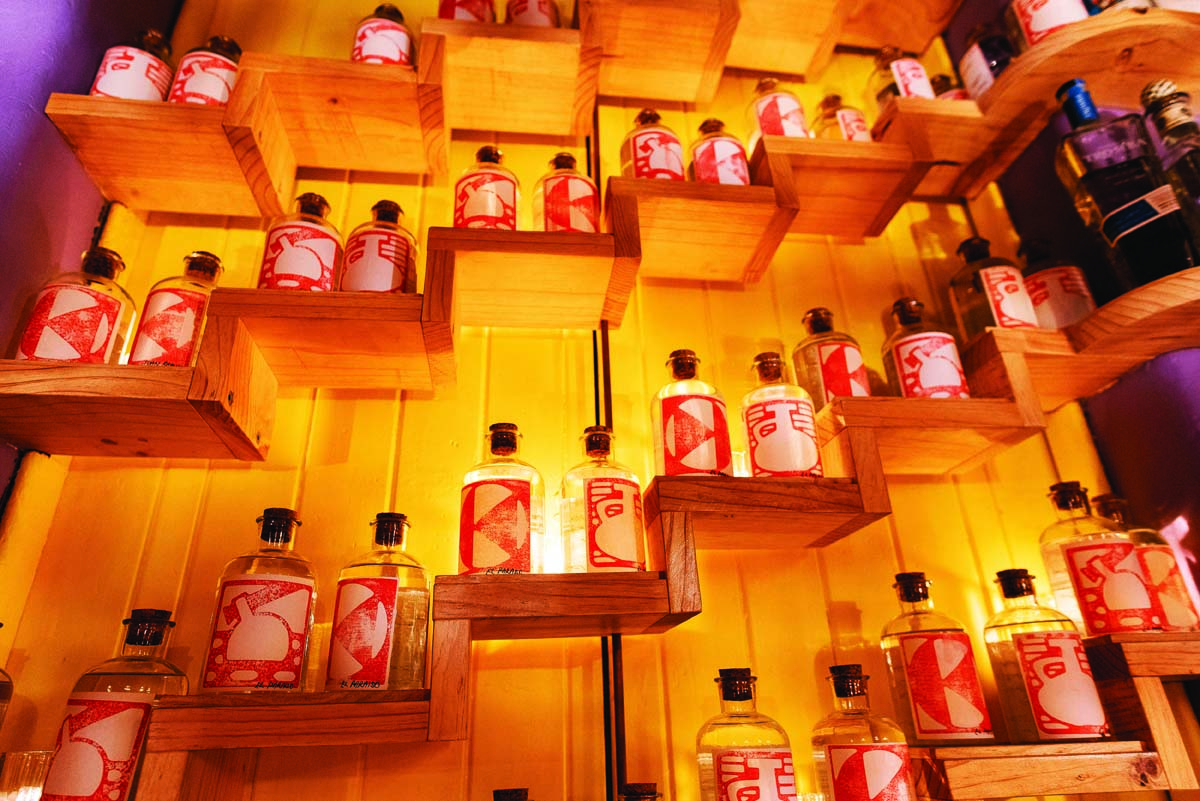 Each of the rows of mezcal represents a journey the team have taken in Mexico. Photo: Christopher Pearce 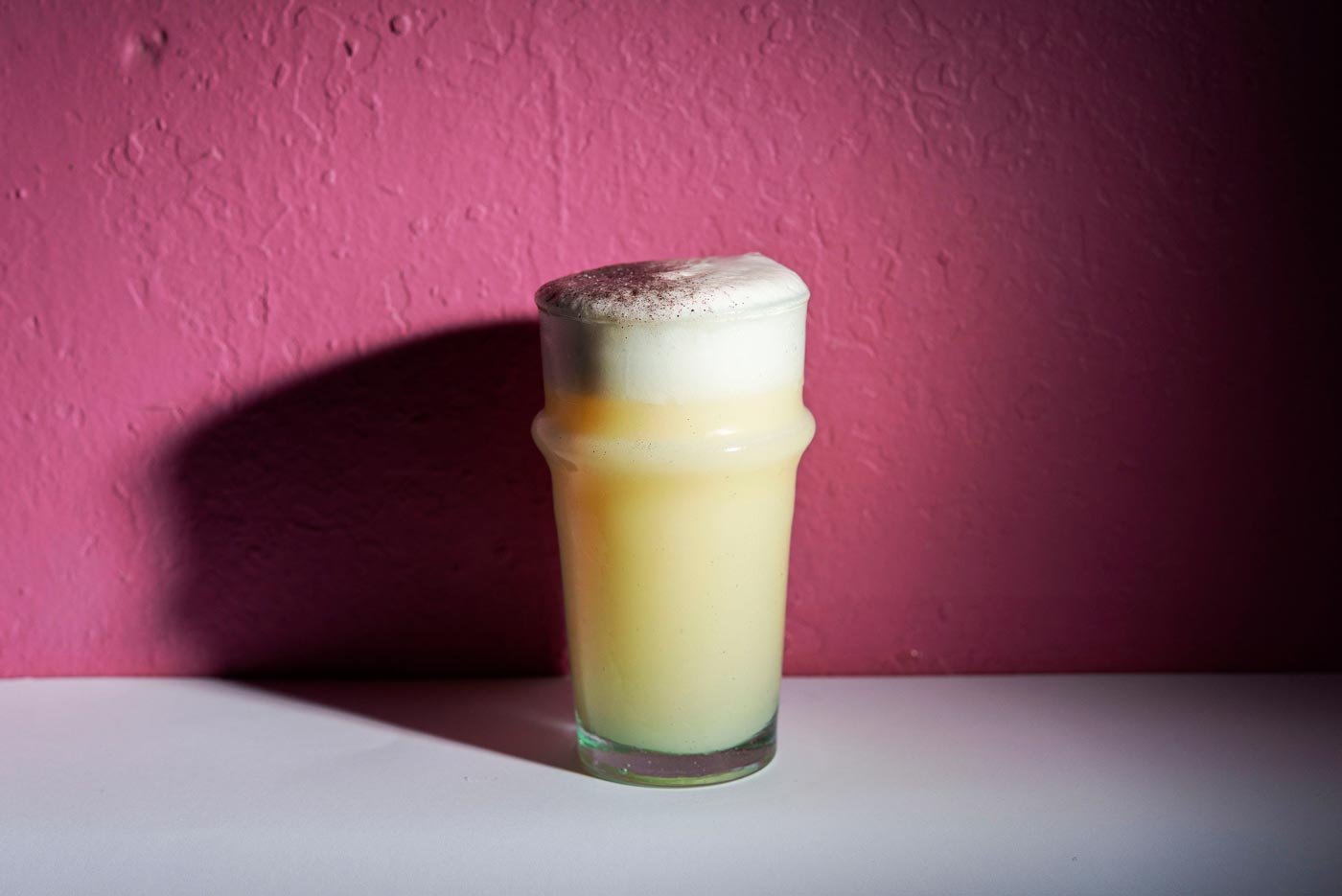 Just what constitutes a small bar? In NSW, the small bar licence caters for up to 100 people; when we think about small bars, places like Bar Americano and Above Board and — well, Melbourne bars more broadly — spring to mind.

But the title of Sydney’s smallest bar has gotta go to the latest from the award-winning team behind Tio’s Cerveceria and The Cliff Dive. Their latest effort, Cantina OK!, opened in March and from the opening night on, have had hospo types talking.

Set inside a garage down the end of an alleyway off Clarence Street in the CBD, Cantina OK! (that exclamation mark is intentional, by the way) is a mezcal bar from owners Alex Dowd and Jeremy Blackmore, with space for just 20 people.

The project has been in the works for the better part of two years, says bar manager Alex ‘Happy’ Gilmour.

“The guys walked in and found the space, and Alex was like, ‘Yep!’ And Jeremy was like, ‘Nope!’ They went back and did the numbers and decided that we could make it work.”

There’s something for everyone to find in the design; the front of the bar features these little mirrors, so that when you look at the bar from the street of an evening it dazzles — it catches your eye, and looks like some place you want to be.

“Their attention to detail is so finessed and so amazing, that the bar is really fun to look at — all the wood comes from one tree, and our joiner put it all together by hand. The ceramics are all by a friend of ours, a Mexican ceramic artist. The mezcal and the menu are tied very closely to our expedition through Mexico.”

They’ve got a fixed list of a small number of classic-styled drinks — you’ll want to take a look at out How To this month to get their recipe for the Margarita OK!, a spec which we think is as necessary in your repertoire as the Tommy’s Margarita — and they’re rotating a special drink each week; the first week it was a Raspberry Daiquiri, the next week a riff on the Paloma using some obscure variety of lime.

But the real treat here, of course, is their mezcal.

“We managed to import all these products ourselves, and showcase them in a way that no-one else in the world can,” says Gilmour. The uniqueness to the offering comes down to the menu, too. It’s beautifully designed, featuring photographs they’ve taken themselves when they’ve been in Mexico, and highlighting the agave spirits they picked up along the way.

“We’re trying to show people through photographs [in the menu] that Dowdy took on 35mm film, and the booze that we went to, saw, tasted and explored, this is our story of Mexico. Where we stopped, who we talked to, who our friends are as well,” he says.

There’s a range of hand-labelled bottles on the back bar arranged in flights — these are the bottles that they’ve brought back from Mexico themselves, a result of their regular expeditions to find the rare and the delicious agave stuff.

“We got to see this guy, who in the morning, got these big clay coffee mugs, put cacao and raicilla in there, lit the raicilla on fire and then squeezed fresh milk out of a cow straight into it,” says Gilmour.

“He wouldn’t let us do it because he was worried about the cow’s safety. It was about six o’clock in the morning.”

With a bar this small and with space so tight, they have to go without some of the luxuries bartenders usually take for granted. You know, like an ice machine, say, or a walk in-fridge to keep stuff cold.

Luckily Sydney has its own dedicated bar ice purveyor, so the guys at Cantina OK! are buying block ice from Bare Bones Ice Co.

We were struck by just how well-supported and busy the guys have been since they opened. As we write this, they’re about three weeks in, Gilmour doesn’t seem to have had much in the way of time off (such are the pleasures of getting a new bar open), and they seem to be at capacity each of the four times we’ve been in.

Some of that may have to do with their consistent licence hours — they’re open from 4pm to 2am every day of the week, something that is sure to delight the hospo types in the area — but we think it’s more than that.

We think it’s because this kind of bar is just what lockout-era Sydney needs. A small, characterful place, one run by people who care about what they do, about giving great service, who care about the stuff they’re putting down over the bar.

You can find Cantina OK! in Council Place in Sydney.

ecoSPIRITS Forest Program: Save 150g of carbon emissions per cocktail