We’ve got a fixin’ for some single malt whisky mixing. We’ve written before about how single malt gets overlooked when it comes to whisky cocktails; more often than not the bottle you grab will be something blended, or one of those whiskeys — spelt with an ‘e’ — from the USA or Ireland.

Andrew Ratcliff, whisky specialist for Proximo Australia, reckons that the whisky provides pop to a simpler mix like the Whisky Ginger recipe we have here. 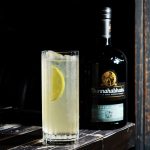