With summer firmly in the rearview mirror, we’ve got a fixin’ for some single malt whisky mixing. We’ve written before about how single malt gets overlooked when it comes to whisky cocktails; more often than not the bottle you grab will be something blended, or one of those whiskeys — spelt with an ‘e’ — from the USA or Ireland.

And it makes  Bunnahabhain Stiùireadair delicious in the breakfast cocktail par excellence: the Morning Glory Fizz. We’ve featured this drink a few times before, but Andrew Ratcliff’s take on the drink switches the absinthe quotient to an aromatic spray on top; it’s a Whisky Fizz, essentially, with an aromatic hit of anise.

Take a look at the recipe below and check out the video with Ratcliff, who is the whisky specialist for Proximo Australia — it’s a banger. 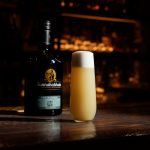