In all the time that humans have been producing distilled spirits, throughout all the research and experimentation and innovation, one aspect of the production process remains relatively unchanged today from 200 years ago: the maturation of spirits in oak barrels.

The simple oak barrel is not much more than straight planks of oak, toasted on the inside then bent and bound together by a cooper. It’s a lo-fi piece of tech that’s remained unchained for generations. It’s a simple device: not only are barrels — thanks to their rounded staves — easily transportable (they’re both stackable and you can transport them by rolling them), they are also an essential ingredient: for example, Scotch ain’t Scotch until the spirit has spent three years in a barrel.

And though efforts have even made to use tech to hack the ageing process, the barrel remains essential to fine spirits.

American white oak (Quercus alba) tends to have a greater concentration of vanillins and wood sugars, but less tannin; the effect of French or European oak (Quercus robur) tends to be gentler, more porous (and thus, leeching more colour), and more subtle in terms of flavour, though there are also more tannins.

The staves for the barrel first need to be seasoned; this means that they lay outdoors subject to the elements for anywhere from six months (for bourbon barrels) to two years for high-end French oak wine barrels. Alternatively, they can be seasoned using a kiln, however this method has the drawback of creating greater astringency in the wood which comes out in the spirit during the maturation process.

Then man’s mastery over the elements comes into play. The cooper steams the staves into shape, guided by iron hoop rings. Then that oldest of forces, fire, is unleashed; it scorches the inside of the barrel killing off bacteria in the process. And, as nature would have it, the by-product of this is flavour. For wine barrels, this part is the toasting; for spirits, and bourbon in particular, this is when the char begins.

There are many variables for the cooper and distiller to consider.

For one, there are different levels of char. They’re known, in the US as Char 1 through to 4. For whiskey barrels the American process is to char quickly at high temperatures. The barrels are placed over a gas burning flame from anywhere from 15 seconds for a light char (char 1), 30 seconds for a medium char (char 2), 45 seconds for char 3 and for char 4 (known as an alligator char for the leathered, cracked  texture it attains) around 55 seconds.

But it’s not just time in terms of months and years which is important. It’s the changes in climate — often throughout the course of one day — that cause the spirit to ebb and flow through the red layer. As the day warms up, so too does the barrel and the spirit, with spirit going deeper into the wood; as the day cools and goes into night, the colder spirit contracts and comes out of the wood.

This ebb and flow is what gives aged spirits their colour and flavour.

The age of the barrel — and whether or not it has been used before — will also affect the final spirit. If a Scotch producer, say, ages their new make in a barrel that has previously held sherry, some of those flavour compounds from the sherry — despite having the barrels re-juvenated — will linger in the wood for the new make to extract. Generally speaking however, the higher the ABV of the original spirit stored in the barrel, the more flavour and colour that spirit will have extracted from the wood, and thus the less remains to be extracted on a second or third fill.

The ‘science’ of ageing

The maturation process does a few things, namely: extracts flavour from the wood, allows the spirit to oxidise and to marry flavour compounds together, and allows a concentration of the spirit. Being exposed to the air, “alcohol oxidises into aldehydes,” writes the late Mark Ridgwell in his book Spirits Distilled, a process he describes as esterification. These aldehydes oxidise into acids “which, in turn, react again with the alcohols themselves.”

There’s a lot going on, much of which is little understood. But the simplest effect we can describe is the way spirit extracts colour and flavour from the wood.

You know how putting an ingredient in a bottle of alcohol results in an infusion? You know, take those Skittles and stick them in vodka and voila: in addition to being transported back in time to 2002, you’ll also leach flavour and colour from the skittles into the alcohol.

A similar thing is happening when new make spirit goes into a barrel. Alcohol is a solvent, and the spirit soaks into the wood. When it does that, it extracts wood aroma compounds and tannins from the wood.

Chris Morris, master distiller for Brown-Forman, once described the process to us like this: “The charring of new oak produces a “red layer” of caramelised wood sugars in the oak just under the very visible layer of char. It also alters the oak tannins so that they appear red to the eye,” he said. “So our brands obtain 100% of their colour from exposure to the heat altered oak tannins, and their rich vanilla and caramel notes from the red layer.” But what does this red layer have to do with flavour? It is a source of the rich vanilla and caramel notes, said Morris.

“The spirit soaks into the oak, penetrating up to half the thickness of the barrel stave and heading,” he said.

“The spirit will quickly begin to dissolve and extract these colour aroma and flavour characteristics from the wood. The secret is to extract the right balance of sweet character and colour — because colour is tannin-driven and too much of that can be detrimental to the final product’s palate effect.”

But surely, in this day and in the most technological of ages, there must be some sort of shortcut? Some distillers have experimented with alternative ageing by blasting spirit in cask with ultrasound waves, and the Edrington Group— who own The Macallan among other brands — have even played around in this area.

Bottles made better by barrels 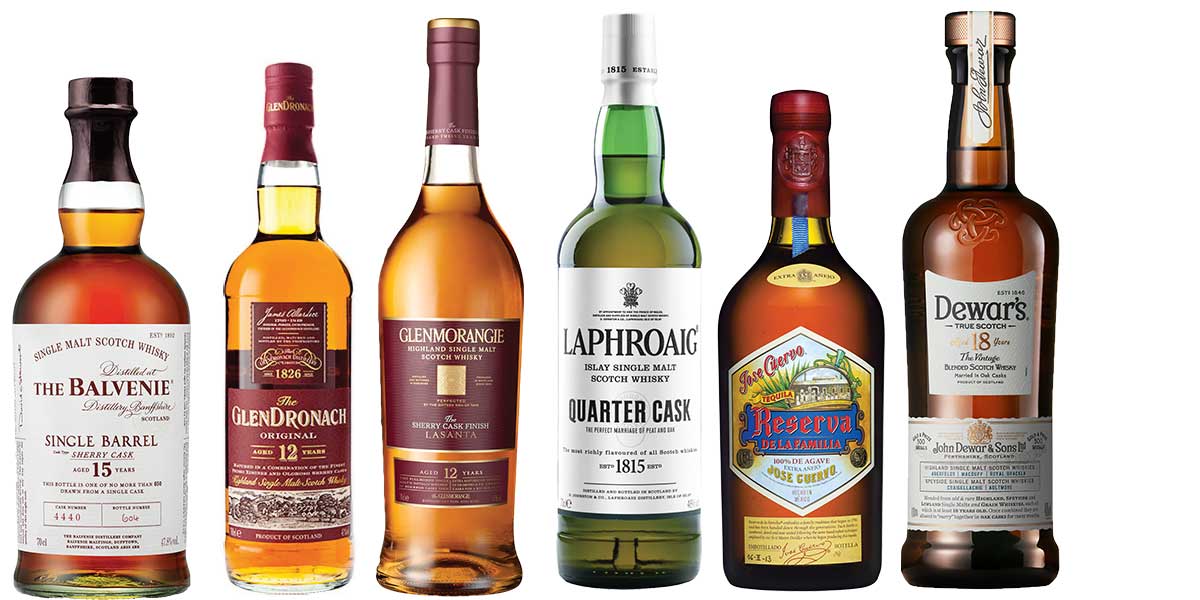 The Balvenie 15 Year Old
If you need proof of the barrel’s influence on a whisky, just take a look at the colour on this one, which has seen 15 years in an ex-sherry cask. William Grant & Sons

Glenmorangie Lasanta
This single malt matures for 10 years in ex-bourbon barrels before it spends an additional two years ageing in oloroso and PX sherry casks. Moet-Hennessy

The GlenDronach Allardice
One of the iconic sherry bomb whisky, GlenDronach themselves describe a quality sherry cask “as vital an ingredient in our whisky as the water that runs off the hill or the barley that grows in the fields.” Brown-Forman

Laphroaig Quarter Cask
For this expression of the famously peaty Islay malt, the whisky matures in ex-bourbon barrels much the way the usual Laproaig is matured, before being transferred to smaller quarter casks — also made from American oak — which gives the whisky greater contact with the wood. CCA/Beam Suntory

Jose Cuervo Riserva de la Familia
This extra anejo, 100 percent agave tequila is a prime example of what happens when you take great agave spirit and allow it to mature; the result is a tequila with the qualities and complexity of fine, aged whisky. Proximo Australia

Dewar’s 18 The Vintage
Dewar’s 18 is aged 18 years, then blended, before it sees another six months of ageing to bring all the flavours together. This double ageing process happens with each of the aged Dewar’s bottlings. Bacardi-Martini